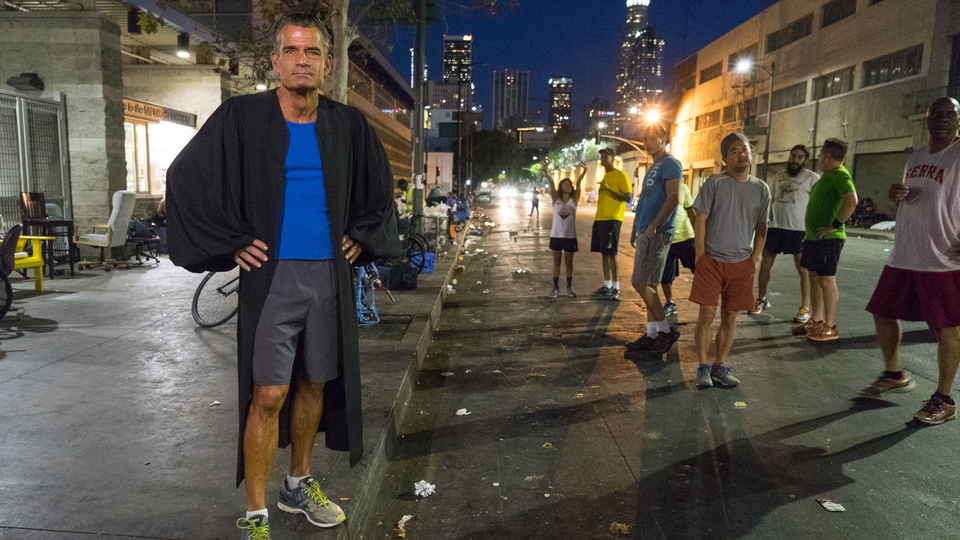 Skid Row Marathon, the documentary that has taken the US by storm, has just released a new trailer and pre-order tickets can now be purchased from a dedicated website.

After amassing an incredible 13 awards from 10 different US film festivals during the 2017-2018 season and critical acclaim in the US press, documentary Skid Row Marathon is having its first official cinema release in the UK this Summer.

The film will be will be distributed by CinEvents as an exclusive, one night only, Event Cinema release on Wednesday 9th May 2018 in selected multiplex and independent cinemas nationwide. The film will be released in association with The Big Issue, Runners World and The Running Charity.

The founder of parkrun Paul Sinton-Hewitt CBE, the bestselling author and journalist Byrony Gordon as well as Emmerdale favourite Tony Audenshaw also feature. The 10 minute short focuses on what running means to them and how it has helped and inspired them in their lives.

Skid Row Marathon is the truly heartwarming and inspiring story of an unlikely group of individuals from LA’s Skid Row, an area well known for being impoverished and forgotten by society. The feature-length documentary focuses on the story of Los Angeles Superior Court Judge Craig Mitchell over a period of 4 years as he coaches a long-distance running club from the Midnight Mission on LA’s infamous Skid Row.

Using the liberating power of running, the marathon training raises the spirits of Skid Row’s inhabitants and gives them a sense of purpose and a new lease of life. If club members refrain from drug abuse, stay off the streets and out of prison, the Judge will take them around the world to run marathons.

Directed by Mark Hayes, this moving film documents the runners as they fight the fierce pull of addiction and homelessness at every turn. It’s a story about second chances and overcoming obstacles. With the surge in numbers of rough sleepers in the UK in the past year, Skid Row Marathon acknowledges the devastating effects homelessness can have. It showcases what the discipline of running and the power of friendship can do to change lives.

Skid Row Marathon was produced by Gabriele Hayes and Doug Blush. Blush is an award-winning producer, editor, and director who has worked on such films as 2018 Academy Award Best Documentary winner Icarus, 2012 nominee The Invisible War, and 2013 Oscar Winner 20 Feet From Stardom.

A number of exclusive preview screenings will be available during the registration period of The London Marathon at 02 Cineworld and Everyman Canary Wharf. On Saturday 22nd April at 02 Cineworld there will be a chance to see the film followed by a live Q&A with Judge Craig Mitchell.

Head to www.skidrowmarathontickets.co.uk to book tickets.