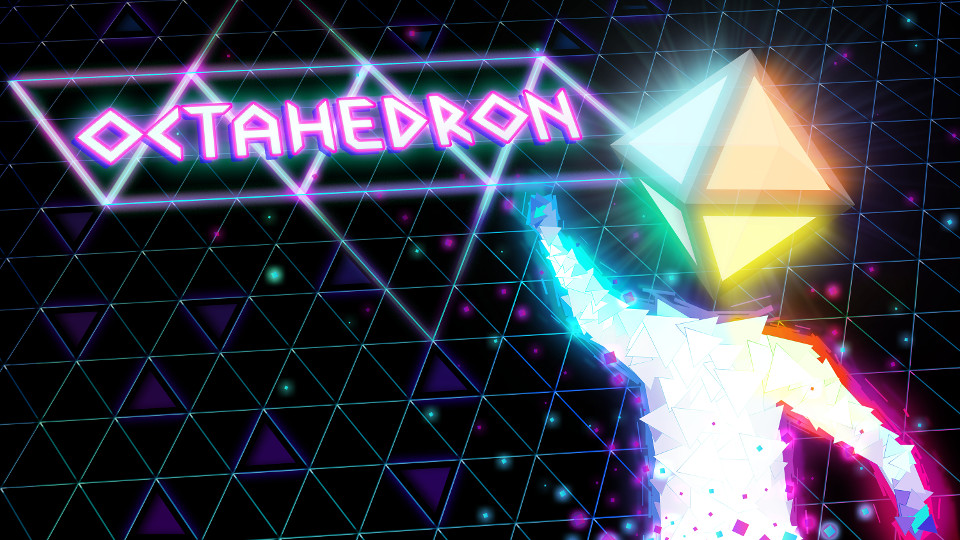 Octahedron is a geometric puzzle platformer that simply dazzles the senses. The story is a thinly-built one–what can only be described as a normal being being sucked from a dull existence into a surreal world of light and sound.

The developer, Demimonde, achieves an immersive aesthetic that’s hard to look away from. The gameplay of Octahedron is simple. You must get to the end of each board, equipped with the ability to manifest an electrical platform of your own–which has its own threshold timer on it. You can tap to just have it appear, or hold it out for the few seconds it remains for to strategically reach new heights and make your way around. It’s a simple enough concept–most of what Octahedron does forces you to interact with what the level itself environmentally has. It’s brilliant, simple and can be quite hard.

From the main menu, to the level select screen, to the actual levels themselves–Octahedron does not disappoint with gripping neon backdrops. The whole of the game is so slick and stylized, that I find myself wishing my computer menus in real life looked like this. Your little person jumps around leaving trails of light, enemies attacks and movements are also laced with brilliant colours. You’re meant to jump over, dodge and time for correct advancement.

Watch the Octahedron launch trailer below:

The wonderful look of Octahedron is just as solid as its soundtrack. A somewhat ambient, thumping electronic sound to it–it works to put the cherry on top of an otherwise amazing cake. Reminding me of titles such as Electronic Super Joy, Octahedron takes a solid stake in the world of retro-wave platformers. A big difference between those two titles however, is that Electronic Super Joy is timed in the pacing of the screen moving forward–so essentially you have to keep moving or you will ‘die’. In Octahedron, there is no timer, physical or otherwise. You can work your way through each level at your own comfortable pace. The trick here is that even though the game gives you the time, it does not necessarily mean it makes it easier to get through. Maneuvering your way, often vertically, can prove to be a worthy challenge. Mirroring a lot of classic Metroid-esque level climbing, all it takes is one false step and you’re back to square one as your player free-falls from top to bottom.

You’re tasked to collecting various shapes throughout the level. At the time of completion, you’re given a screen illustrating the various contents of the board. As with the platforming, they start you out gently, able to reach and use tutorial-like maneuvers, reaching everything without problems. As time goes on however, the items are scattered, more tricky to find a way to. The challenge to reach the top and complete the overall level begins to intertwine with the passion for the hunt of collecting.

I close with a high recommendation for Octahedron. It’s a game that doesn’t intimidate and builds the skill level smartly as it goes along. It’s fluid, engaging and wonderfully addictive. The learning curve is quick, lasting and hard to master. Being easy on the eyes and ears, it’s not much of a chore to really get yourself into the underground world of Veetragoul. If you decide to give Octahedron a try (the demo is available on the Steam store), chances are you won’t be disappointed.

View some screenshots from Octahedron in our gallery:

Octahedron was reviewed using a digital code supplied by the publisher.