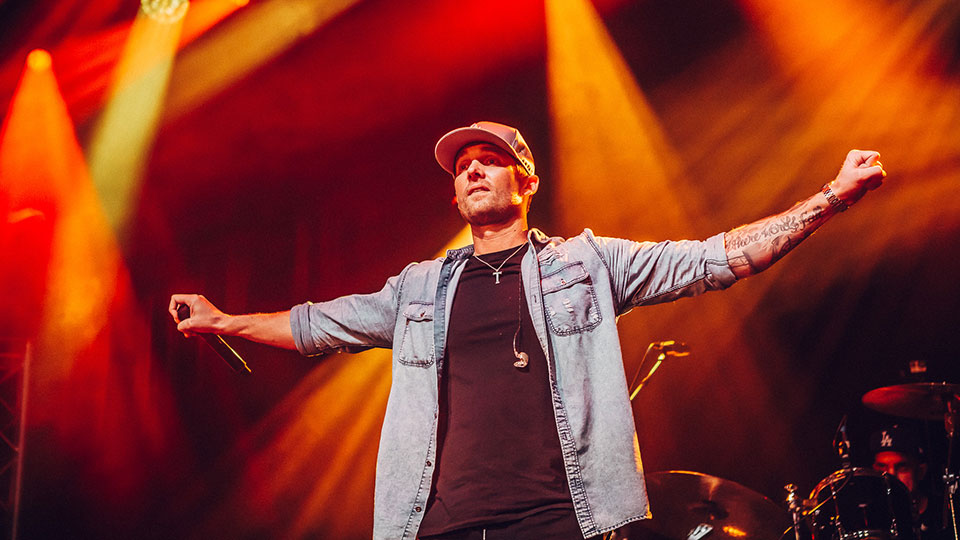 Brett Young was one of the most popular performers at C2C: Country to Country 2018 last weekend.

In London he performed on the Spotlight Stage on Friday 9th March and that night he headlined the aftershow party, which was the only one to sell-out. The performances marked his second time performing in the UK following his support slot on Lady Antebellum’s You Look Good World Tour in 2017.

I caught up with Brett backstage at The O2 Arena ahead of his performances to discuss new single Mercy, find out the status of his new album and to discuss the reception he’s received from UK fans.

Since I last saw you, you got engaged. Congratulations! The photo on social media was very sweet. Is there a date set for the wedding?

No, there’s not yet, only because we’re still looking for the venue. We have an idea of the time of year but it will probably keep shifting as we fall in love with venues that don’t have our date available. Realistically probably sometime in late October or early November.

Mercy is the fourth single from your self-titled album. Why did you decide to pick that one?

I think Mercy was the only one of the four that picked itself. We had the opportunity to go out on my first headlining tour at the end of last year and we mixed it into the set. It was the only one that people hadn’t heard at radio that they were singing back every night. It got to the point where we had it in our encore. We’d go offstage and people wouldn’t be chanting for Sleep Without You, they’d be chanting for Mercy. We thought, ‘this hasn’t even gone to radio yet, we can’t ignore this sign’. It’s been one of my favourites on the record from the very beginning but the fact that people were reacting that way to it before it was even at radio, was just kind of a no brainer for us.

It’s such a beautiful song. Where did the story for that one come from?

I went into a write with one of my favourite artists and writers, and it was our first one, his name is Sean McConnell. I said, ‘you know the only thing I really need for the for the album is like more uptempo songs’ and he said, ‘I don’t really care about that, I just want to write the best song we can write’. That’s one thing I love about him; he’s like a purist when it comes to songwriting. We were in the middle of the get to know you conversation because it was the first time we had ever met, and I just said the word ‘mercy’ in the conversation about something else and he goes, ‘oh I want to write that title. Can you connect to that in any way?’ I said, ‘well you know if we’re talking about a relationship, that kind of makes me think about somebody that breaks your heart but then doesn’t quite let you go’ and he goes, ‘I love that, let’s chase that down’. We both in our past had had enough experiences in that type of situation that once we decided what the song was going to be, it fell out really fast. We wrote it in about an hour. I love when songs happen like that because sometimes the ones that come out the fastest are the ones that you have the most experience with. They’re the most honest and I think honesty bleeds through this song. I think it takes everybody to a place where they’ve been, where they can connect.

When we caught up in October you were about to head out on your debut headline tour. We spoke to Carly Pearce, who supported you on that, in December and she was telling us what a fantastic time she was having. What was your experience like?

It was great. It’s always a little bit intimidating the first time you decide to do what we call ‘a hard ticket’. All the other shows I’ve played I was an opener for somebody else who were responsible for the ticket sales, I just got to go play for their fans. It’s a real kind of opportunity to see what type of fans you have, if they buy tickets and if they come to your shows, if they know more of your record than just your singles. Not only was it very telling but it was a blast. We sold out the entire tour and Carly came out and did a great job. We learned a lot about ourselves. We got 75 minutes instead of 25 minutes every night and so wthe band had to really put it together and learn the whole record. By the end of it I think we all felt better and stronger because of the tour and we got to know our fans and what we’re working with moving forward.

You got an incredible reception here when you supported Lady Antebellum. There was such a buzz about you after the performance. How did you feel about your first time playing for UK audiences?

It was such a good experience. It’s scary coming to a new city, let alone a new country to play for the first time. You don’t know what you’re going to be met with in terms of fans. You don’t know how much you’ve been heard. It was interesting because people stay seated, which is not what we’re used to. In the States it means that they’re not enjoying themselves so they’re not engaged but here it’s the opposite. They’re very respectful, attentive Country music fans and we had a great experience. I feel like because I saw that that was the type of fan we had here I changed my set and we slowed things down. We mixed in a cover of Hallelujah, if people were going to be reverent like that and listen. It was a really special experience and from that moment we were really excited to come back. We’ll see what everybody thinks about the full band this time.

When it was announced that you were performing at the after show party, tickets sold out pretty quickly. You must be feeling confident about coming back for a headline tour now?

Yeah absolutely. A big part of the reason to come for these things is to to build your audience so that the next tour you put together you can come over and extend it. Seeing the sell out is actually really encouraging. It’s really hard to bridge the gap because you can’t be over here as much as you’d like to be but the fact that we’re getting the response that we’ve been getting, makes us excited to come back.

We’ve actually been in the studio quite a bit. We’ve already recorded nine of the 12 for the next record. That’s a great place to be in because we feel extremely solid about all nine, and it’s probably not going to come until the tail end of summer at the earliest. I know what the three songs would be, or at least roughly, it gives me a lot of time to try to beat songs as a songwriter now. We’ve been in the studio and the songs sound amazing. I can’t wait to share the new music. I’m trying to write three more that I’m really fired up about and I feel good about the rest of it.

I saw on Instagram that you’ve been working with Shane McAnally. He posted a photo of you recording…

Yes, I did. Me and Shane have written together twice, once in the month of February and once last week. We wrote a song together – myself, him and Jimmy Robbins who is one of my favourite writers – and I think that was a little Instagram story of me doing vocals on the demo for the song we had written that day.

Peaking around the curtain (laughs) yeah! He kept trying to get that picture of me and I kept trying to not let him in, and then one time I peeked out to say something, he got it and I went, ‘oooohhh!’ He’s a funny guy.

I’ve been talking to a lot of artists recently about how streaming is infringing and contributing to the decline of physical releases. You’ve managed to avoid that as your album has performed strongly on both formats but do you feel the pressure because of the growth of streaming?

I do feel like that is something that’s kind of out of everyone’s control. If that’s how people want to consume music, that’s how they’re going to consume music. I think that whole thing I was talking about earlier, about connecting with people, I think if you can put out music that people feel really, really connected to they’re going to want to own it. They’re going to want to have a physical copy. That will probably continue to dwindle but I don’t think it will ever completely go away because I think real music fans… I mean that’s why you still see people lined up at a merch booth after a show. Real fans want to hold something in their hands and I’m that way. Something that I’m in love with, I want to have a physical copy and so I don’t think there’s anything that is going to be able to be done about streaming. It’s a very popular way to consume music. I think there’s always going to be the dedicated hardcore music fans that are going to want to buy physical music.

Country music seems to be the one genre where physical sales are still strong. Fans want to connect with the artists and they want to have those physical products. Maybe Country will be the genre to buck the trend?

Are you going to get any time to sightsee on this trip to the UK?

Probably not anymore. Yesterday we got in early enough and we didn’t have a show. The last time I was here I didn’t go to Soho and so we jumped on the train and we met the band in Soho, we had an awesome dinner and we did a little… in the States we call it barhopping but here we call it pub hopping?

Pub crawl, yeah! I just got to see a different part of London that I didn’t get to see last time. The next three nights we have shows every night so probably not a whole lot of sightseeing. Still regardless I love the culture over here and getting to experience a lot of that through the people and I’m having a blast.

Brett Young’s self-titled album is available now as is his new single Mercy. Watch the video for Mercy below: