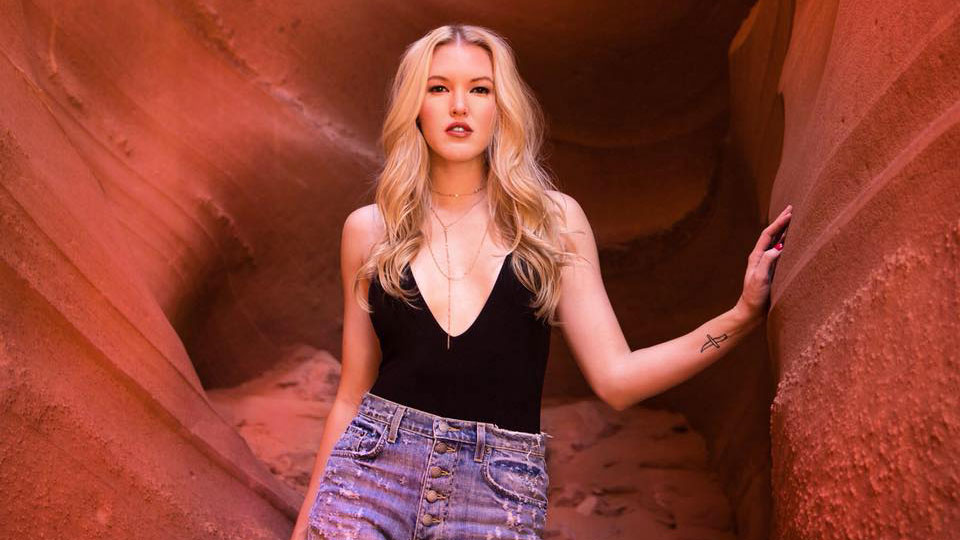 As the daughter of the late great Glen Campbell, it’s safe to say Ashley Campbell has some big musical shoes to fill. Yet she’s been steadily carving out her own path in the industry over recent years, leading up to the release of her debut album The Lonely One earlier this month. After performing at C2C Festival last weekend she’s been travelling around the UK as part of the C2C Roadshow, with a final show at London’s Borderline last night.

Campbell and her band – brother Shannon on guitar and violinist Eli – opened their set with Better Boyfriend. The song started with just Campbell’s vocal and the violin, showing the sweetness and soulfulness in her voice, before she moved into a driving banjo rhythm that complemented the biting lyrics. It put a different spin on the album version of the track and I liked that it had that more traditional vibe.

During her set Campbell mainly stuck to tracks from The Lonely One, including the midtempo wistful A New Year (where her and Shannon’s vocals combined beautifully) and the romantic Old West melody and kiss-off lyrics of the title track. She also got a huge cheer at the mention of ‘Willie Nelson’s son’ on the upbeat, soaring Nothing Day and seemed slightly in awe of the crowd singing along.

Throughout her performance Campbell moved about on stage a lot, dancing along and jamming with her band. She played her banjo like a rock star, getting low to the ground and throwing herself into the music, and it looked like she was having a great time up on stage. I also found her stage presence really warm and engaging. She frequently broke off to chat with the audience and was quick-witted and lively, joking about the snow and being booed ‘in a good way’ at C2C after her Spotlight Stage set was cut short, and even going off on a tangent about a ghost cruise!

For me Campbell particularly stood out on the slower numbers. Good For You had a nice richness added by Eli’s violin playing and Campbell really brought out the bittersweet feeling of the lyrics, whilst the gentle, folk-influenced Wish I Wanted To struck a great balance between hopefulness and uncertainty. Both songs were very simple in their arrangements, but I felt that worked in their favour as it gave them much more emotional impact.

After a rendition of her dad’s classic song Gentle On My Mind, which brought out the richer tones in her voice and showed off her impressive banjo playing skills. Campbell performed her moving tribute to him, Remembering. The dreamy intro worked wonderfully with her sweet clear vocals and I’m sure I wasn’t the only person in the crowd who shed a tear.

Campbell closed her set with the stomping, humorous Looks Like Time before she brought Mo Pitney back out on stage for an encore. The two of them performed a version of Dolly Parton’s Jolene, which had a very strong sense of resignation and pleading, before duetting on Johnny Cash’s I Still Miss Someone. Their voices sounded great together and they had good chemistry on stage, and I’d love to see them duet together again in future. For their final song, they played Old Home Place, and got the crowd clapping along to the driving rhythm and their duelling guitar and banjo solos.

Overall Campbell delivered an enjoyable set with a fun atmosphere. I really loved that she put a more traditional spin on the songs from her album and was seriously impressed by her banjo playing skills – she seems to get better every time I see her. It’s clear she loves performing too and her enthusiasm was infectious, but also did a great job at balancing the upbeat moments with songs that tug at your heartstrings. She’ll be back in the UK this summer to perform at Black Deer Festival and I think that attendees will be in for a treat.