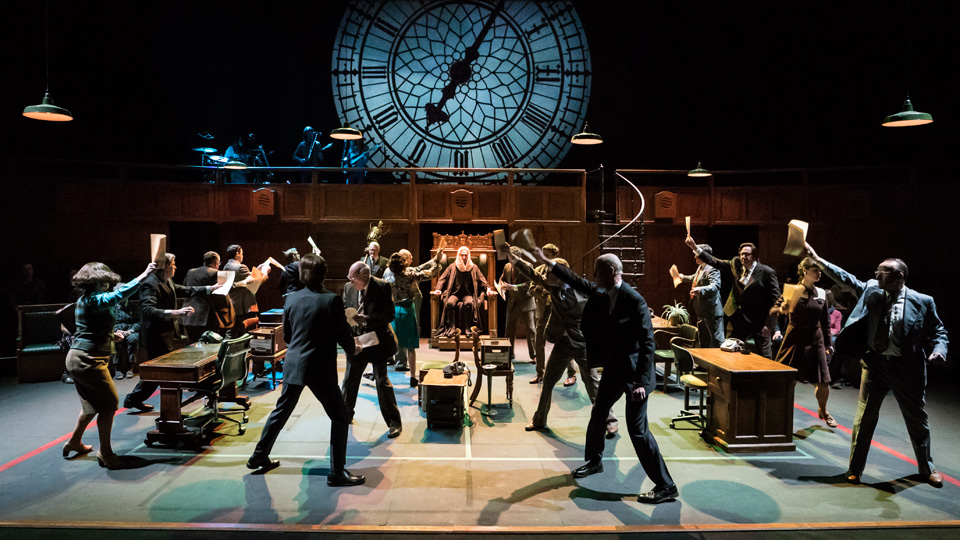 The year is 1974 and the location is Westminster – specifically the secluded offices of the Labour and Conservative Chief Whips. Following Heath’s snap election in February, Labour has made major gains over the Conservatives, but not enough for a majority. Amidst a hung parliament where every vote of support counts, This House retells the frantic story of the whips’ battle to secure power for their parties in a rapidly changing Britain.

James  Graham’s script is a caustic combination of Yes Minster’s wit and The Thick of It’s boisterous, documentary realism. Characters are written with a comic-strip vibrancy, recalling a time when big personalities were shouldering positions of power. There are no stand-out heroes in the writing and both parties are treated with balanced ovations, or perhaps equal contempt.

1974 is presented as a macho world of loud-mouthed, competitive alpha males. It is, however, a world that is steadily changing. Whilst two parties are fighting out the semantics of left and right, a third movement is thriving among the disputes of men: women are becoming strong influencers across constituencies and by 1979 a new, female leader is preparing for power.

A large cast is headed up by James Gaddas in a gruff and tough performance as Labour deputy chief whip Walter Harrison. The character is a mammoth of a man, brought brilliantly to life with a bombastic arrogance, whilst rounded with a true poignancy in his final scenes. A perfect contrast is presented by Matthew Pidgeon as true blue whip Jack Weatherill, whose steely yet multilayered delivery breathes a human complexity into the opposition. Reassuringly, these figures offer a range of human depth which goes far beyond the colour of their rosettes.

A large ensemble provides a landscape of hilarious characters which are performed with a bullish bravura. William Chubb is brilliantly steely as Humphry Atkins, a didactic expert in political protocol. Giles Cooper as the new kid in the office is a brilliant foil and provides a fresh optimism to an entrenched organisation. Harry Kershaw and Louise Ludgate secure plenty of laughs through a vast offering of grotesques, displaying some impressively swift costume changes.

Jeremy Herrin and Jonathan O’Boyle bring innovative direction to a large, beautifully dressed set which successfully evokes the historical grandeur of the House of Commons. Surreal choreography combined with relentless movement evokes Westminster’s scale, whilst ingenuously painted service lines on the floor – not unlike a tennis court – demark the barriers between offices and hint towards the sport, games and machinations at play.

Equally evocative is the huge icon of Elizabeth Tower’s clock face, which looms over the stage in a reverse perspective from the interior of Big Ben – a powerful visualisation of the inside view of The House and a timely reminder of the transitory nature of power.

Importantly, the show captures not just the politics but also the earthtone fashions, scent and sounds of Britain in the Seventies. Between the whiff of cigarettes and many subtle cultural references, This House is enriched with an underscore from a charismatic band who oversee the action from above court; punctuating the drama with short, sharp rock interludes which brilliantly transition into the anarchy of late-Seventies’ punk.

This House is a balanced, penetrating exploration of the corridors of power at a critical time in Britain’s history. A boisterous examination of the volatile tug-of-war between the Labour and Conservative parties, this play exposes the differences and the similarities between the left and right wing, whilst bringing the political tensions of the Seventies into focus with an astonishing, sobering relevance for today. Go see.