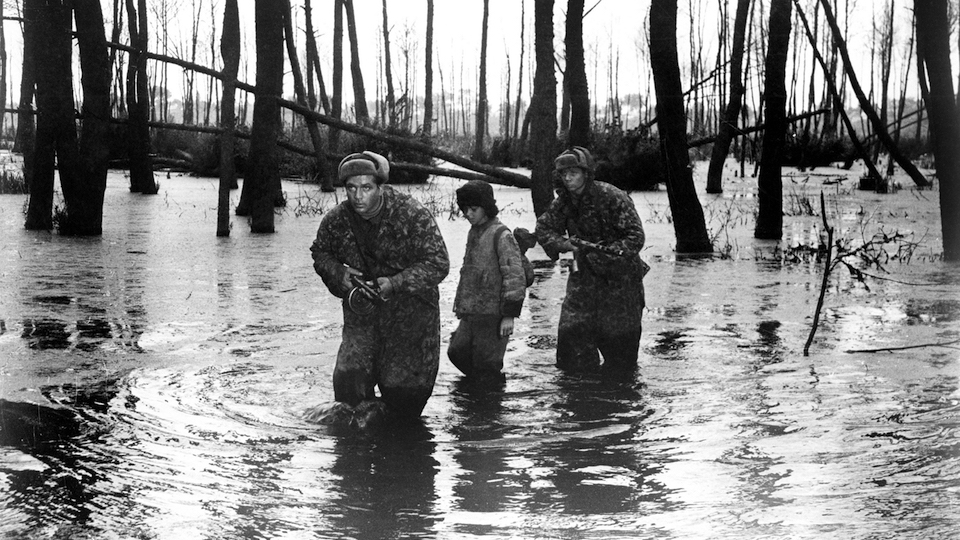 No matter how much talent you have, sometimes your big break comes about through pure luck; or the incompetence of others; or the exacting standards of the Soviet film industry. Or in the case of Russia’s most celebrated film director, Andrei Tarkovsky, it was all of those things.

The adaptation of Vladmir Bogomolov’s novella Ivan was initially given to Eduard Abalov, a film director destined to become a cinematic footnote. When Mosfilm saw his footage, they were deeply unimpressed and sent him packing. Hot off the success of his calling-card graduate film, The Steamroller and the Violin, the production was handed to Tarkovsky, and the cinematic landscape changed forever.

The film follows Ivan (Nikolai Burlyaev), a 12-year-old boy who is working as a scout for the Russian military during World War II. Tarkovsky intersperses his narrative of Ivan’s war-ravaged childhood with dreams and flashbacks to an idyllic rural life with his family, before the trauma of war destroyed everything.

I’ve said it before, but seeing the films of Tarkovsky restored into high-def is a thing of transcendent beauty. Not every film can withstand the crystal clarity of HD, but with Tarkovsky, it enables us to see the full extent of his vision. This particular release from Criterion looks absolutely fantastic.

As a hired gun, rather than the originator of the project, Ivan’s Childhood lacks some of the visual poetry of his later masterworks, but nonetheless remains a beautiful and highly influential piece of cinema. Tarkovsky pulls no punches in his depiction of Ivan’s external world, the harrowing and heartbreaking realities of war. But his internal world, where he dreams and remembers his life from before are moments of pure innocent joy. By the time we reach the deeply poignant final moments of Ivan’s Childhood, you cannot fail to be moved by what we have seen.

Not one of the most packed discs Criterion have ever put together, but the supplementary features we have will definitely satisfy the die hard Tarkovsky fans among you. First up is the 30 minute featurette Life as a Dream – an in depth interview with film scholar Vida T. Johnson, the co-author of The Films of Andrei Tarkovsky: A Visual Fugue. Recorded in 2007 exclusively for Criterion, Johnson discusses the significance of Ivan’s Childhood in Tarkovsky’s body of work.

The rest of the features are interviews with lead actor Nikolai Burlyaev and cinematographer Vadim Yusov. Burlyaev offers heartfelt memories of his time making the film and working with Tarkovsky. Yusov, who would go onto shoot two of Tarkovsky’s masterpieces (Andrei Rublev and Solaris) reminisces in this 2007 interview about his work on Ivan’s Childhood.

Also included is a booklet featuring an essay by film scholar Dina Iordanova; “Between Two Films”, Tarkovsky’s essay on Ivan’s Childhood; and “Ivan’s Willow, a poem by the director’s father, Arseny Tarkovsky.