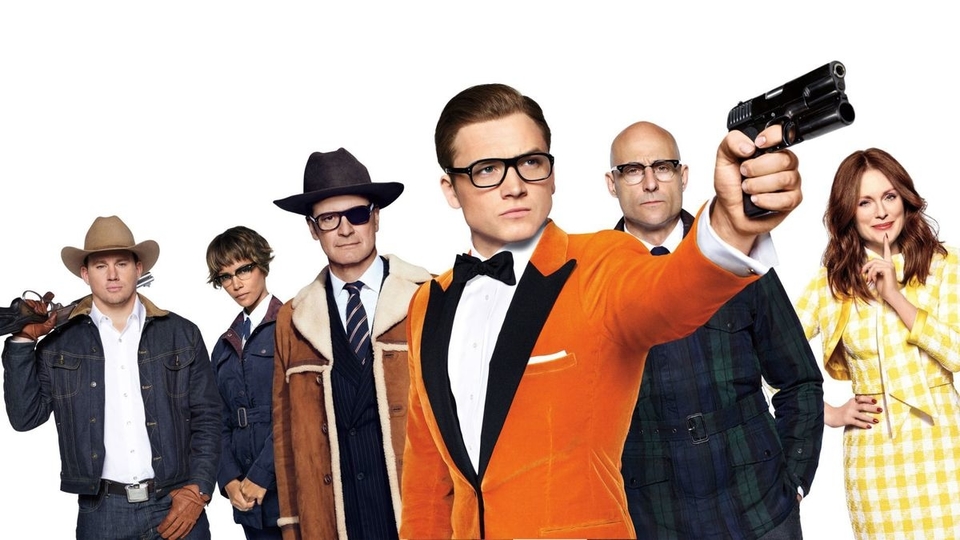 When Kingsman: The Secret Service debuted in 2014 it wowed audiences and came out of nowhere to become a massive box-office success the world over. Its heady mix of R-rated action and genuine comedy made it a perfect blockbuster for today’s audiences. Now the inevitable sequel has landed and for the most part it is an enjoyable and entertaining ride. I suspect a third chapter will fare better as Kingsman: The Golden Circle seems to get a bit jumbled towards the end, and makes some curiously bold choices in narrative that seems to limit its scope going forward.

The set-up to the sequel is simple – Gary ‘Eggsy’ Unwin (Taron Egerton – Eddie the Eagle) is now a fully-fledged Kingsman and is thrown into a new threat when  ex-Kingsman recruit Charlie (Edward Holcroft) resurfaces and wages war on the institution. Suffering some devasting losses, Eggsy and Merlin (Mark Strong – Miss Sloane) uncover the Golden Circle, an elite club of criminals led by megalomaniac drug dealer Poppy (Julianne Moore – The Hunger Games: Mockingjay – Part 2). If they are to bring the organisation down, they’ll need help from their American cousins The Statesmen, led by Champ (Jeff Bridges – Hell of High Water) and with agents Tequila (Channing Tatum – The LEGO Batman Movie), Whiskey (Pedro Pascal – The Great Wall) and Ginger (Halle Berry – X-Men: Days of Future Past) in-tow.

The film keeps the tone of the first chapter well with Taron Egerton once again leading the line exceptionally well. Mark Strong is as reliable as always and the inclusions of Tatum, Bridges, Pascal and Berry are surprisingly effective. But it’s the return of Harry Hart (Colin Firth) that really raises a smile and it’s great to see him back onscreen. There’s solid support from the likes of Hanna Alström who reprises her role as Princess Tilde, Poppy Delevingne, Bruce Greenwood and Emily Watson. The rapport between the entire cast makes the film a joy to watch and the comedy always lands where it should.

One of the standout set-pieces of the first film was Colin Firth’s infamous church fight scene which was simply blistering to behold. This time around, it seems that the filmmakers have really struggled to deliver something of equal worth. The big set pieces of The Golden Circle rely too heavily on CGI, some of which is uncharacteristically shoddy.

The opening taxi chase across the streets of London is a prime example, which renders this more of a cartoon than an action film. The introduction of The Statesmen gives the Kingsman world an expansive reach, but I feel that it has come at the expense of the Kingsman themselves, whose ethos should have been explored much more here. Poppy Land, the bizarrely brilliant theme park hideout for Julianne Moore is full of great potential but it’s hardly used, despite looking very expensive to build.

It’s biggest failing is not utilising Julianne Moore nearly enough. Frankly, she’s hardly in it given that she’s the main villain. One of the reasons the first Kingsman was so good was the fact that Samuel L. Jackson was front and centre a lot of the time. Julianne Moore’s character has all of the ingredients to deliver something similar, with a hilarious bloodlust that’s great to see play out onscreen. Moore still steals every one of her scenes and is an utter joy to watch, which is why it’s such a shame that she’s curtailed here.

Kingsman: The Golden Circle always threatens to be amazing and it just falls short. But it’s bags of fun nonetheless and guarantees a great night’s escapism at the pictures. Plus the novelty factor of having Firth back onscreen is worth the admission price alone. I also usually hate celebrity cameos in movies, but Elton John’s appearance is amazing and truly hilarious here. With a set-up for a third chapter laid down, I hope it learns a few lessons and instead channels the first film a little bit more as the story of the Kingsman is explored further.