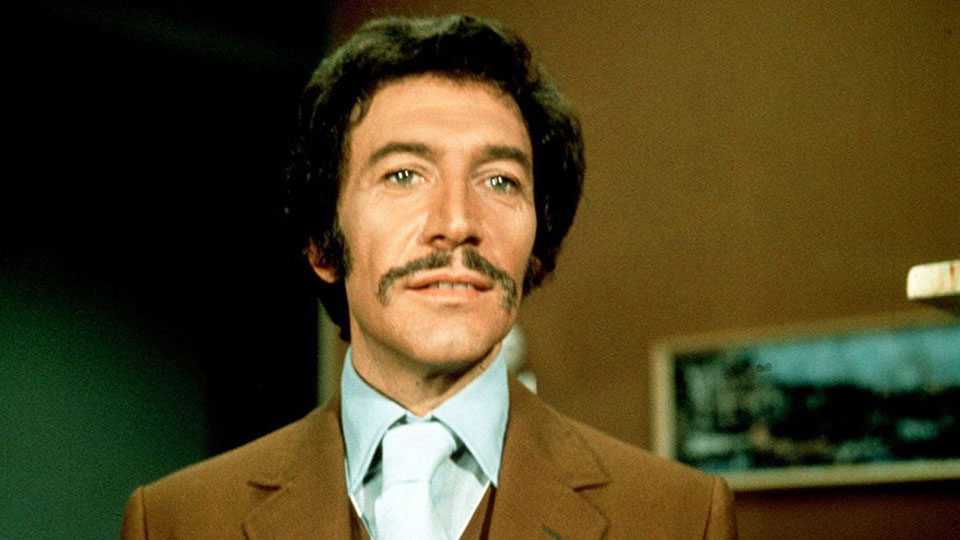 The actor Peter Wyngarde, best-remembered as the flamboyant sleuth Jason King in Department S and his own spin-off series, has died at the age of 90 (ish).

Peter Wyngarde, whose origins, real name and date of birth are subject to much debate, is believed to have been born in 1927 (or there abouts). He became an extremely experienced stage actor on the West End before breaking into television in the early days of the 1950s. By the 1960s, his star was on the rise. He made a compelling dashing hero in a 1964 adaptation of Noel Coward’s Present Laughter, which still exists in the archives. But it was for Lew Grade’s ITC that he truly made his mark. He appeared in many landmark series of the 1960s, including the most iconic of the lot – the Prisoner – playing one of the ever-changing nemeses to Patrick McGoohan’s hero in the episode Checkmate. He was in two episodes of The Avengers, including one in which he was head of a kinky “Hellfire Club”, as well as two episodes of The Saint with Roger Moore.

His performances in the ITC shows led to his casting as Jason King in Department S in the late 1960s. Originally intended to be a supporting character played by an older actor, leaving the dashing leading man stuff to the younger Joel Fabiani, the concept of King was a fusty academic. Wyngarde wasn’t having a bit of it, and he turned Jason King into an outrageous dandy, designing the incredible suits and revealing outfits himself. He claims the bouffant was all his own work (that’s debatable) – but the handlebar moustache certainly was, and it stayed on Wyngarde’s upper lip for much of the rest of his life and career.

Department S was a hit with viewers, but lasted only one season. The character of Jason King – the best element of the show (which had episodes of variable quality) was retained for his own series – and Jason King ran for two seasons. Shot on cheaper film, and using extensive stock footage in place of actual international locations that the budget wouldn’t stretch to, Jason King is undeniably silly – but Wyngarde makes the most of his moment in the sun, and is never boring. It attracted guest actors of considerable quality.

After his heyday of the 1960s and early 1970s, Wyngarde’s career took a downturn owing to revelations about his private life and subsequent scandal. Nevertheless, you can’t keep a good man down, and he clocked up several more major cult classics.

He played Ming the Merciless’s right-hand man Klytus in Flash Gordon, appearing behind a golden mask, where he is eventually bumped off by Timothy Dalton. He was natural casting for Planet of Fire, by far the campest (against stiff competition) Doctor Who story ever made: the 1984 adventure was shot on Lanzarote and featured companions in a speedo and bikini. His final TV appearance came a decade later at the end of the magnificent run of Sherlock Holmes – the only screen adaptation of the greatest detective’s stories that matters – where he got on like a house on fire with star Jeremy Brett.

Peter Wyngarde – known affectionately as Petunia Winegum in the profession – often wore shoes with large heels to increase his stature on screen. There are rumours he was captured and tortured in a Japanese prisoner-of-war camp during WWII. The air of mystique that surrounded him throughout his life was something he took delight in. He had a lot of time for fans, and regularly attended conventions to sign autographs, right up to the end of his life.

And if you’ve never heard his musical album – When Sex Leers its Inquisitive Head – you really should. A near-masterpiece, but it has to be heard to be believed… Let’s get it to Number One in the iTunes charts…

The world is a little more dull today. 2018 is the year we lost Peter Wyngarde, one of the great flamboyant actors of the Twentieth Century. He was a damned fine actor, too.