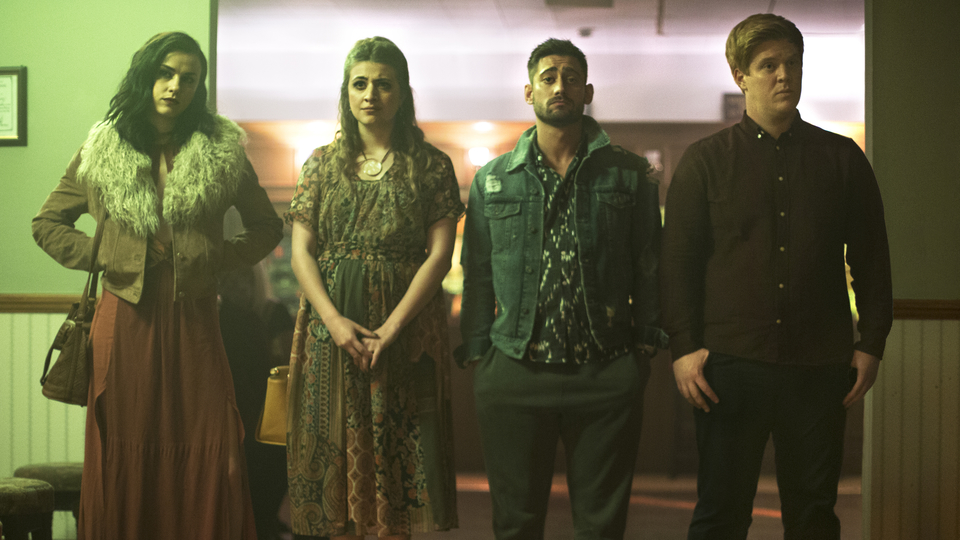 Danny Morgan’s funny fable, directed with verve by Benjamin Barfoot, delivers an engaging horror with plenty of moments to savour. Humour is the overriding arch here, but when it wants to, Double Date doubles down on the gore to deliver some great imagery and winch-worthy horror to really push home its story.

Not just content with writing the film, Danny Morgan leads the line as Jim, a 29 year-old nice guy who has just been dumped. He also happens to be a virgin, something that his best mate Alex (Michael Socha) sees as his duty to help him rectify, in the minefield of modern dating. One night in a bar, two attractive girls walk in named Kitty (Kelly Wenham) and his shy sister Lulu (Georgia Groome). They instantly make eyes for Danny, someone who isn’t used to such attention, so he and Alex go on a double date with the girls. But what is Kitty and Lulu’s real motive?

The film starts off brightly and introduces the principal characters really well. Right from the first shot, we see how invested into proper horror the film really is, delivering a visceral murder scene that packs a memorable punch. But comedy is well placed throughout the film and the brutal death scenes link well with the comedy of dating and the everyday awkwardness that Jim experiences talking to girls.

The films strongest link is the chemistry between its leads. Kelly Wenham is fantastic as Kitty, delivering a performance that titillates as much as it scares. Georgia Groome, who you might remember as the lead from Angus, Thongs and Perfect Snogging, hands in a great turn as Lulu, who is having second thoughts about her mission at hand. Danny Morgan plays the everyman well and it’s easy to champion his cause and Michael Socha proves that he is a talent that deserves a lot more exposure.

Some things don’t work in the film and after a strong opening the double date itself loses momentum with an overplayed sequence at Jim’s parent’s house whilst he’s high as a kite, and an extended club sequence that could have been trimmed down. But once those pass, the film quickly builds up steam again, and is given an added adrenalin boost with a scene-stealing cameo from Dexter Fletcher as Alex’s good natured Dad who likes to party.

The film lays out its intentions quite early on so you always have a rough idea of what the girls are trying to do, but crucially, you don’t know why. When the big reveal is made, it’s a great sequence that’s properly scary and very effective. It also includes some incredible fight scenes caked in blood. Double Date is a nice little indie horror that does its story proud.