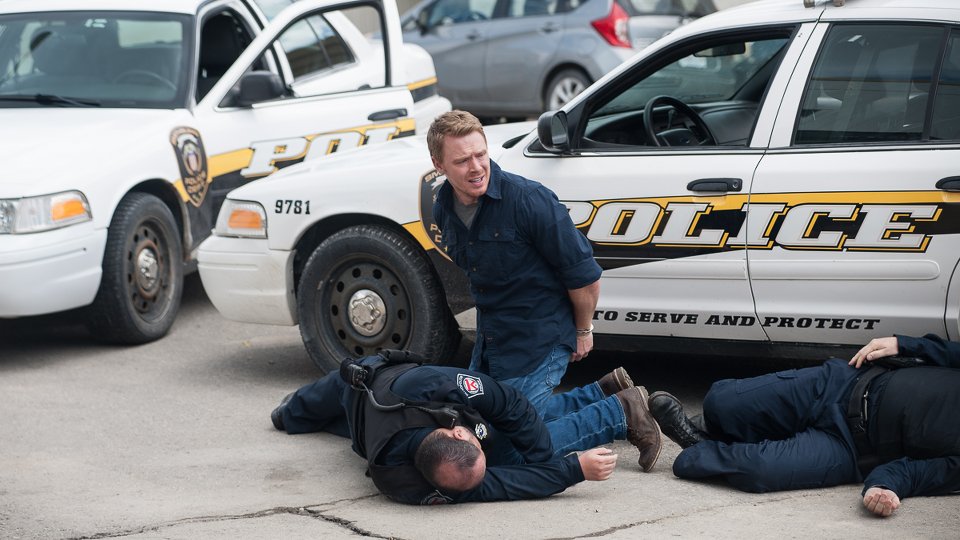 Liam Hartwell (Diego Klattenhoff) wakes up from a car crash with no memory of who he is or what happened. As he puts the pieces of his identity together, he witnesses people dropping dead, fearing that there is a virus circulating in the air. After finding his home, Liam realises that he may be the reason why people are dying and he panics when a woman (Charlotte Sullivan) approaches him. As the two come together, the woman reveals she also has no memory of who she is but she suspects she was in the car crash with Liam. When Liam has no affect on the woman, who calls herself Jane Doe, the two decide to join forces to get to the bottom of what’s really going on.

Radius is high in concept and frustratingly, for this reviewer any way, it doesn’t really go to any length to offer much in the way of explanation. The pace of the film is slow and it takes a while to get going as it establishes the set-up. Once the crux of the movie is revealed, it picks up a bit as Liam and Jane reluctantly work together but the uneven and choppy pacing remains problematic.

Unfortunately the film isn’t without its issues. The script lets it down throughout with far too many mentions of ‘god damn’ when there really is no need. The dialogue could have done with a bit of editing and extra polish, and it doesn’t particularly serve the actors all that well. The performances of Klattenhoff and Sullivan are a bit stilted and they fail to create much chemistry. For most of the film they ponder questions to one another as flashbacks reveal the moments that led up to their crash and ultimately their deadly predicament.

Parts of Radius reminded me of a M. Night Shyamalan film in main part due to the high concept that ultimately failed to give a satisfying conclusion. After the screening the filmmakers were probed about the finer details of the film and they suggested there was no definitive answer to the many questions it raised.

To its credit the film did manage to take things to a place I wasn’t expecting but that pivotal moment isn’t given much time to breathe before the resolution comes and the credit rolls. For a moment I thought the film was going to offer some pay off but I ended up feeling dissatisfied and a bit disappointed.

Going into Radius I heard a lot of buzz about how good the film was. Sadly that wasn’t my experience and it reminded me more of the dreaded Mark Wahlberg stinker The Happening than it did of anything else. On paper the film’s central premise is intriguing with a lot of potential but in execution it feels half-baked and is wholly unsatisfying.