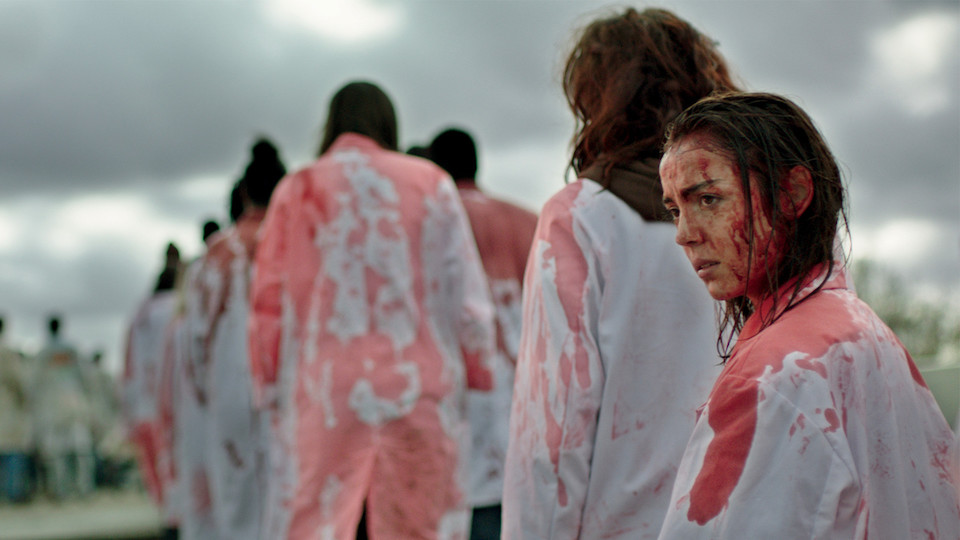 Had Raw merely been a film depicting the savage and debasing cruelty of the hazing rituals at a veterinary school, it would have still been an incredible horror film. As there is so much more to it than that, it is straight up one of the best films of the year. A coming-of-age drama, liberally spattered with dark humour, and dripping with Cronenbergian body horror, Raw is a fantastically assured and thematically rich debut feature from Julia Ducournau. You’ll be picking it out of your teeth for days afterwards.

Justine (Garance Marillier) is starting veterinary school, following in the footsteps of both her parents, and also her older sister Alexia (Ella Rumpf) who is a few years ahead of her. On her first night at the university, the older students begin the fresher’s week tradition of hazing the rookies. It is a humiliating and frightening ordeal. Wearing masks they break into rooms in the middle of the night, turn them upside down, throw beds from windows, and then drag the half-dressed rookies outside. They are treated – and made to behave – like animals, crawling on all fours in a terrifying slow-motion shot through a car park towards a bacchanalian rave.

As part of an initiation ceremony, they are all doused in animal blood a la Carrie, and then forced to eat raw rabbit kidneys. Strict vegetarian Justine wants nothing to do with this, but her sister Alexia forces her to take part and fit in with everyone else. She relents to the pressure, and all new appetites are awoken inside her.

After an initial allergic reaction to the meat, which leads to one of the most uncomfortable scenes I have ever seen in a film, Justine begins to crave flesh. At first, burgers and shawarma do the job, but soon she is tearing into raw chicken, and staring covetously at the body of Adrien (Rabah Naït Oufella) her roommate. The film lurches into extreme cinema territory during an extraordinary scene of bikini waxing, and a freak accident that leads to a finger being severed. Once that little digit has been nibbled on, Justine’s transformation is complete. Where things go from there are best experienced with as little foreknowledge (and as empty a stomach) as possible.

Ducournau directs Raw with astounding style and confidence. The use of colour – all saturated greys and then vibrant shades of red – the long takes, and the nauseating and ominous sound design, all add to the sense of dread Justine is feeling. The score by British composer Jim Williams is absolutely incredible, bringing an almost gothic Giallo feel to the film, which fits perfectly with the modernist house of horror vibe Ducournau creates for the school.

Rich with symbolism, and taking a playful approach to themes of female identity, primal urges, and burgeoning sexuality, Raw is an incredibly stylish, unpredictable, and wholly original piece of art horror. Anchored by an astonishing performance from Garance Marillier, Ducournau’s film is an absolute triumph. I cannot wait to see what she does next. Long live the new flesh.