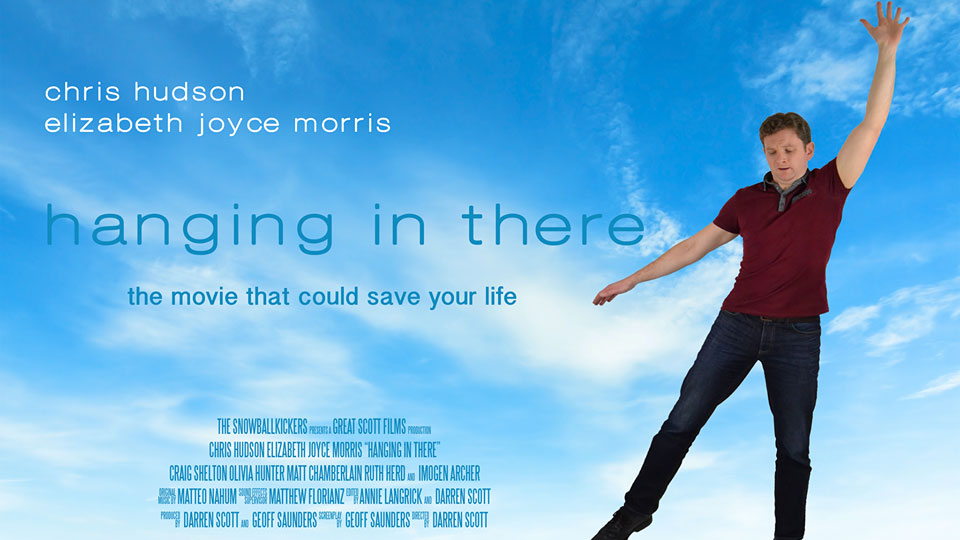 Most people will be affected by cancer at some time or another, whether they suffer from it themselves, or have the worry and pain of facing a loved one’s illness.

Hanging in There is a film that dramatises the journey of Jack Jackson (Chris Hudson) from suspecting something is wrong to receiving a diagnosis of testicular cancer, through to the medical care he receives. Whilst it pulls no punches in tackling the many difficulties of physical illness including an uncertain future, unsupportive friends and marital strain, Hanging in There manages to be for the most-part, philosophical and good-humoured. This is wise on the part of director Darren Scott and writer Geoff Saunders, since a feature length movie dealing starkly with illness would feel too browbeating and brutal.

The film works with a few neat dramatic devices. Reminiscent of Peep Show, the audience is privy to the thoughts of Jack Jackson as he wrestles with his inner dialogue in coming to terms with his illness and the scariness of the treatment. There are also two Jack Jacksons who talk things through with one another, and such a lightness of touch makes the film entertaining and engaging.

The central message of the film is that cancer can strike at any time. Actor Chris Hudson, who makes for an affable Jack Jackson even when conflicted with himself over his situation, is around forty, the lesson being that nobody is too young (or too old) to have cancer, and that a diagnosis can come out of the blue. Playing Jackson’s wife Anna is Elizabeth Joyce Morris, and she skilfully remains sympathetic even as she wrestles with her own difficult feelings about her husband’s illness.

Highlights of Hanging in There are an awkward (if amusing) scene about male embarrassment being given an intimate examination by a female physician, and an honest appraisal of a friendship that runs onto rocky ground when there’s a lack of support following the diagnosis of cancer. These scenes, in contrasting ways, make helpful and important points about serious illness and how people deal (or don’t deal) with it. However, the film isn’t quite the sum of its parts, as some scenes, such as Anna’s meetings with her female confidantes, feel repetitive, and a shorter edit would make the message stronger.

There are also a few on-the-nose lines of dialogue, and one or two too many characters that take the focus away from the leads. Overall, though, Hanging in There is a useful film for anyone wanting ideas on how to support a loved one through cancer; or solidarity for patients themselves. The positive message about how life-threatening situations can also be life-changing (for the better) leaves Hanging in There a good educational tool and a well-constructed drama in its own right that leaves audiences with a positive outlook and plenty to think about.