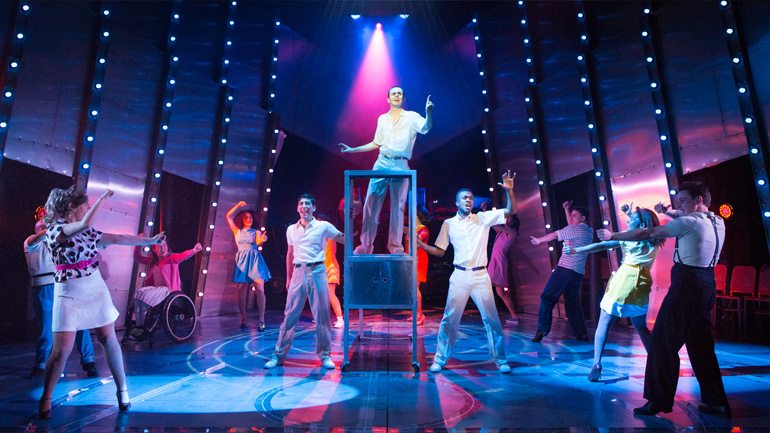 New Wolsey Theatre Ipswich in co-production with Ramps on the Moon brings Tommy – The Who’s rock opera – to West Yorkshire Playhouse this month as part of a collaborative engagement.

Conceived as a concept album and subsequently adapted into a movie by Ken Russell, Tommy first played the West End in 1979 and has since enjoyed numerous revivals. In this colourful new production, Kerry Michael directs with a fresh approach; showcasing a cast of D/deaf and disabled performers, whilst providing access for visually impaired and D/deaf audiences.

It its simplest form, Tommy is the tale of a deaf-blind boy who demonstrates a unique talent at pinball. His ability captures the imagination of a huge following, elevating Tommy as a spiritual yet reluctant cult leader. Evoking overtones of Christianity and parodying celebrity, Tommy is a psychedelic rollercoaster ride of prog rock numbers, rearranged with a 14-piece band and presented with high production values.

The Who’s music very much leads the show. Tommy is sung-through with little dramatic interlude, relying on Pete Townshend’s lyrics to drive forward a basic narrative. Kerry Michael’s direction and Mark Smith’s dynamic choreography ensure the story is clarified with movement and mime, whilst vivid projections and inter-titles further buttress a sense of space and time. What little drama there is is underscored, giving the production a sense of urgency and momentum. Don’t expect flowery dialogue – in fact, don’t expect much dialogue at all – as this is a rock opera in its purest sense.

Structurally, it’s clear that Tommy was conceived primarily as an album. There are few opportunities for audiences to applaud as numbers impatiently segue directly into one another – an inescapable hallmark of progressive rock. As such, Tommy’s audience may feel a little excluded from the ride compared to contemporary musicals, which generally punctuate each number with a bold exclamation. And a pause. For applause.

There are exceptions to the rule, however. The Acid Queen, portrayed by stage legend Peter Straker, provides a glass-shattering vocal, including one track exclusive to this production. Darkly comedic and deliciously ambiguous, the Acid Queen is a gloriously camp creation and is justifiably expanded to the benefit of the show. Straker’s show-stopping turn raises the roof, securing an indelible impression and is the undisputed highlight.

William Grint is Tommy in a touching performance, evoking a wide range of ages as boy matures into man. Grint captures the toddler Tommy particularly well, whilst his adolescent phase rightly issues Christ-like undertones. In a perfect partnership, Matthew Jacobs-Morgan provides Tommy’s vocals and inner voice, shining through the See Me, Feel Me theme. A similar collaboration is forged in the presentation of Tommy’s mother, realised in a tender performance by Donna Mullings with striking vocals from Shekinah McFarlane.

Visually, Tommy is a busy production. Focal points range from artists signing whilst singing, in addition to a caption display providing subtitles. Coupled with song, dance, graphic projections and an abundance of lighting effects, Tommy invites its audiences to absorb a multitude of complex stimuli.

Technically the whole production aims for a stadium feel and it succeeds in volume and scope. Neil Irish’s design also injects added value in small details such as a Sixties’ BBC TV camera, providing a huge projected fold-back for a live Top of the Pops feel. An illuminated pinball machine and some dozen chairs – all glowing independently – also secure a psychedelic palette. Bursting with colour, vibrancy and sound, Tommy capitalises on the thrust-stage of the Quarry Theatre and it succeeds in capturing a bravura, dynamic concert scale.

Whilst Pinball Wizard is arguably the most famous hit and the bombastic centrepiece of the show, there’s a bounty of other memorable numbers. Peter Straker’s Acid Queen is outrageous in its audacity, whilst Listening to You is boldly arranged with blasting brass and a large vocal ensemble. All the numbers offer an orchestral scale and a dynamic arrangement, performed by a superbly percussive band, drives forward the production to a memorable, closing crescendo.

Tommy is an ambitious, innovative and striking rock opera. Whilst the story is completely off the wall, the ingenuity in this version’s staging, in addition to a multi-talented cast, breathes new life and soul into a forty-year-old concept. Bold and boisterous, Tommy is an energetic attack on the senses and provides an edgy, accessible and memorable experience worthy of its long-cherished reputation.