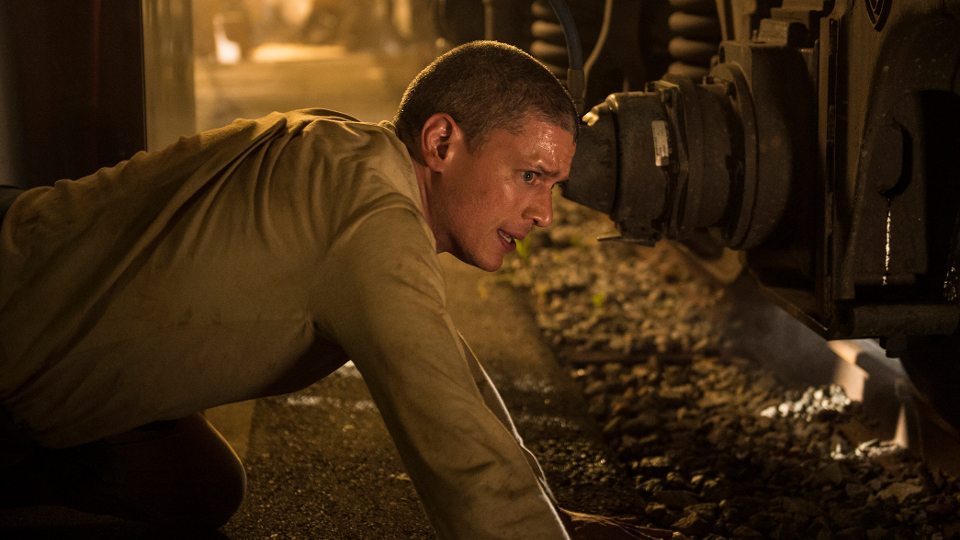 On the latest episode of Prison Break, Michael Schofield (Wentworth Miller), Whip (Augustus Prew) and Ja (Rick Yune) made their last attempt to break from Ogygia

If you want to avoid spoilers for Prison Break season 5, we suggest you stop reading now. If you don’t mind then please keep reading for a recap of episode 4 and a preview of episode 5.

The episode began with Sheba (Inbar Lavi) in hospital with Linc (Dominic Purcell) at her side. She was recovering from the beating from Cyclops (Amin El Gamal). He told her Michael hadn’t made it out.

C-Note (Rockmond Dunbar) arrived to tell Linc they needed to get out of Yemen before ISIS cut off the airport. Linc refused to leave Michael behind and told C-Note to leave with Sheba. Sheba’s dad offered Linc a reward for saving his daughter. He traded his car for a full pardon for Michael.

In Ogygia, Michael, Whip, Ja and terrorist leader Abu Ramal (Numan Acar) had been put into solitary confinement for their attempted escape. They were able to talk to each other through the small hatch on each of their doors. They needed to find a way out before ISIS took over the city.

The guards began to get nervous as ISIS approached. Some of them began to leave the prison to escape the city. Cross (T.J. Ramini) had an idea to capture Ramal to bargain with the ISIS fighters when they arrived.

Back in the cells, Michael had a plan. When he was last in solitary he had left something in his cell behind a loose brick marked with an S. He asked Whip and Ja to check their cells but they couldn’t find it. Ramal started laughing because the S was in his cell. He wasn’t in the mood for helping as they had tried to abandon him on the previous escape attempt.

When Linc arrived at Ogygia many of the guards ran out to escape. One of the main guards, Mustapha (Bobby Naderi) unlocked the main gate to left himself out. He then locked it behind himself to keep everyone else in the prison. He ran past Linc on his way out. When Linc got inside they told him to go after Mustapha to get the key.

Linc followed Mustapha and saw him get killed by an ISIS patrol. He had the boy he gave Tic Tac’s too to tell the ISIS patrol that he had seen an American. While they looked the boy grabbed the keys from Mustapha and took them to Linc. He thanked him and gave him more Tic Tacs before running back to Ogygia.

Inside Ogygia, Cross took leadership over the other prisoners. He organised them to try and get to Ramal and Michael. This was enough for Ramal to agree to help Michael. Behind the S stone, Ramal found a long string that Michael had made which was attached to a bent spoon.

Michael had him hook it over a water pipe that was high up in Ramal’s cell. He then had him pull it down and attach the spoon to the end. Doing so created a tool that could pull the hinge pins from Michael’s cell door. It worked and Michael was freed from his cell.

He then rushed to get the keys to free Whip and Ja. Against his better judgment he freed Ramal as well in exchange for his word to get them safe passage out of the country. They fled just as Cross and the other prisoners broke into the solitary wing.

Michael had Ramal make a phone call to arrange safe passage for them. While they waited Ja grabbed himself some drugs from the pharmacy. Cross then burst in but they had made their escape back to the cells.

There they hid from Cross and came across Sid (Kunal Sharma). As Cross searched for Ramal and Michael, Sid grabbed a sharp object and killed Cross. They then escaped the prison as Linc arrived with the keys. He let all the prisoners free as he saw Michael jump over one of the walls.

Now outside, Michael and the rest made a run for it. They noticed Ja was missing so turned back and found him grabbing some fruit to eat. Michael turned on him and pushed him to the floor telling him he was out of the group. Unseen to Ramal, Michael had passed a note to Ja telling him to get to the guns at the auto shop.

Ja made it to the shop and found the guns hidden under a workbench as per Michael’s instructions. Outside, Ramal’s men arrived and he ordered them to put Michael and the others down. Ramal made Michael kneel and held a knife to his throat while one of his men filmed it.

Suddenly Linc appeared and took control of a machine gun on the back of one of their vehicles. Whip decided to distract Ramal and then managed to stab him. This was the cue Linc needed to start shooting and he killed the rest of the men. The group fled as more ISIS soldiers arrived.

Elsewhere in the episode, T-Bag (Robert Knepper) tracked down Kellerman (Paul Adelstein) who he believed to be Poseidon. He called Sara (Sara Wayne Callies) to tell her he had found him.

T-Bag followed Kellerman to his house and broke in, holding him at gunpoint. He told him that he wanted answers and a kale shake to see what all the fuss was about. He was upset that Kellerman exonerated all of his fellow inmates but not him.

T-Bag accused him of being Poseidon which made Kellerman laugh. He denied it and said he was almost a myth, a rogue CIA operative that was untouchable. Kellerman speculated that Poseidon was using Michael to extract Ramal to fight Iran and Russia.

Suddenly Kellerman was shot through the window. A&W (Marina Benedict) and Van Gogh (Steve Mouzakis) had arrived and they also shot T-Bag. He left Kellerman and barricaded himself in the basement before calling 911 for help. Upstairs Van Gogh put another bullet into Kellerman.

The assassin’s went down to the basement and found that T-Bag had escaped through a window. They left to the sound of approaching police sirens as T-Bag watched from the safety of his car. He followed them to a meeting where they spoke with Jacob, Sara’s new husband.

At the end of the episode, there was an emotional reunion between Linc and Michael. They then saw footage of them killing Ramal on a TV. The entire ISIS army had declared war on them for killing their leader.

Check out the Prison Break 5×05 trailer below:

Lincoln becomes frustrated as he tries to understand what really happened to Michael. C-Note has a new escape plan, but fears it will not be executed quickly enough, as Cyclops is trailing closely behind. Meanwhile, Sara struggles with the idea that Michael may be alive.

UK viewers can watch the next episode of Prison Break season 5 on FOX UK on Mondays at 9pm. US viewers are a week ahead and can tune in to FOX on Tuesdays at 9pm ET. Preview the episode with our gallery:

In this article:FOX, Prison Break