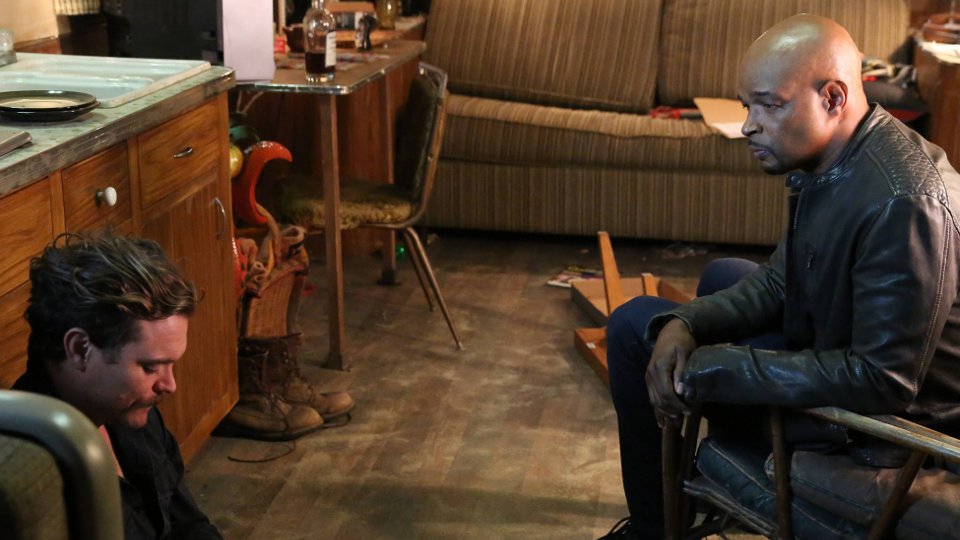 At the start of the episode, a group of thieves burst into a casino on motorbikes. They shot the place up and escaped with large amounts of cash. A small part of the heist was witnessed by one of the casino waitresses.

At his trailer, Riggs entertained himself shooting beer bottles on the roof. The stray dog he found last episode was now living with him and helped itself to food out of his fridge. Checking the mail he found a cheque for $147,000 for the sale of his old home.

At the Murtaugh household, Trish (Keesha Sharp) made smoothies. She suggested to Murtaugh a holiday to climb Kilimanjaro but he wasn’t keen on the idea. He said he would be happier with a beach holiday.

The pair were called to investigate the casino heist. They spoke to the waitress who said she saw a snake design on one of the bikes. Riggs decided to take a shot at the roulette wheel and used his cheque as his wager. Murtaugh was horrified and grabbed it off the table. They stuck around to see where the ball landed and it was exactly where Riggs bet. He wasn’t all that bothered and told Murtaugh he cost him a lot of money.

Back at the precinct, Bailey (Michelle Mitchenor) and Cruz (Richard Cabral) took a look over the casino CCTV. They noticed that the waitress left the main area before the heist so probably didn’t see anything at all.

A man paid a visit to the waitress claiming to be dealing with the insurance claim. She let him in and he pulled a gun out and shot her in the head. Riggs and Murtaugh arrived on the scene and found that the bullet had fractured her skull but she was still alive. Riggs spotted someone in the closet and inside found a boy called Ethan, the eight year old son of the waitress.

At the hospital the waitress went in for surgery. That left Ethan as the only witness. Murtaugh tried to talk with Ethan but scared him. Cahill (Jordana Brewster) offered to take him to the police station but he said he would prefer to go with Riggs. He was excited to find out that Riggs has flashing lights and a siren on his car.

Later, Ethan opened up to Riggs a bit and they made a promise not to tell lies to each other. Ethan said he would give some information for each cheese puff that Riggs could catch in his mouth. Being a big kid himself, it turns out that Riggs is a cheese puff catching master and caught every last one. Ethan told him about the snake design on the bike.

Murtaugh and Bailey paid a visit to a custom bike shop. Murtaugh went on about his love of the TV show CHiPs. He was disappointed when Bailey and the bike shop owner both said he wasn’t a bike guy. The owner explained that the snake design is one he puts on all the bikes he makes.

Cahill suggested that Ethan go into temporary foster care but Ethan refused. He asked if he could stay with an aunt instead so she agreed that they would ask. On the way to his aunt’s house, Murtaugh told him about CHiPs but Ethan was bored. They spoke to the aunt but she was acting strange and refused to take Ethan.

Murtaugh had a look around and Riggs told Ethan to stay in the car. Murtaugh spotted a casino chip on the floor by the front door. As he went to pick it up a shotgun blast burst through the door where his head would have been. Riggs joined in the shootout and they arrested the shotgun guy. Riggs upset Ethan afterwards by shouting at him for leaving the car.

Back at the precinct, Murtaugh lost his temper with the suspect. Captain Avery (Kevin Rahm) had to intervene to stop him from causing the man harm. They had Ethan look at a line-up but he couldn’t pick out the man who shot his mom. He later admitted that he only heard the man’s voice and didn’t actually see him.

With everyone telling Murtaugh he wasn’t a bike guy it made him really want one. He went back to the bike shop and treated himself to one. While there he spotted a photo of the casino owner.

With no one to take Ethan in, Riggs took him back to his trailer. He spent the night there and really bonded with Riggs. The next day Cahill explained that he had to go to foster care so Riggs agreed to take him.

Meanwhile, Bailey discovered a man that connected the casino owner and the bike shop. He was the one who shot the waitress and was next sent to kill Ethan. At the foster place, Ethan was upset at Riggs and ran off. He then heard the voice of the shooter and got scared. He managed to get outside and hide in the back of Riggs’ truck.

When Riggs got home he discovered Ethan and listened to him explain the shooter was at the foster home. Avery called Riggs to tell him Murtaugh was on the way. Suddenly the biker gang appeared. Riggs emptied the fridge and put Ethan inside, telling him to count to 100 while listening to an iPod.

Riggs put up a fight and took them all out. He carried Ethan to his truck and told him to close his eyes to avoid seeing the dead attackers. Riggs didn’t realise the shooter was still alive but Murtaugh arrived on his shiny new bike and finished him off.

The waitress survived her surgery and thanked Riggs for looking after him. Riggs promised to visit Ethan in the future. Later Riggs gave his cheque to Cahill and asked that she give it to the waitress.

At the end of the episode, Murtaugh took Trish for a ride on his motorbike. He had to call RJ to pick them up when he ran out of gas.

Watch the trailer for Lethal Weapon 1×09 Jingle Bell Glock below:

The whole precinct’s holiday celebrations are cut short when they’re called to examine a ruthless homicide linked to Eddie Flores (guest star Raul Casso), the deranged nephew of a notable drug lord who has a previous history with Riggs. The holiday season weighs heavily on Riggs, who flashes back to past Christmases with his former wife, Miranda. Murtaugh is also a little preoccupied with his neighbor’s obnoxious holiday decorations.