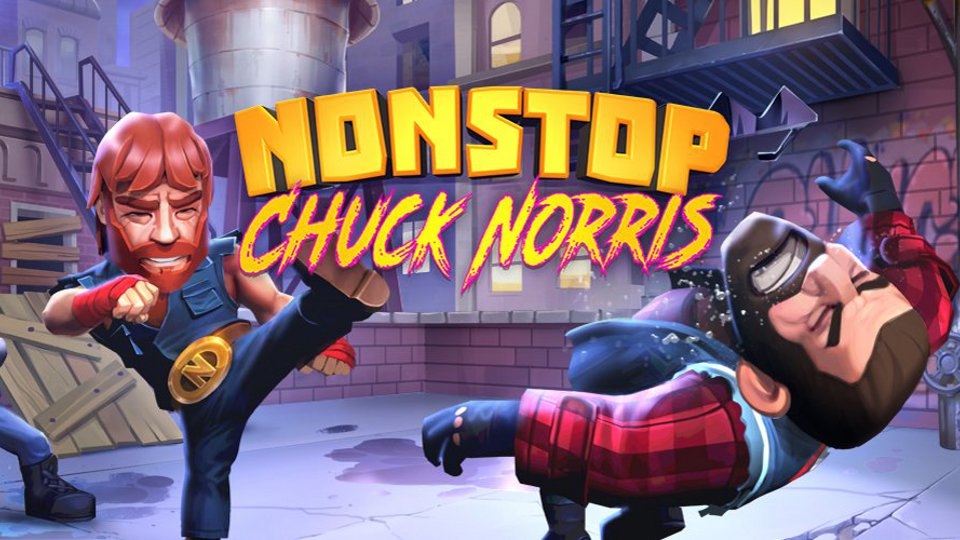 Nonstop Chuck Norris is an auto-runner that lets you help the legendary Chuck Norris battle infinite enemies. If you played last year’s Nonstop Knight, also by flaregames, then you’re in for a very familiar experience.

The game is essentially a simplistic isometric action-RPG that pretty much plays itself. That’s because no one can control Chuck Norris except the man himself. Instead you play as a sidekick of sorts that spectates the action and gets to influence Chuck.

When you fire up the game Chuck gets to work laying the smack down on anything that breathes. He runs through levels kicking and punching everything he finds until it is dead. Chuck himself has a health bar but he cannot die, instead he very occasionally gets knocked down and then he jumps up and gets right back into the action.

Watch the Nonstop Chuck Norris (iOS/Android) – My Game, My Rules trailer below:

As he destroys everything in his path, Chuck earns XP points and coins. Each time he defeats someone the screen explodes in coins. XP earned eventually lets him level up to become even more powerful. Depending on his level various skill trees open up and you can pick three active moves.

These include a variety of kicks, push-ups, a jumping ground pound and even Chuck’s shadow. Each tree has more powerful versions of the moves which unlock the higher Chuck levels. As he keeps fighting you can trigger the active moves to unleash more damage. This allows Chuck to power through enemies and earn coins faster. Each move has it’s own cooldown timer to stop you spamming them.

Every few levels there is a boss for Chuck to defeat. The game lets you know how prepared Chuck is for the fight and you can trigger the encounter once you feel confident Chuck will win. There’s little extra skill involved in the boss encounters unless you trigger them before Chuck is fully prepared.

In addition to choosing which special moves Chuck uses you also manage his inventory. To Chuck Norris any item is a deadly weapon and the game has all kinds of objects for him to use. There’s everything you’d expect like baseball bats, guns and chainsaws to more obscure items like a ladder, fold-up chair or even a selfie stick.

Something I found rather funny is that Chuck Norris doesn’t need bullets to make a sniper rifle deadly as he’ll just hold the barrel and bludgeon enemies to death with it. Same with a chainsaw, Chuck holds the dangerous end and pounds his enemies with the motor.

In addition to weapon management you can also choose which outfits he wears for defense. There are also hats which influence his move damage. All items can be levelled up by spending coins on them. As he progresses through the stages enemies get tougher so you need to constantly upgrade his gear. As items get higher so does the cost to improve them so you can find yourself having to wait for more coins.

Things start to get tougher towards stage 50 requiring Chuck to spend a lot more time fighting to earn enough coins to upgrade. The more stages you beat, the better the rewards will be. When you’ve had enough, any time after stage 20, you can have Chuck punch open a rift to a different universe and everything starts again. In each universe you can unlock permanent upgrades to make Chuck more lethal.

To try and keep things interesting the game has three Missions that refresh every 8 hours. These are simple tasks like defeat x number of enemies, complete x number of stages or use a particular move x number of times. There are also a large number of Achievements which track all kinds of statistics. These include how many items you’ve discovered, how many coins collected, how many enemies have been defeated and so on.

You can also unlock pets to fight alongside Chuck. Other features include a challenge mode and online leaderboards but these weren’t active in the build I played. For players wanting to progress faster there are optional microtransactions allowing you to buy in-game currency or gear for real cash.

Despite not really having much control over the game it’s a strangely addictive experience. I found it rather relaxing to just sit back and watch Chuck go nuts. Whenever you are managing his gear or in the in-game menu’s Chuck just keeps on fighting. Should you leave the game to do something else Chuck will progress while you’re gone. Coming back after some time you’ll be told how many stages his completed, the number of enemies he’s defeated and rewarded with a large stack of coins.

Nonstop Chuck Norris is a compulsive experience and a perfect choice for the more casual gamer. It always feels like you’re making progress, even when you’re not actively playing. It does get repetitive fast but for short sessions it’s a lot of fun. It’s also ideal for when you want to play something but can’t give it your full attention.

Nonstop Chuck Norris is free-to-play and can be downloaded via the App Store for iOS and Google Play for Android.