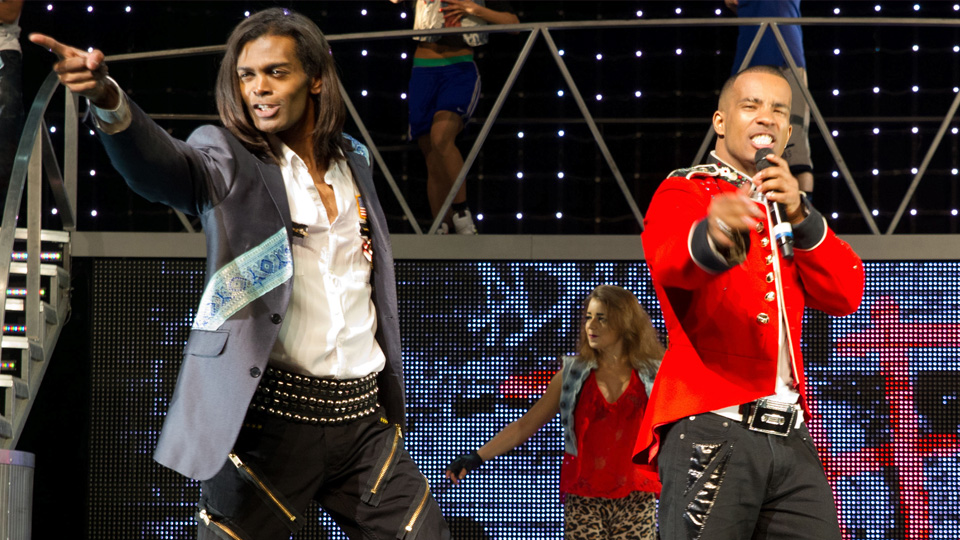 Transferring from the West End as part of a national tour, Thriller Live – the concert which celebrates the music and career of Michael Jackson – arrives at Leeds Grand Theatre for one week only.

Crowned the King of Pop, Michael Jackson shot to fame as the teenage frontman of The Jackson 5, scoring hits with ABC and Rockin’ Robin in the 1970s. He later went solo with his disco album Off The Wall, propelling himself to superstardom throughout the 1980s with record-breaking albums Thriller and Bad. By the 1990s the hits became few and far between, with highlights including Black or White and the notoriously bizarre Earth Song, which Jarvis Cocker infamously disrupted at the 1996 Brit Awards.

Thriller Live celebrates the star’s varied career in a gala concert which has all the flavour of a primetime television special. X Factor-style narration brackets energetic dance routines, staged before a matrix of vibrant video walls and explosive glitter canons. Thankfully the music is the commanding, standout feature; Andy Jeffcoat’s musical direction is flawless, offering a tack-sharp studio quality throughout. The arrangement is authentic to Jackson’s records, coupled with the vitality and naturalism of live performance. In short, the six-piece band sounds expansive, showcasing Jackson’s musical catalogue with a genuine rock concert bravura.

Lead vocalist and resident director Britt Quentin delivers a superlative emulation of Jackson’s famously acute and penetrating vocal range, anchoring the concert with co-stars Shaquille Hemmans and Rory Taylor, who are equally arresting with perfect harmonies and commanding solos. Pocket-sized Victoria Pasion offers a vocal acuity and songbird-like range which tops the roof, mirroring the youthful tones of Jackson’s classic teen hits whilst lending a sensitive authenticity to the Motown numbers of old.

The man who wholly channels the iconography of Michael Jackson is dancer Sean Christopher. In a number of complex dance routines, the image of the King of Pop commands the stage and is almost imperceptible from the original act – particularly during a rendition of Smooth Criminal, describing sharply honed moves lifted straight from the music video. Fans will undoubtedly be sated with effortless crotch-grabbing, spinning, leaning and moonwalking.

A show titled Thriller Live immediately demands high expectations. Named after the best-selling album of all time, with the most expensive video ever produced, Jackson’s Thriller is an almost insurmountable act to honour. Since its transfer from the West End, inevitable shavings have been made to Thriller Live’s touring version; the teenage Jackson is represented by a prerecorded video, augmented with a few live dancers. The 1970s period also feels cheaply costumed, appearing as a camp parody instead of a kitsch celebration of the sunburst Motown style.

Thankfully the synthetic 1980s are better served; Thriller, the great title number, is held off to the finale and recaptures much of the essence of the period with nostalgic accuracy. The makeup feels a little hurried and cosplay in parts and is not a patch on Rick Baker’s incredible work in the video, but within the constraints of live theatre with a cast of approximately 12 performers, the rendition evokes the memory of the original and succeeds as a very worthy and rewarding tribute.

Earth Song, a lamentable and off-key outing for Jackson in Britain, meets equal absurdity in this production, though thankfully we are spared the manipulative image of stage school kids in rags, or Jackson presenting himself as Jesus Christ. Curious images of polar bears, trees, Earth and later projections of Lennon, JFK and Martin Luther King, punctuate the production and are, at least, an authentic reflection of the egotistical imagery which Jackson would associate with his performances. Irresistibly daft, this off the wall nonsense just adds more weight to the wave of nostalgia.

Thriller Live is a brave, bold attempt to recapture the fire of Jackson’s talent and succeeds in igniting some sparkle. The show is an energetic and entertaining tribute and for the price of a ticket offers high production values for a sit-down concert. A jukebox extravaganza pitched at the X Factor audience, the show offers a whistlestop tour of Michael Jackson’s career and is a fun entry into a defining era of pop, introducing a new generation to the star’s record-breaking catalogue. Satisfying and occasionally spectacular, Thriller Live is a buoyant, blithe and boisterous greatest hits compilation and will surprise even the most discerning aficionados.