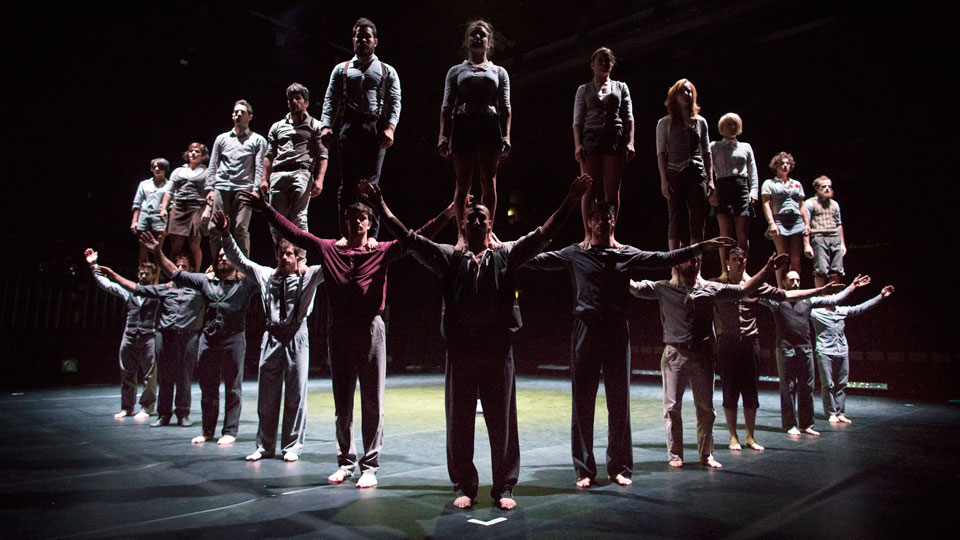 Compagnie XY bounded into London’s Roundhouse last night, following a seven year absence, to show off their jaw-dropping acrobatics and to convey a topical message. A commentary on unity, It’s Not Yet Midnight… is the third production from the French contemporary circus collective.

Sequences packed with exciting leaps and vaults bounced off my eyeballs until they collapsed into an exhausted heap, only to come alive again and explode into yet more action a short time later. It was visual popping candy: thrilling, exciting and tremendously fun.

Launching with a hectic, high-energy fight scene, over 20 performers kicked, punched, and tumbled across the stage. This was a striking, almost cinematic, display: haunting and savage choreography, combining brute force with the elegance of a martial arts battle. At times, my vision barely kept up with the scenes on stage – a recurring challenge throughout the evening.

The pace of the show quickened and slowed throughout its 60 minute duration, reflecting the complexities of how people learn to accept one another (not always a quick, smooth process!). Slow, graceful interludes were sandwiched between frenetic stunts and lindy-hopping. Pulsating music would spur on acrobats forming towers and assembling into tiers like Stickle Bricks, rising up higher and higher. Silence would suddenly ensue, leaving the acrobats swaying in the air and the audience stuck with the sound of our own accelerated breathing.

I counted five instances where stunts appeared to go wrong, holding my breath each time as my heart leapt into my mouth. The narrative emphasizes the importance of working together so it could be that these incidents were deliberate. They were definitely nerve-wracking – I was on the edge of my seat!

Adding to both the narrative and our sense of awe was the set: a simple stage. It allowed the performers – dressed as ordinary Joe Bloggs – to stand out while serving as a reminder that you don’t need material things to appeal to others and forge bonds with new people. The show’s topical theme, promoting acceptance and inclusiveness, is perfectly timed for Brexit and President Trump, although that could wear thin with people looking to the arts for escapism.

Fortunately, It’s Not Yet Midnight… is more endearing than evangelical. The audience chuckled and cheered throughout the show, encouraged by the troupe’s playfulness – including a great scene where they all started giggling and deliberately lost their composure.

From watching a circle of performers practically Greek Dancing across the shoulders of those holding them aloft in the air, to witnessing a female acrobat being propelled onto a tower of three men (and effortlessly striking a pose at the top of this 18 foot tall human chain), I found more than enough escapism and adventure.
It’s Not Yet Midnight… is a stylish and exhilarating spectacle which soars to dizzy heights. Again and again.

Advertisement. Scroll to continue reading.
In this article:Compagnie XY, It’s Not Yet Midnight