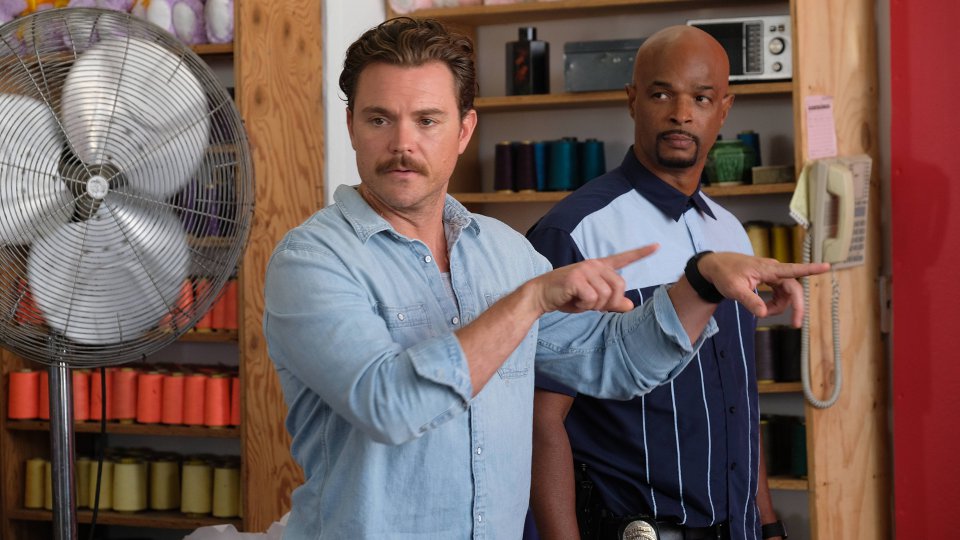 On the latest episode of Lethal Weapon, Riggs (Clayne Crawford) and Murtaugh (Damon Wayans) investigated the death of a model.

At the start of the episode, Riggs awoke in his trailer to the sound of Duran Duran. Outside some guys from Amsterdam had parked up their camper van nearby on the beach. They were sat playing music and singing so Riggs asked them to move along. When they refused he broke their amp.

At the Murtaugh residence, they were getting a brand new 4K TV installed. It was some top of the line model that integrated with all their other devices. As Murtaugh beamed at his new gadget the tech guy setting it up was demonstrating the features.

He pulled up a slideshow of their pictures which included some racy ones of Murtaugh’s daughter Riana (Chandler Kinney) in lingerie. Murtaugh lost it when he found out that she had texted the pictures to her new boyfriend. Riana didn’t see a big deal and stormed off but RJ (Dante Brown) had memorised the number. Trish (Keesha Sharp) agreed to talk to her.

Riggs and Murtaugh were called to the morgue over the death of a model found on the hood of a Ferrari. They were able to track the vehicle back to a specific dealership. Before heading out Murtaugh asked Bailey (Michelle Mitchenor) to look into the number that RJ gave him.

At the dealership the owner refused to give up who had bought the car that killed the girl. Riggs asked to test drive one of his supercars and took him on a dangerously fast lap of the city. Terrified he finally gave up the name Dylan Ashworth. When they returned Murtaugh had the same information from asking a junior staff member.

Back at the precinct, Captain Avery (Kevin Rahm) warned Riggs off going after the Ashworths. Not one to listen he and Murtaugh crashed a party at Dylan’s mansion. They split up and Murtaugh soon had a run in with Dylan who wasn’t bothered by being questioned. He ever went to take some cocaine in from of him so Murtaugh arrested him. Meanwhile, Riggs was distracted when he thought he saw a girl named Rachel, she was the old roommate of his dead wife Miranda.

Back home Riggs found himself disturbed again by his new Dutch neighbours. This time they were playing an acoustic guitar. Riggs held out his hand and they gave him the instrument thinking he was going to play something. Instead he smashed it to pieces.

At the precinct, Dylan said he had nothing to do with the dead girl. His father Henry soon arrived with the family lawyer and Captain Avery apologised and let Dylan go. Avery told Murtaugh they needed better evidence first.

Riggs paid a visit to Rachel and she initially denied being at the party. They spoke about Miranda and Riggs explained about the dead girl. Rachel confessed that she was at the party after an invite from Julian who hosts the parties.

Riggs went after Julian, pulled his car over and kicked his wing mirror off. Julian claimed to know nothing of the dead girl.

Bailey passed on the details of Riana’s boyfriend to Murtaugh after tracing the phone number. He was a 19 year old surfing instructor with prior pickpocketing offenses. She also showed Murtaugh his Facebook page which had used Riana’s racy photo for his cover picture. They paid him a visit and had him use his pickpocketing skills to steal Julian’s logbook.

The book was written in code but Riggs worked out that Rachel was one of the girls mentioned. She explained that Julian had coded names for each of his girls based on things the girls reminded him of. She also provided an alibi for Dylan as she was with him the entire night the girl was killed. After Riggs left, Julian arrived and insisted Rachel go to a sex party with him.

At the party Rachel was given to Henry to use against her will. She managed to escape but Henry chased her down in his SUV. Meanwhile, Riggs and Murtaugh were on the scene and Riggs went after her. He arrived just in time as Henry was going to drive over Rachel. He shot out the back tyres and the vehicle flipped over her. It exploded as Riggs walked her away.

Elsewhere in the episode, Riana’s boyfriend broke up with her after the visit from her Dad. Murtaugh apologised to her for reacting the way he did. Trish was annoyed until Murtagh told her what the boyfriend had said and she decided to pay him a visit herself.

At the end of the episode, Riggs was awoken again. This time though it was Murtaugh having the neighbours towed away. They then sat together and had a beer in Miranda’s favourite spot.

Watch the trailer for Lethal Weapon 1×07 Fashion Police below:

As Riggs and Murtaugh examine the murder of one of L.A.’s fashion expeditors, they follow a trail of evidence that leads them to an ongoing and exceptionally dangerous underground investigation led by the Drug Enforcement Administration. In the meantime, Trish and the kids are off visiting colleges, leaving Murtaugh to a ‘bender’ of his own, while Riggs has trouble sleeping through the night due to his all-too-real dreams of Miranda.