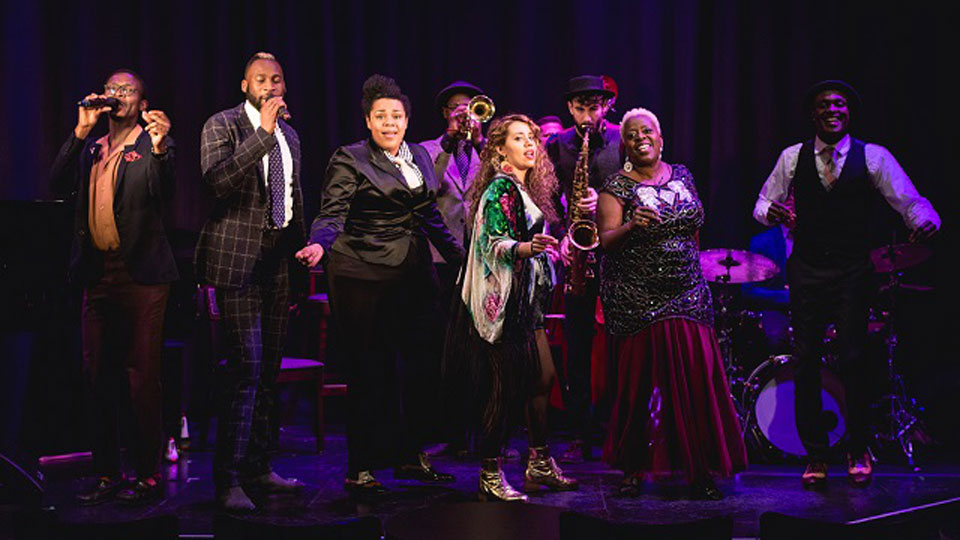 Tonight, in the intimate basement of The Other Palace Theatre, a speakeasy will come alive with the spirit of Fats Waller. If you have any sense, you’ll get yourself down there to witness its coming because it won’t be sticking around for too long. This Joint is Jumpin’ celebrates and honours the great jazz icon through dance, storytelling and, of course, music. Produced by Hoagy B. Carmichael, it’s a toe-tappingly good show – the kind you want to see again and again.

By the time our host, Sammy Slyde (charismatic comedian, Desiree Burch) announced, “You like music? You like drinking? You will dig this!” I was already convinced. Burch made the audience feel like family; it was one big party, only we got to sit back, drink and enjoy the heady vocals of Broadway star Lillias White, mixed with the smooth, honey-and-molasses tones of Michael Mwenso and Vuyo Sostache.

White skipped effortlessly through the music register, raising the roof on several songs before dropping to a mournful lamentation for Black and Blue – the most evocative performance of the night. The guys added a soulful R&B twist to classics including Squeeze Me, Sweet Thing, Truckin’ and the title track. I detected not only Waller’s influence but also old and new singers ranging from John Legend and The Weekend to D’Angelo and Stevie Wonder.

There were 17 songs in total, played with passion and verve by The Shakes. The musical quintet injected electricity and humour, encouraged to sometimes steal the show rather than act like a backing band. Ruben Fox, playing tenor sax, and Mark Kavuma, with the trumpet, made their notes bend, jump and jive, over the steady, hypnotic sound of Kyle Poole on drums and bassist Dion Kerr IV. Mathis Picard’s fingers danced like Fred Astaire on the keys of the piano and it’s worth taking seats to the side of the instrument for this sight alone.

Perched on a back-row stool for the duration of the evening, my feet tapped away like they were battery-powered. My shoulders bopped relentlessly and my head swayed non-stop; a body possessed by velvet melodies and luscious vocals, cocooned in a state of appreciation and pleasure.

Surprisingly, This Joint is Jumpin’ isn’t a traditional revue: there’s no storyline or cohesion between anything unfolding on stage. We learn little about Fats Waller and his place in history; that’s not the focus of the production. Director Patrice Miller has recreated a night at Ronnie Scotts – that uplifting feeling of watching a live act and becoming intoxicated by the atmosphere as well as the music. The audience is encouraged to applaud, shout out and interact with the performers just as they would at a gig, only we’re unable to get up and dance.

That’s actually a good thing. You see, I desperately wanted to dance, particularly during the encore, but I would have been no match for tap-dancing choreographer Michela Marino Lerman. Her feet machine gunned the stage for most of the night and I can just about hop for 60 seconds! Performing alongside her was the elastic Joseph Wiggan; his footwork, dotted with lifts and tricks, drew gasps and cheers from the crowd. It was difficult to see all their fancy moves from my seat, but I heard the rhythmic tapping of their shoes, never missing a beat.

A lively, soul-satisfying event with exceptional singing, music and dancing, the Jazz era meets the 21st Century with a triumphant result. This Joint is Jumpin’ is one heck of a good time!

In this article:Desiree Burch and The Shakes, Joseph Wiggan, Lillias White, Michael Mwenso, Michela Marino Lerman, This Joint is Jumpin’