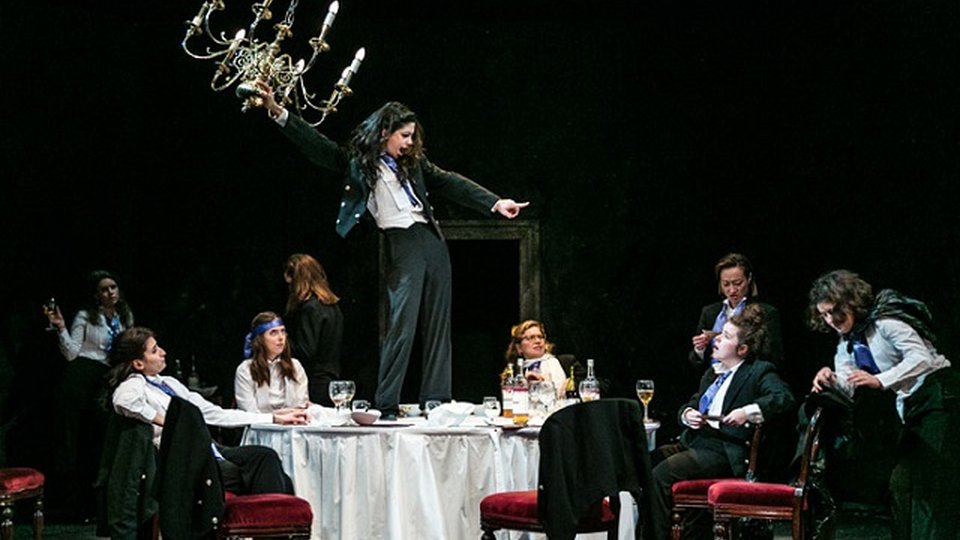 ‘Joining the old boys’ club’ takes on a new meaning in the return of Laura Wade’s critically acclaimed play, Posh. Reinvented with an all-female cast for a month-long run at The Pleasance Theatre, this tale about an Oxford University boys dining society – loosely based on the Bullingdon Club of David Cameron and Boris Johnson fame – is a powerful critique of privilege and entitlement.

The script is triumphantly scathing; sharpened with strobe lighting and music – an experience which draws you in, provokes thought, raises questions and, at times, takes your breath away. The set, with its revolving floor bearing the weight of egos as well as a dining table, creates the effect of watching the characters slowing spinning their own web of destruction. Their private dining room, situated in a gastropub, looks like a burnt out, blackened shell – an apocalyptic nod to the annihilation to come? Perhaps.

It was a mesmerising canvas, let down only by the decision to showcase an all-female cast without changing any pronouns. At times, I felt as if I were witnessing a painting being vandalised; someone scrawling over a modern masterpiece for the sake of being anarchistic. I doubt that’s what director Cressida Carré intended, but I couldn’t shake off the feeling that the cross-gender roles were merely a stunt.

Wade’s script is blatantly too commanding to be outshone by a gimmick, so why bother? I was still pondering this question at the end of the play. During my tube ride home, I imagined Boris Johnson impersonating Theresa May for a day. How ridiculous. And funny. If that was the point – to use a female cast to make more ridiculous the behaviour and attitudes of the self-serving, ruling elite – Posh packs a punch like Tyson Fury for much of the show. You just have to ignore the parts where it feels like you’re getting a slap from Brendan O’Carroll’s Mrs Brown. Either way, you’re not walking away unscathed.

Cross-gender debates aside (it’s too much like arguing about Marmite), the cast is a talented group of women who do well in their absurd male roles, particularly Verity Kirk and Alice Brittain. The two stood out in the 12-strong ensemble, with Kirk raising laughs as the hapless new recruit, Ed, and Brittain oozing entitlement as the disdainful Harry.

Polarising and provocative, Posh shows the hard edge of the upper crust, leaving most of us wishing they’d choke on it, as opposed to force-feeding us crumbs and expecting our gratitude.