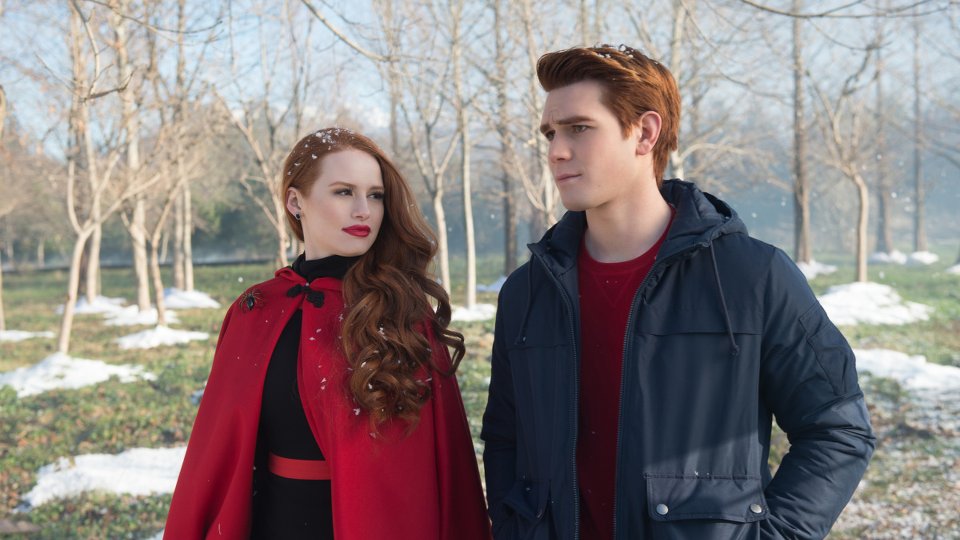 The Coopers and the Blossoms clashed as they tried to win Polly’s (Tiera Skovbye) trust on the latest episode of Riverdale.

Veronica (Camila Mendes) organised a baby shower for Polly, which was attended by the pregnant girl’s mother Alice (Madchen Amick) and Penelope Blossom (Nathalie Boltt). Alice and Penelope clashed over what was best for Polly and despite a heartfelt appeal from Betty (Lili Reinhart), Polly decided to live with the Blossoms.

That decision delivered a big blow as Alice had thrown Hal (Lochlyn Munro) out of the house after finding out that he’d tried to get Polly to have an abortion.

Meanwhile Fred (Luke Perry) was targeted by the Blossoms, who stole all of his workers. Archie (K.J. Apa) gathered his friends together to help his father and Moose (Cody Kearsley) was attacked by some thugs. Trying to find out who was behind the attack, Archie led his friends to a Serpents’ bar and discovered that Jughead’s (Cole Sprouse) father F.P. (Skeet Ulrich) was a Serpent.

F.P. gathered his men and offered to work for Fred and he took the opportunity to tell Hermione (Marisol Nichols) that it was her estranged husband who was targeting Fred.

Elsewhere in the episode F.P. was revealed to be using Joaquin (Rob Raco) to get close to Kevin (Casey Cott) and he gave him Jason’s jacket for safe-keeping after denying to Jughead that he’d been involved in the murder.

The next episode of the season is Chapter Nine: La Grande Illusion. Archie reluctantly agrees to escort Cheryl to her family’s official start of maple syrup tapping because he gets an offer that could help his future.

Tune in to The CW on Thursday at 9/8c in the US and Netflix on Friday in the UK to see the episode. Preview it with our gallery and the promo below: