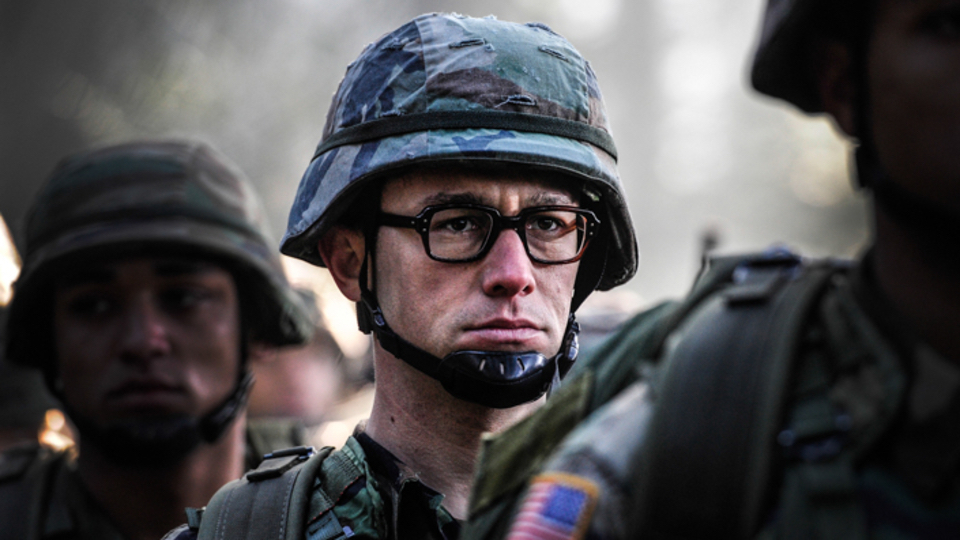 One of the most fascinating news stories of modern times, and a real black eye for the Obama administration, the NSA leaks by whistleblower Edward Snowden is just the sort of story that Oliver Stone excels at. A thrilling, politically charged, ripped-from-the-headlines biopic, about a man who knew too much, and his life-changing decision to share what he knew with the world.

The film opens in Hong Kong in 2013, with Snowden (Joseph Gordon-Levitt) meeting Guardian journalist Glenn Greenwald (Zachary Quinto) and documentary filmmaker Laura Poitras (Melissa Leo) to tell them what he knows. We then flashback a decade to Snowden as a Special Forces recruit. He is a conservative, patriotic, hail to the Chief, young republican, politically forged in the aftermath of 9/11. When a double leg-break ends his military career before it begins, he winds up taking his self taught computer skills to the CIA.

Stone intercuts the narrative between Snowden working for the CIA, and later the NSA, with the tense meetings with the journalists, hiding in a Hong Kong hotel room. His paranoia effectively portrayed through the visual of him logging onto his laptop underneath a blanket, so that no one can see him typing his passwords. Seeing how he goes from “America…FUCK YEAH!” to Public Enemy Number One, is one of the most fascinating elements of the film.

This emotional journey runs parallel to his relationship with liberal photographer Lindsay, an excellent Shailene Woodley. She is with him on all his assignments around the world – Switzerland, Japan, Hawaii – and their narrative helps to keep the story relatable. Make no mistake, when this film gets techy, it becomes almost impenetrable. It would be easy to zone out, but Woodley and Gordon-Levitt are terrific, and keep the focus on their love story.

This film will make you want to destroy everything electrical you own, and then drop off the grid. It is frightening stuff, and Stone never lets you forget the stakes of Snowden’s actions. His best-case scenario is life in jail. But rendition, torture, interrogation, and execution remain hanging over him. The sequence where Snowden copies the files, and then has to go through security to leave work is a stunning example of expertly crafted tension.

The film boasts an incredible cast – there are so many recognisable faces it is almost distracting – with Joseph Gordon-Levitt at it’s heart. The film lives and dies by his performance, and he nails it. His Snowden is a morally compromised, politically conflicted, flawed young man. It is a superbly balanced performance, and exactly what the film required. Elsewhere we have Rhys Ifans and Nic Cage, both having a whale of a time as his CIA mentors, chewing the scenery to pieces.

What holds the film back are the questions that Stone fails to ask about his subject. Knowing what he knows, and how the Intelligence community operates, why does he keep going back to work for them? After Geneva, why didn’t he leave it all behind? Is he addicted to the intel, or to the power that comes with knowing all this classified information? Is there a streak of self-interest in what he does?

Snowden is a functional thriller about a very politically relevant subject. For a more thorough examination of this story, be sure to seek out Laura Poitras’ Academy Award Winning documentary Citizenfour.