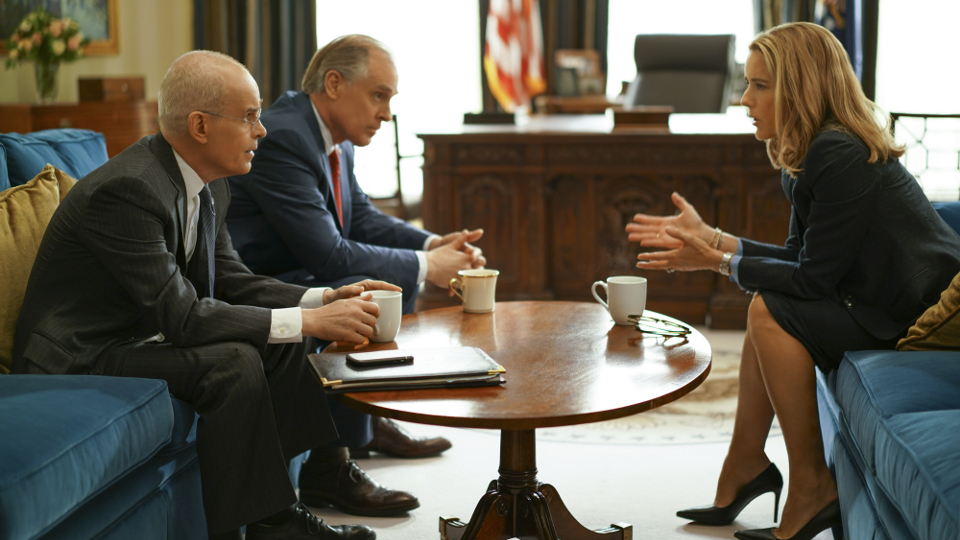 On the latest episode of Madam Secretary, Elizabeth (Téa Leoni) had to deal with the fallout after a terrorist detonated a bomb in an Illinois coffee shop.

At the White House, Daisy (Patina Miller) held a press conference and was bombarded with questions from the press who wanted to know more. One question asked about speechwriter Matt Mahoney (Geoffrey Arend), the reporter had uncovered that Matt was a member of the same Islamic church as the bomber. He had also recently donated money to the same church.

The press wouldn’t leave the story alone. Russell Jackson (Željko Ivanek) called Matt in for a meeting and ordered him to write a speech about the situation. Matt refused but Russell was furious as usual.

Nadine (Bebe Neuwirth) was worried about Matt so she asked Jay (Sebastian Arcelus) to take him out for after work drinks and a chat. Later as they guys were leaving the bar Matt was recognised by some drunks who started harassing him. Jay stepped in and then the pair ended up fighting with the men.

Back at work, with black eyes and cuts and bruises, Matt called a meeting and asked Elizabeth for permission to address the staff. He explained that he shouldn’t have to speak out because of the actions of on radical. Elizabeth understood and said no one would make him speak.

Elsewhere in the episode, Henry (Tim Daly) was asked by the FBI to try and help Dmitri (Chris Petrovski). Since being released by Russia, Dmitri had a new identity and was now living in Phoenix and working as a TV engineer. However he was struggling and feeling lost and isolated.

During a routine job he lost it and smashed up a TV. Henry went to his aid and posted bail. Dmitri begged Henry to take him back to Washington and give him a job working for Intelligence.

Henry tried his best but was unable to get him a job. What he was able to do with Elizabeth’s help was get Dmitri’s sister Talia into the country. She had been kept in the dark about his status and thought her brother dead. Dmitri was understandably delighted at the news and they had an emotional reunion.

At the end of the episode, after discovering that the Illinois bomber was funded by a man with ties to Saudi government, Elizabeth confronted the Saudi President at a summit in Canada. He was furious with her but she promised to not rest until justice was served.

The next episode is Tectonic Shift. After Venezuela’s president and his immediate successors are killed in a devastating earthquake, Elizabeth works to stop a power grab by the late president’s son, as well as secure the release of the international aid team he arrested. Also, Elizabeth’s brother, Will (Eric Stoltz), is torn between saving his marriage by settling down and taking a job at Walter Reed Medical Center or going to Venezuela to assist in the relief effort.