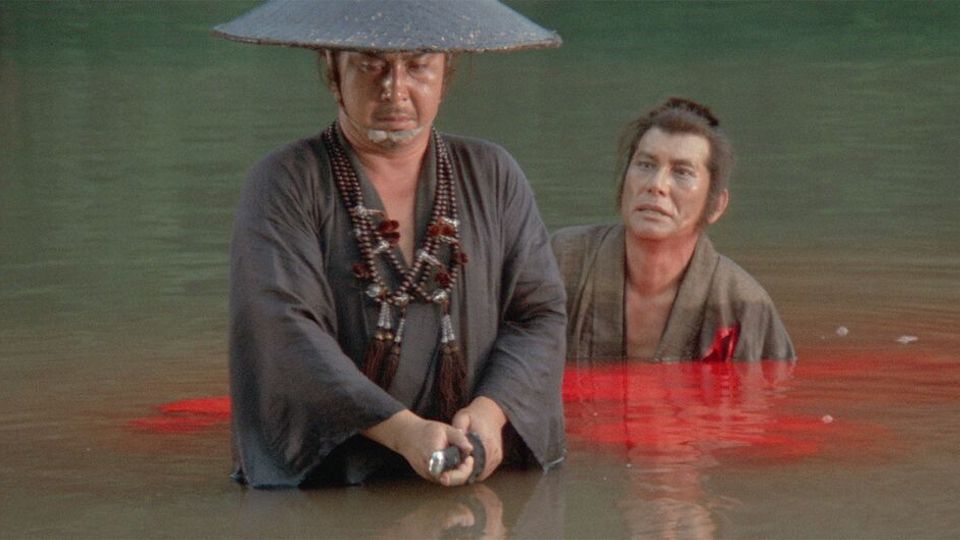 Based on the now legendary Manga by Kazuo Koike and Goseki Kojima, Lone Wolf and Cub is perhaps best known to Western audiences through the cult exploitation film Shogun Assassin. An English dubbed re-edit of Baby Cart at the River Styx – with elements of Sword of Vengeance also spliced into the finished product – Shogun Assassin toured the grindhouse circuit in America, and nearly found itself caught up in the Video Nasties scandal here in the UK. This plush re-issue from Criterion brings all original six films to blu-ray for the first time, and even includes Shogun Assassin in the supplementary features.

The saga begins with the harrowing execution of an infant lord, by the Shogun Assassin himself Itto Ogami (Tomisaburo Wakayama). The intro is leaden with exposition, setting up the politics, the rival clans, and various factions of the all-powerful Shogunate.

When we next meet Ogami, he is a sword for hire, wandering the countryside with his infant son in a baby cart. Flashbacks reveal the tragic murder of his wife by ninjas, and the elaborate plot to set him up as a traitor to the shogun, in order that a rival clan takes over his role as executioner. It is ridiculously complicated for such a simple story.

Each film in the saga, sees Ogami and his son Daigoro getting into various adventures – usually involving being hired to rid the world of some bad guys – whilst also furthering his quest for revenge against the evil Yagyu clan. Not as visually stunning as the samurai films of Kurosawa, or as noble and serious as the Samurai Trilogy by Hiroshi Inagaki, the Lone Wolf and Cub films offer a more visceral experience. Stylishly filmed, and bursting with colour, they look great in HD thanks to this new transfer – although there’s perhaps a little too much definition for some of the shonky makeup and fake facial hair.

The inventive action is, and always will be the main selling point for these films. The duels are exquisitely choreographed, and often hilarious in their over the top violence. The frame is frequently filled with lots of lovely bright fake blood, spurting, spraying, and splatting everywhere. The many incredible weapons and uses that Ogami makes of the baby cart is also an endless source of mirth. Likewise with the incredibly expressive face of Daigoro as all this carnage unfolds around him.

Tomisaburo Wakayama is no Toshiro Mifune, but he completely dominates these films with his brooding central performance as the vengeful ronin. An expert martial artist, and veteran of hundreds of film, his portrayal of Itto Ogami remains his signature role.

Lone Wolf and Cub is a cult classic, filled with beheadings, scalpings, dismembered limbs, gratuitous nudity, and more arterial spray than is anatomically possible. It is a pure comic book aesthetic, and it is easy to see how its popularity has endured. Look no further than Tarantino’s Kill Bill for an example of its influence. The Showdown at the House of Blue Leaves owes it a significant debt.

As previously mentioned, one of the special features in this box set is the 1980 presentation of Shogun Assassin, given the HD treatment as well. There’s also a new interview with Kazuo Koike, the writer of the original Manga series. The disc also includes a 2005 documentary about the making of the series, entitles Lame d’un pere, l’âme d’un sabre. Finally there is a new interview in which Sensei Yoshimitsu Katsuse discusses and demonstrates the real sword techniques that inspired the manga and the films.