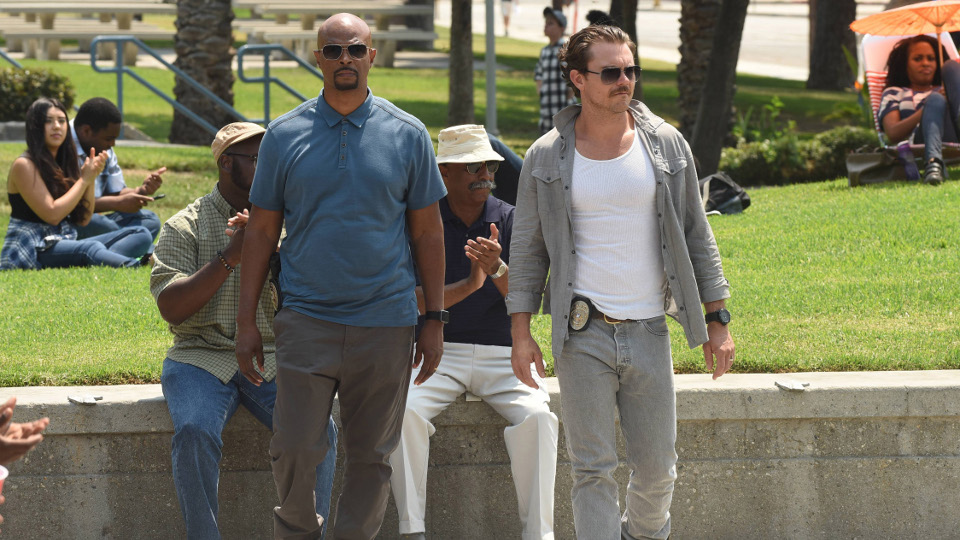 At the start of the episode, a weed dispensary was transporting their money via armoured truck. The truck was attacked and stolen along with all the money inside.

At home in his trailer, Riggs was relaxing with a smoke of his own while watching TV. He found himself upset when an advert showing happy couples came on. He dealt with it in a way that only Riggs can, he shot the TV.

Riggs and Murtaugh were called to investigate the crime scene and found that the truck driver survived the robbery. His name was Ned (Ted Levine) and Murtaugh knew him as Ned was his old training officer. Ned told them he worked for a company that handled the cash for dispensaries.

They paid a visit to the company financial manager and she said only herself and her clients would have known about the money being moved. A visit to two of her clients, Donnie and Lonnie, wasn’t very helpful but Riggs seemed to be enjoying their party.

Back at the precinct, Riggs spoke with Dr. Cahill (Jordana Brewster). He told her about the TV incident and she advised him no to self-medicate with alcohol and drugs. Murtaugh spoke with Ned who explained that his wife had died from cancer six months earlier.

At Paco’s auto shop, Murtaugh wanted to play things cautiously. However, Riggs had other ideas and walked straight in shouting for Paco. A fight broke out and Paco tried to get away but they stopped him. He explained that the money was still unaccounted for.

Later Ned contacted Murtaugh via text message for help. Murtaugh went to see him on his own. He found out that Ned was broke from all his wife’s medical bills. Also Ned was now in possession of the truck which he stole back from Donnie and Lonnie.

Riggs followed his own line of enquiry and arrived at Ned’s, surprised to see his partner there without him. They decided to take the money in but to give Ned a head start on getting away. While driving the money back, Riggs confessed that he gave some of the money to Ned.

Sadly Ned didn’t get far before being tracked down by the cartel. He called Murtaugh to ask for the money in exchange for his life. Riggs turned the truck around and drove to the exchange point. There they were outnumbered by armed cartel members.

Riggs decided to hit the gas and drive straight through them. A chase and shootout followed before he crashed and flipped the truck. As they began to fight back the Captain (Kevin Rahm) arrived with backup.

Elsewhere in the episode, Murtaugh struggled to find time with his wife Trish (Keesha Sharp). They kept trying to have a date night but things kept getting in the way.

At the end of the episode Trish was pulled over by a police car but was please when she realised it was her husband. They went for a picnic and she said it was the best date ever.

Watch the trailer for Lethal Weapon 1×04 There Goes the Neighbourhood below:

The official synopsis for Lethal Weapon 1×04 There Goes the Neighbourhood reads:

A string of burglaries hits close to home for Murtaugh when one occurs in his own neighborhood, and it gets just as personal for Riggs when another break-in ends in a casualty. Meanwhile, Roger Junior connects with an old friend who might be twisted up in some criminal action of his own.