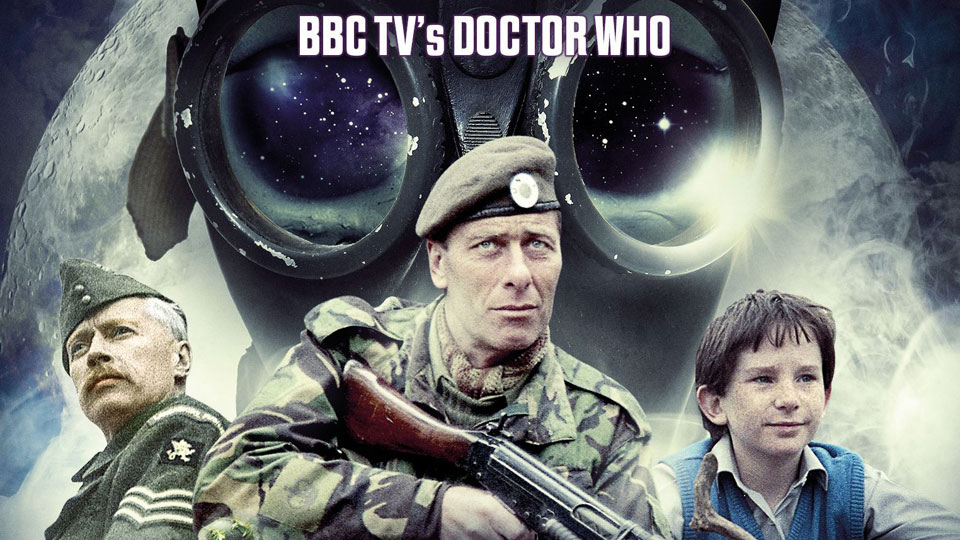 Doctor Who has a strange and not very linear history. Wartime is not an episode of Doctor Who, nor is it an official spin-off, it’s an independent production that borrows from the mythology of the show – in this instance the military sidekicks from UNIT.

Wartime was made in 1987, when the original series was still on air. It sees John Levene reprise his role as Sergeant John Benton, a part he had played opposite Patrick Troughton, Jon Pertwee and Tom Baker. It’s a job Levene clearly relishes, and his commitment to the part carries him through.

The half-hour movie sees Benton tasked by the Brigadier (a lovely voiceover cameo by Nicholas Courtney) with delivering radioactive material to UNIT HQ. The route takes him close to a derelict gardens from his childhood, and he is haunted by memories of his tragic past, with ghosts of his father, mother and brother coming back to haunt him.

The actual story itself doesn’t make a whole lot of sense, and neither do Benton’s motivations. It does, however, work at the level of a ghost story, and the outdoor location is well-chosen and atmospheric. Its short running-time ensures it doesn’t outstay its welcome, but there are many overly-ponderous shots of John Levene wandering through gardens and woods looking pained.

In terms of the performances, it’s lovely to see John Levene teasing out a bit more to the character of Benton; though the warmth he exudes in Doctor Who takes a backseat to less successful attempts to play it macho – well, it was the late 1980s, I suppose. There’s a terrific performance from Michael Wisher as Benton’s father. Wisher had appeared in Doctor Who many times, most famously as the original Davros, creator of the Daleks. Whilst Levene and the other actors give 100% to the production, there is an obvious gulf in talent between them and Wisher.

The sound quality of Wartime is surprisingly good, but the picture quality doesn’t look great on modern TVs. This would have been less of an issue in the 1980s when the production was intended for home video release. Mark Ayres, who went on to very successfully score music for some instalments of the Sylvester McCoy era, is rather less effective here with a synthetic soundtrack that quickly irritates through its sheer insistence. The main issue with it being an independent production is that it is small budget and made by semi-professionals who mean well, but lack the skills and experience. Wartime works hard to create drama, but thirty years on, it looks rather creaky.

Nevertheless, Doctor Who fans, who will comprise the audience for Wartime Chronicles, will not be disappointed: there’s a lot spread across the two discs for them to savour. It’s a chance to enjoy a Doctor Who-related curiosity that you may never have seen before, and see John Levene resurrect the much-loved Sergeant Benton over a decade after he’d last appeared on screen.

It’s the extra features that will prove as much of, if not more of a draw. The first disc is dedicated to the Wartime production itself, with a ‘Making of’ documentary as well as a featurette on other fan-made Doctor Who efforts (all of which make Wartime look like a masterpiece). Many more independent spin-offs not featuring the Doctor were made in the 1990s after the show was cancelled to sate fan appetites, some featuring Doctor Who alumni and famous faces (the various members of The League of Gentlemen). Most of the features on disc one were made in the 1980s, but thankfully there’s a contemporary interview with director Keith Barnfather and Katy Manning. As usual, Manning is delightfully daft and a joy to watch.

The second disc features various members of the UNIT team at Doctor Who conventions. There’s a documentary around a 2001 Doctor Who convention in Chicago, which features Nicholas Courtney, Richard Franklin and others, with a satellite appearance by Manning. Terry Dicks and Derrick Sherwin are interviewed separately and also feature. More remarkably still, there’s over an hour’s worth of footage from a 1986 Doctor Who convention where the panel features Jon Pertwee, John Levene, Terry Walsh and Richard Franklin. It’s shot cheaply, but the sound and picture quality is surprisingly good, with the panel’s voices very clear. It’s only the audience questions, recorded without mic, that are inaudible. It’s amazing to see convention footage of Jon Pertwee, relaxed and smoking, holding court as he reels off his favourite anecdotes about his time on the show. It was only a few years after The Five Doctors was made, which they talk about. We weren’t sure at first that a second disc was warranted: but there’s some amazing footage on it.

For Doctor Who fans, Wartime Chronicles is a treasure trove of footage of the much-loved stars of 1970s Doctor Who, and with a running time of over four hours, there’s way more on this release than just the thirty-minute Wartime drama. If you’re serious about your Who, and if you remember conventions yourself, there’s a wealth of nostalgia to be found in this release.