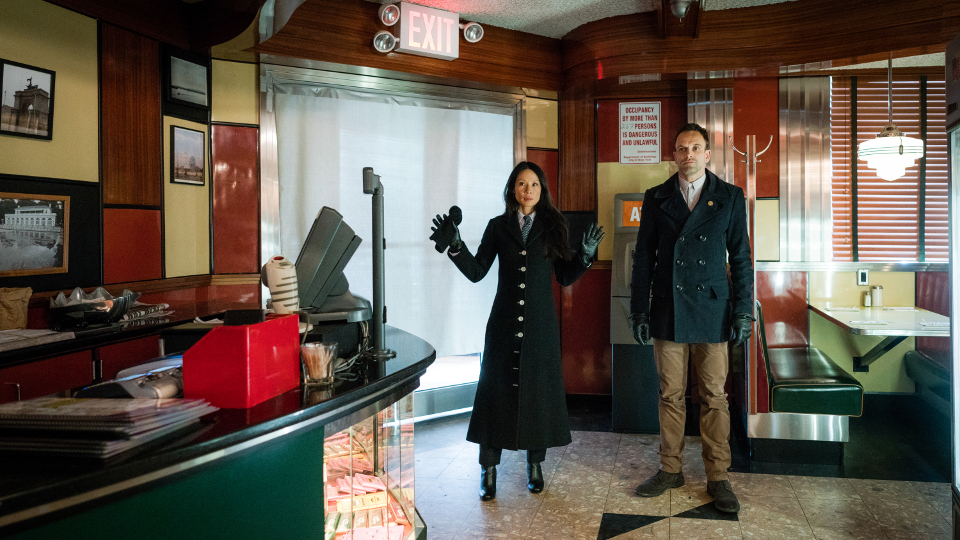 The latest episode of Elementary, saw Sherlock (Jonny Lee Miller) investigate the murder of a man dressed as a clown.

In the opening of the episode, two men were chasing a clown through some woods. They lost sight of him briefly before finding the body a clown covered in leaves. The local police were called and Sherlock turned up to help. The dead clown had been there for at least 24 hours.

Sherlock and Watson tracked down the clown that the men had been chasing. He worked at a viral ad company and new the dead clown. They discovered that the dead clown had written a negative article about the company.

Further investigation led them to a file share used by the dead clown. Two pictures taken on the night of his murder showed the silhouette of a man in the woods carrying a crowbar. Sherlock went to investigate with Detective Bell (Jon Michael Hill) and discovered a manhole.

After opening it up Sherlock realised it led to the water supply for New York. Inside he noticed a strange substance that led him to believe that someone had tried to poison the water. This seriousness of this information got the Departments of Homeland Security and Environmental Protection involved.

As the contamination hadn’t reached the city, Homeland Security wanted it kept under wraps. However the story was leaked to the press causing a public panic. The contamination in the water was caused by a virus created specifically to bypass the chlorine and UV fail safes. This led them to identify a microbiologist who had created the virus.

Eventually Sherlock realised that he must had been paid to do so. This led him to work out who would benefit from such a virus. Due to the quality of the water there was no need for a filtration plant. The person with the patent on the filtration system turned out to be the guy from the Environmental Protection agency.

Elsewhere in the episode, Detective Bell (Jon Michael Hill) had a date with A.D.A Chantal Milner (Chasten Harmon). While waiting for her at the bar she called to ask for a rain check as she had become swamped at work. As he went to leave the bar, Bell bumped into a man who dropped his drink. Bell offered to buy a new one but the man was angry and the pair got into a fight.

The next day Milner was furious with Bell and he found out the man he fought was her ex-husband, Roy Booker. He’d been to her office to cause a scene causing her problems. Watson looked into the bar fight and discovered that Booker was there intentionally. He had been paid to cause problems to get Milner thrown off a big case.

At the end of the episode, Bell confronted Booker again and warned him off Milner. Bell had evidence against Booker that could cause him problems with a fake injury he had used to get early retirement. If he stayed away Bell agreed not to start an investigation.

The next episode is Over a Barrel. A man takes hostages, including Joan, and threatens to execute them unless Holmes finds the person responsible for the death of his son. As Sherlock investigates, the captor gives him 16 hours to find the perpetrator before the statute of limitations on the crime runs out.