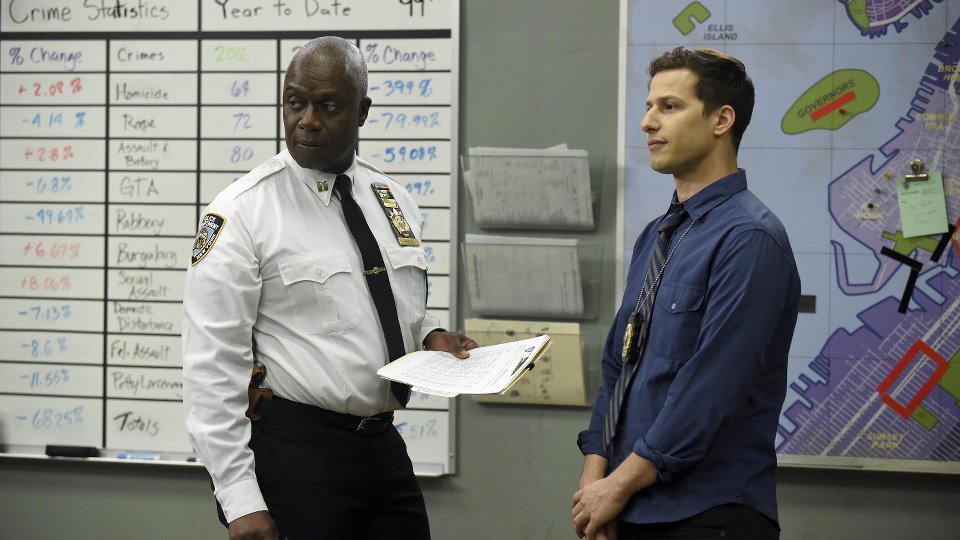 Brooklyn Nine-Nine’s fourth season continues this week but there’ll be no more double bills, at least not for the moment.

Instead we’ll get just the one new episode this week but still it’s better than nothing isn’t it?

In the latest double bill Peralta (Andy Samberg) met Santiago’s (Melissa Fumero) father and learned where she got her obsessive compulsive behaviour from. The two men didn’t hit it off but they did manage to solve an old case together while Thanksgiving was thrown into chaos at Santiago’s thanks to Boyle (Joe Lo Truglio) bringing a live turkey to the festivities.

In the second episode, Skyfire Cycle, Terry (Terry Crews) worked the case of an author he’d been a fan of since a kid. He roped Peralta into the investigation and they discovered that the author’s former assistant had been sending threatening letters. Meanwhile Santiago and Diaz (Stephanie Beatriz) tried to help Holt (Andre Braugher) resolve a row with his husband and Boyle and Gina (Chelsea Peretti) fought to win over the Boyle family so they could go to their desired holiday destination.

The next episode of the season is The Overmining. Peralta and Holt help CJ with a big case that is proving problematic. Jeffords tells Gina to remove her precious portable heater from the office.