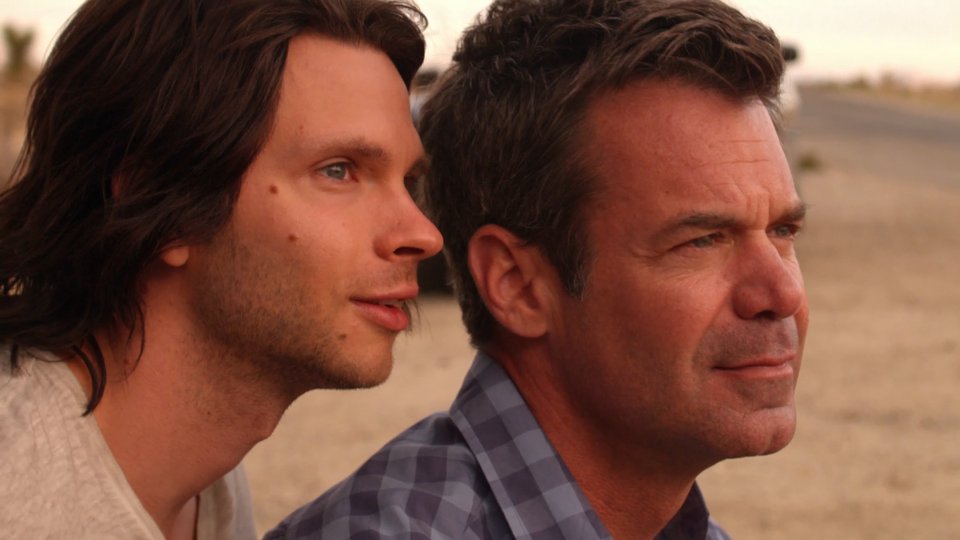 Jonathan (Tuc Watkins) searches the streets for a male prostitute to spend a night with. Following a false start, Jonathan sets his eyes upon Adam (Devon Graye) and the two share an evening together. The next morning Jonathan offers Adam a substantial amount of money to accompany him on a road trip but explains that there are rules he must abide by. Firstly Adam is only to answer to the name of Brandon and he’s given a back-story by Jonathan that he must follow during their time together. As they hit the road, Adam attempts to dig deep into Jonathan’s past to get an understanding of who he is and what his intentions towards him really are.

Retake is the feature directorial debut for Nick Corporon, who is best known for a string of shorts including Last Call (2009) and Barbie Boy (2014). At its heart Retake is an indie road trip movie with a mystery that slowly unfolds over its duration. Corporon purposely makes you feel on edge for the first half of the movie as you try to work out if Jonathan poses any kind of real threat to Adam or not. I don’t want to reveal too much here because telling you which way it turns out, will undoubtedly spoil the experience.

Suffice to say all is not what it seems and Jonathan doesn’t pick the name Brandon by accident. Adam starts to get under the skin of Jonathan and a genuine affection grows between them, even though neither is particularly sure of the other. During their road trip they bump into another couple James (Derek Phillips) and Iris (Sydelle Noel), who seem to be on their own journey of discovery. The interactions with that couple change the game a bit too for Jonathan and Adam as the lines between role-play and reality begin to blur, propelling the film into new territory as the tables turn and answers start to be delivered.

The performances of the two leads – Tuc Watkins and Devon Graye – are very strong. Watkins is perhaps best-known for his role on Desperate Housewives and it’s nice to see him getting some real space to show off what he can do. As Jonathan he is perfectly mysterious and moody, and he possesses an edge of menace that hooks you into the film. Graye,, perhaps most recognisable from his guest stint on The Flash, is a revelation as Adam. He brings a lot of layers to a character that could easily have been two-dimensional and he fosters real chemistry with Watkins.

Retake is an interesting movie that takes plenty of twists and turns over its run time. By the time the end rolls round, you may not be all that surprised when the answers are delivered but it’s an entertaining ride getting there. I must admit I thought I’d worked it all out early on but it didn’t stop me from getting a sense of dread for Adam throughout. Retake is a film that deals with addiction, loss, intimacy and emotional connection, and it does so in a considerate and engaging way.