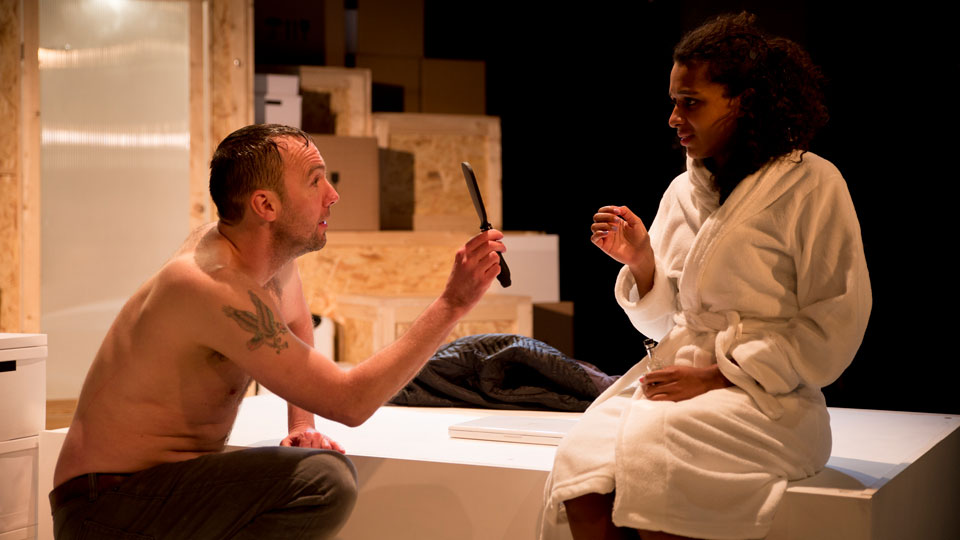 The world premiere of Abigail by Papatango award-winning playwright Fiona Doyle will close The Bunker’s highly-acclaimed inaugural season, playing from now until 4th February. Abigail will be directed by The Bunker’s Artistic Director, Joshua McTaggart. Originally written in 2013 when it was long-listed for the Bruntwood Prize, The Bunker’s production stars Tia Bannon (The Winter’s Tale and Pericles, The Globe) and Mark Rose (King Lear, The Old Vic; Hangmen, Royal Court).

In a snow-covered Berlin, a young woman meets a middle-aged man and they fall in love. As the year progresses, they fall apart. Told across a fractured timeline where the past and present collide, Abigail explores the fragility of love and the desperate measures we all go to in order to keep control in an unpredictable world. How far would you go to take control? Would you lie? Would you fight? Would you scream and shout or shut down and cry? In a world where so many things are out of our control, what happens when the one thing you think you need is the one thing you cannot have?

The ethos of The Bunker is about nurturing a performance environment where audiences stay after the show to enjoy events, discussions and drinks in the auditorium. Alongside Abigail, The Bunker will be bringing together an array of artists to explore the question ‘How would you take control?’ with new work-in-progress showings, poetry evenings, music nights and dance response pieces including the brilliant Pint-Sized plays, the lyrical poet Bridget Minnamore, and dance performances.

Artistic Director Joshua McTaggart says, “When I first read Abigail, I was blown away by its beauty and poetic lyricism. There is a darkness to Fiona’s story that allows us to shine a light on some of the more sinister aspects of love and relationships. It is a privilege to be reunited with Fiona once again as we both shared our professional debuts together. In the two months since we opened, The Bunker has become a place for artists to experiment and audiences to explore and I cannot wait to continue this ethos with the world we create for Abigail.”

Writer Fiona Doyle says, “I’m thrilled to be working with the team at The Bunker. It’s an incredibly exciting venue run by people who are not only passionate about ambitious theatre, but who want to push the boundaries of performance and performance space also. I’m flattered that Abigail is part of their very first season and can’t wait to get into the rehearsal room.”

In this article:Abigail, Fiona Doyle, The Bunker