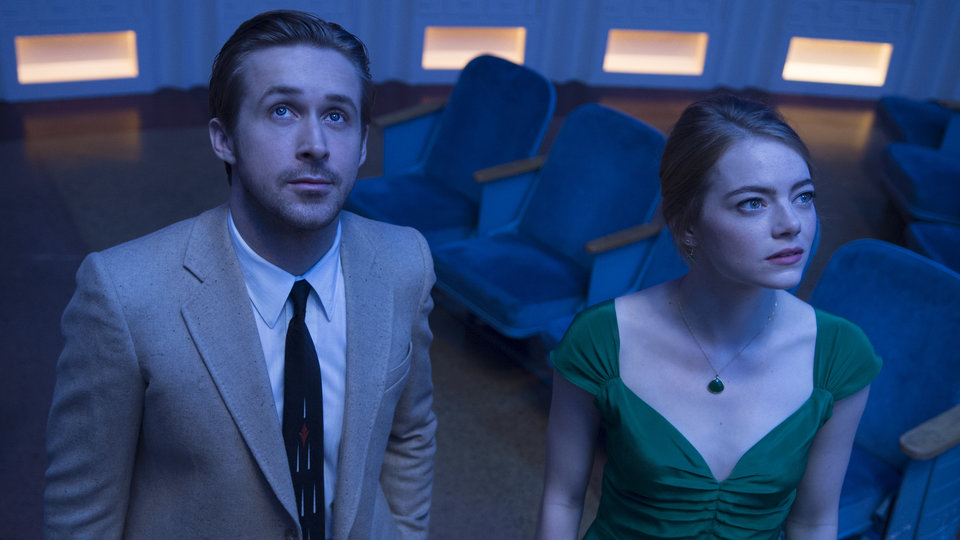 Writer/Director Damien Chazelle’s glorious ode to Los Angeles will take some beating as the best film of 2017 (and it’s only January). This quintessential romance of our time is a musical odyssey that’s bursting with invention, style and feel-good vibes. Aspiring young actress Mia (Emma Stone) meets Sebastian (Ryan Gosling), an idealistic but down on his luck jazz musician. Sparks soon fly and romance blossoms as they chase their dreams in the city of angels.

The overriding success of the film lies in the chemistry between its two sensational leads. Emma Stone and Ryan Gosling are a modern day Fred and Ginger – a couple that have lit up our screens together in the past with gems like Crazy, Stupid, Love and Gangster Squad, but who take their onscreen chemistry to dizzying new heights here. Both are magnificent here… easily selling the romance and delivering some breathtaking dance routines and vocal performances.

Director Damien Chazelle had a tough task ahead of him after the success of Whiplash. Given a free pass to make whatever film he wanted to after that triumph, Chazelle wisely picked his passion project (which at one point had Emma Watson and Miles Teller attached). In doing so, he made the film he wanted to with minimal studio interference (which I believe wouldn’t have been possible without the critical and commercial success of Whiplash). Given how fickle the Hollywood system is, it makes the success of La La Land even more impressive as a result.

La La Land also has a magnificent soundtrack that’s full of outstanding musical numbers by Justin Hurwitz. These go on to define the film (coupled with some amazing choreography), and together really echo the classic musicals of the past. Its masterstroke is that every single musical set-piece in the movie is exceptionally crafted – not just in terms of grandeur and scale, but in the way it furthers the narrative. It manages to conjure all the emotion needed to push this romantic story through to its outstanding finale. This is the first must-own soundtrack of the year.

A simply stunning affair with Ryan Gosling and Emma Stone on mesmerising form, La La Land is as magical and sincere as they come. The music is sensational, the spectacle is vibrant and the story is deeply affecting. It’s safe to say La La Land warrants all of its hype and is destined to become a modern day classic. With awards season in full swing, expect this to sweep the boards – and rightly so – as this is a stunning effort from everyone involved. All the awards of 2017 go to…