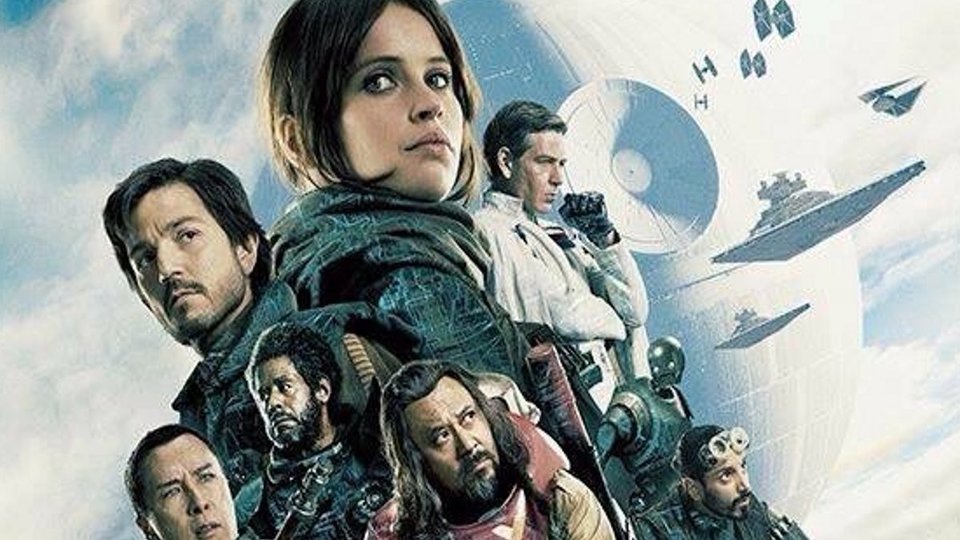 Rogue One: A Star Wars Story is a barnstorming success from start to finish that delivers an unforgettable movie going experience. Easily sitting as the best Star Wars film since Return of the Jedi, Rogue One manages to create a lasting legacy with just one standalone film. It perfectly bridges the gap between the end of Revenge of the Sith and A New Hope to carefully balance a fresh new set of characters (with some very recognisable faces along the way).

Of course, the most familiar face of all is Darth Vader and his scenes in Rogue One are amazing. Since this is a spoiler-free review I won’t go into them in detail but they are ultra cool in both their inception and implementation. But Rogue One’s real success lies in its diverse line-up of new characters who all club together to form a mismatched band of rebels tasked with stealing the plans for the Death Star.

Leading the line is a sensational performance by Felicity Jones as Jyn Erso, the daughter of Galen Erso (Mads Mikkelsen), a scientist and engineer who is kidnapped and forced to create the Death Star for the Empire. Years pass, and a grown up Jyn receives word that her father is alive and that he has rigged a booby-trap in the Death Star, something that could turn the tide in the favour of the Alliance.

Uniting with Cassian Andor (Diego Luna), an Intelligence Officer who serves the Alliance, a blind warrior-monk named Chirrut Îmwe (Donnie Yen) and his friend and battle companion Baze Malbus (Wen Jiang), a droid named K-2SO (voiced by Alan Tudyk) and pilot Bodhi Rook (Riz Ahmed), Jyn forms a unlikely group of Rebels to undertake a perilous and unsanctioned mission to steal the plans of the Death Star itself and by doing so, sets up the Alliance’s best chance for peace in the galaxy. But Orson Krennic (Ben Mendelsohn), a Lieutenant Commander in the Galactic Republic has other ideas.

Felicity Jones shares a wonderful chemistry with Diego Luna, who himself hands in a career-best performance here. Alan Tudyk steals his scenes and provides a lot of comic relief as K-2SO while Donnie Yen and Wen Jiang bring bags of cool to the equation with some amazing fight choreography. Riz Armed adds a nice dash of reality to the mix too.

Elsewhere, there is a sensational villain turn for Ben Mendelsohn to really have fun with. He gleefully menaces the screen and is the biggest success of the film. Forest Whitaker is solid but a bit hammy, Mads Mikkelsen is a joy to watch and needed more screen-time and Genevieve O’Reilly does what she needs to as Mon Mothma.

There are plenty of surprises in the film and I won’t spoil any of them. But rest assured that fans of the classic trilogy will be more than happy at how this film honours the legacy of A New Hope. But what is worth mentioning is just how action packed the film is. The set-pieces are incredible, especially in IMAX, and really deliver a war movie the likes of which this franchise hasn’t seen since the days of Episode IV. Darker in narrative tone, the film plays more like The Empire Strikes Back and that’s where director Gareth Edwards has really excelled – crafting the right balance between character development, spectacle and story.

What is interesting to note is just how many scenes from the Rogue One trailer didn’t make the final cut. There’s a lot of them and they all look like they would have been great to see onscreen (a particular favourite was Jyn coming face to face with a Tie Fighter), but the extensive reshoots culled their involvement. Hopefully one day we’ll get to see the initial directors cut because it looks to have ended the story in a much different manner and that makes for an interesting comparison. After watching Rogue One do rewatch the trailer to see what’s been taken out – it adds a unique perspective to the film.

Rogue One: A Star Wars story is its own beast and that gives it the freedom and audacity to really deliver thrills of the highest order. The characters are engaging, the action is sublime and the story is heartfelt and sincere. Easily better than Star Wars: The Force Awakens, Gareth Edwards has given true fans exactly what they want, whilst delivering a mass-appeal blockbuster with plenty of action, suspense and humour. Star Wars Episode 8 has a lot to live up to now.