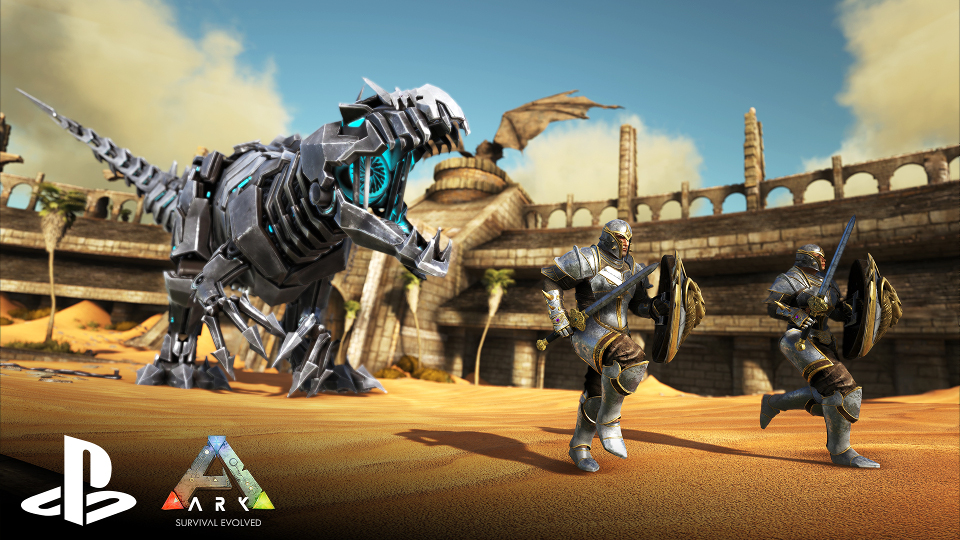 Studio Wildcard has brought its dinosaur-infested islands to PS4 in Europe with the release of ARK: Survival Evolved. PS4 ARK players are set to receive a constant stream of major updates packed with new dinosaurs, weapons, armor, mechanics, and lifestyle improvements, until it releases as a final product in Spring 2017.

Built on Unreal Engine 4 and developed in concert with porting partner Abstraction Games, this latest release delivers the base game, the massive desert-themed expansion, ARK: Scorched Earth or buy them together for a discount in the ARK: Survivor’s Pack.

Studio Wildcard have also revealed that ARK: Survival Evolved’s core game will receive a full content-complete retail release in Spring 2017. Distributed exclusively worldwide by Solutions 2 GO Inc., the physical disc-based ARK for PS4 and Xbox One will hit retail for €59.99. At that time, the equivalent console and PC digital versions of ARK: Survival Evolved will also be priced at €59.99, while the Scorched Earth Expansion Pack will be permanently available for €19.99.

In ARK: Survival Evolved, survivors wake up stranded, naked, freezing, and starving on a mysterious island where they must hunt, harvest, craft items, grow crops, and build shelters to survive in every biome. Survivors will tame, train, and ride more than 100 dinosaurs and other prehistoric beasts, including gargantuan creatures. In every available biome — Jungle, Snow, Swamp, Redwood, and Desert — you’ll be able to fly an armed Pteranodon squadron over the snow-capped mountains, race through a thick jungle with your pack of trained Raptors, tromp through a fortified enemy base with a convoy of gigantic Brontosaurus, or chase down prey on the back of a raging T-Rex.

In the ARK: Scorched Earth Expansion Pack, players will wake up in a fiery, drought-ridden desert world, where they must immediately seek water, hunt for food, harvest new flora, craft new items, and build shelter from the extreme heat. Use skills honed on ARK’s faraway Island to kill, tame, breed, and ride the fantastical new creatures that have evolved to survive the Desert’s ultra-harsh conditions, including… Dragons!

ARK: Survival Evolved is in development for Xbox One via the ID@Xbox program, PS4, and Steam PC. The game is available now for PS4, in Microsoft’s Game Preview on Xbox One and Steam’s Early Access program, which includes Oculus Rift VR support and an integration of Steam community features such as Steam Economy and Steam Workshop for custom maps and mods. Players can host private/LAN servers and have access to a custom-built version of the Unreal Engine 4 Editor for creating mods. The world of ARK is designed to be modder-friendly and ever-expanding.

Check out the official ARK website for more information.