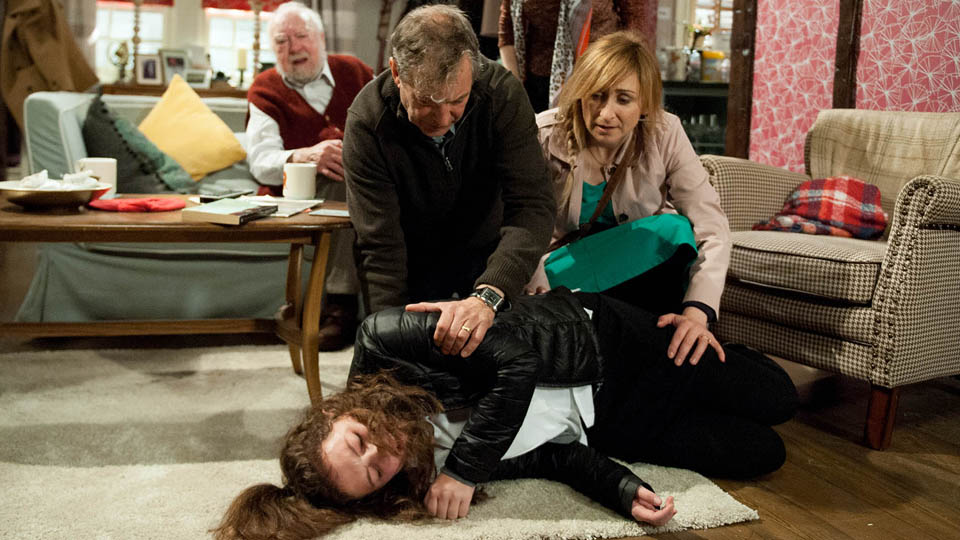 Welcome to our weekly look ahead and what’s going on in Emmerdale.  Lisa Dingle is back and isn’t happy with Belle’s news, Laurel’s not coping, Finn meets Kasim properly and could an old flame be reigniting?

Laurel offers Gabby support and tells her she needn’t take on the burden of Ashleigh’s illness alone, encouraging her to let go and be happy.  Unfortunately Gabby misunderstands and plots a boozy plan with Liv as the pair drown their sorrows at the cricket pavilion.  Soon Liv is setting Gabby a streaking challenge which she films and posts the video online.  Laurel isn’t best please when Tracy later shows her the video, but after Gabby is found being sick, she takes a turn for the worse and collapses.

At the hospital, Laurel is relieved to hear Gabby will be fine, but soon a confused Ashley accidentally hits Laurel after arguing with her.  When he realises what he’s done, he bursts into tears leaving Laurel with some thinking to do.

Meanwhile, Liv is secretly worried about the video and Belle finds her hiding and warns her to delete the video.  When she hears Gabby went to hospital she is filled with regret and apologises.  Bernice wants to take matters further and soon the police are knocking on the pub door.  Chas sides with Bernice until she accuses Chas of supplying the alcohol and threatens to get her liquor license revoked.  A furious Chas has a tough decision to make.

With all that’s gone on in the week, Ashley is more flustered than ever and Laurel is at breaking point.  Sandy offers to give her some time out by looking after Ashley and Dotty whilst she unwinds with Nicola.  However, when she gets home she finds a bewildered Ashley outside in his pyjamas and he almost steps out in front of Diane’s car.  At a loss for what to do, Laurel lies to Ashley that it’s bed time, but he becomes distressed.  What will she do?

The Dingle clan are appalled that Belle is going to leave for Boston with Jermaine, but she insists she’s making the right decision.  Soon they are plotting on how to get her to change her mind, starting with Cain who takes Belle on a car ride to make her see sense.

Lisa returns and is floored by the news her little girl is planning to move stateside, especially so when they learn that Jermaine’s job will be starting sooner than expected.  The Dingles throw a surprise party for Belle in the hope they can make her see what she’ll be missing.  Can they make her change her mind?

Lisa is also shocked to learn that Zak and Joanie are planning to move to Leeds and urges them not to go.  What are her reasons though?

Kasim comes to find his hero

Finn wants to seek out Kasim encouraged by Emma who thinks it’ll be good to distract him from his grief.  However, he finds out that Kasim has been discharged and fears he’ll never see him again.  You can imagine his surprise when Kasim comes to find the man who saved his life; the awake Kasim seems even better than the fantasy Finn had in his mind!

When Kasim invites Finn for lunch, Pete warns Finn it’s best to be honest as secrets have a way of coming out in the end.  Finn agrees to tell Kasim how often he visited him in hospital but as he prepares to come clean, Kasim pulls him in for a kiss.  Finn is over the moon that things are going so well but when Emma meets Kasim he’s hit with a wave of panic about what she’ll reveal.

Later, Pete is feeling guilty and encourages Finn to find Kasim and explain, little do they know that Emma is already on the case.  Can the pair reconcile and start afresh or will Kasim be weirded out?

With Pierce managing to deal with Liv’s taunts, Rhona is proud and decides it’s time she got things going again in the bedroom department.  She goes shopping for some surprises but when she goes to give him an early Christmas present she’s horrified to see it wasn’t what she bought.  It looks like there may have been a mix up as Paddy gives Chas a surprising gift!  Is that a flicker of an old flame between the pair though?  Rhona thinks so and goes about setting them up.

Moira is disappointed Hannah won’t be home for Christmas and Emma is there to comfort her much to Zak’s disgust.  Cain worries that Emma wants to take the farm but Zak is determined to make sure that doesn’t happen.

As Nicola says she’s called a solicitor about a divorce, Jimmy decides to go away for a month to give them space.  Nicola is heartbroken that her marriage might actually be over.

Leyla is anxious when she sees Frank teaching Jacob a card con trick.