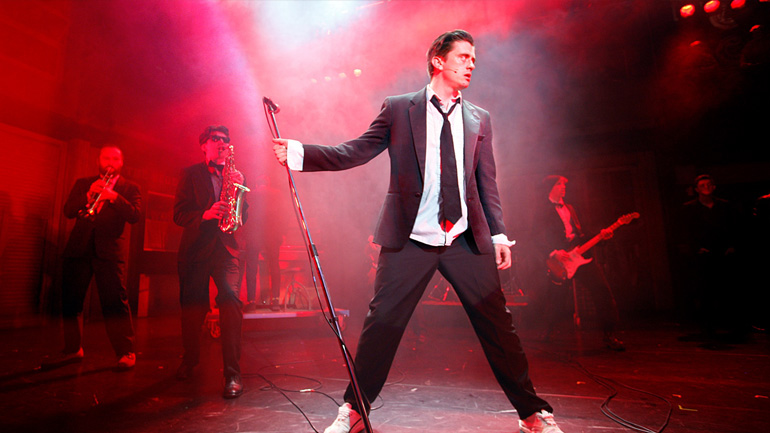 Leeds Grand Theatre is getting ready to welcome The Commitments to its stage following a hit West End run. The musical opens on Monday 5th December and is engaged for one week only.

The Commitments tells the story of Jimmy Rabbitte, a young working class music fan, who shapes an unlikely bunch of amateur musicians into an amazing live act, the finest soul band Dublin has ever produced. The show follows the journey of two members of a frustrated synthesiser band who turn to Jimmy, the local music expert, for help.

Placing a classified advert in a music paper Jimmy auditions a number of wannabes before finalising the new line up; The Commitments. The humour kicks in as the band get to know each other and their instruments, and proceed through early rehearsals for their first gig.

Coronation Street legend, Kevin Kennedy, stars in the critically acclaimed musical alongside many of the cast from the record-breaking show’s two-year run at London’s Palace Theatre, including Brian Gilligan who will reprise his starring role of Deco and Andrew Linnie as Jimmy Rabbitte. Kevin takes the role of Jimmy Rabbitte’s Da in the show that is written by Roddy Doyle, the author of the best-selling novel of the same name.

Kevin Kennedy won the hearts of the nation when he starred as Curly Watts in Coronation Street. Since leaving Coronation Street, Kevin has regularly appeared in theatre productions including: Chicago, The Rocky Horror Show, Chitty Chitty Bang Bang and We Will Rock You. Kevin said: “After working abroad, I am delighted to be returning to such an iconic musical as The Commitments. It is a pleasure to travel around the country playing to enthusiastic audiences who love this show.”

The Commitments promises to warm the soul all ready for Christmas. The Commitments is at Leeds Grand Theatre from Monday 5th to Saturday 10th December. Tickets are on sale now priced from £25 to £50.50. Book online at leedsgrandtheatre.com or call Box Office on 0844 848 2700.