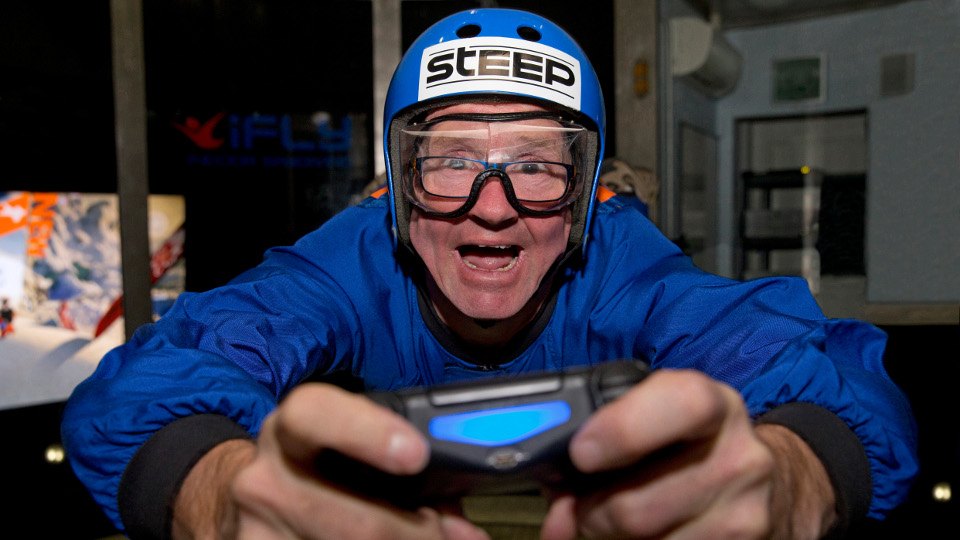 Braving speeds of up to 90mph, Eddie ‘The Eagle’ Edwards flew into the record books once again this week, becoming the first person to successfully play a videogame in a vertical wind tunnel.

Games publisher Ubisoft set out to put an extreme winter sports fan to the test by tasking them to play upcoming videogame, Steep, whilst balancing themselves in mid-air. Boasting an undeniable sporting prowess and his well-documented determination… Eddie did not disappoint.

Watch Eddie ‘The Eagle’ Edwards taking on the Steep challenge in the video below:

Eddie completed this unique challenge, finishing in the medal positions, whilst competing against two pro skydivers, who also attempted to complete the Steep challenge alongside the national treasure.

The challenge was an in-game wingsuit race on Mont Blanc – just one of many exhilarating locations in Steep. It’s no walk in the park… especially whilst flying through the air.

Eddie previously achieved hero status in the late eighties, when he became a British ski jumping world record holder and Britain’s first representative in the Olympic sport since 1929.

View some images of Eddie in action in our gallery below:

[blockquote]When we first developed the concept of playing a videogame in a wind tunnel, we instantly knew that there was only one person that we could call to take on the Steep challenge. Along with being a British icon and an absolute gent, Eddie stunned us all by not only mastering the challenge, but landing himself in the medals table too.[/blockquote]

Steep gives players the opportunity to ski, wingsuit, snowboard and paraglide, with the freedom to explore the incredible wintery scenes of the game’s open world. Riders can traverse the Alps solo or drop in side-by-side with friends to record and share the most insane tricks ever captured on the slopes. Designed for a generation that’s all about sharing their experiences with the world, Steep encourages players to challenge their friends to see who truly comes out on top of the world.

Steep will be released this Friday (December 2nd, 2016) on Xbox One, PlayStation 4 and Windows PC. Check out the official Steep website for more information.

Advertisement. Scroll to continue reading.
In this article:Eddie the Eagle, PC, PS4, Steep, Ubisoft, Xbox One