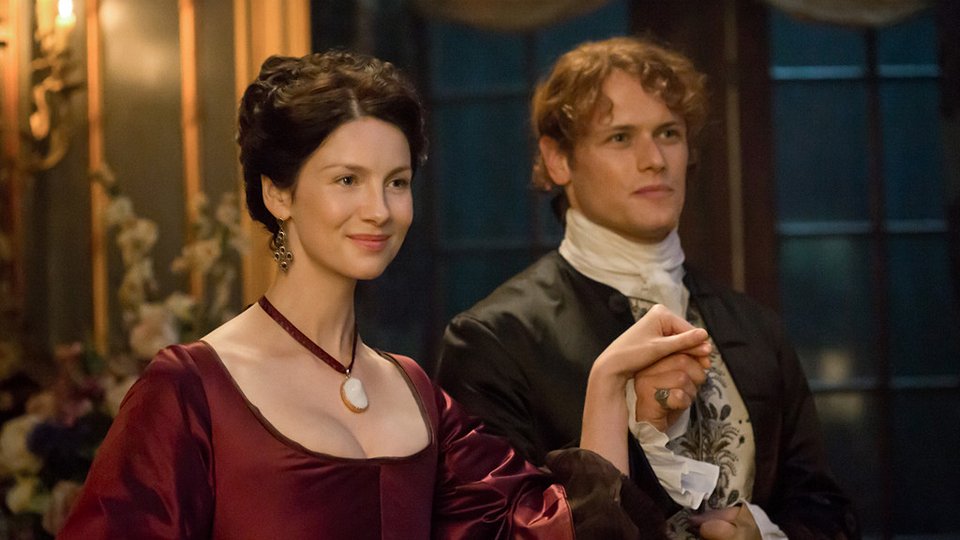 At the end of the first season of Outlander, Claire (Caitriona Balfe) helped Jamie (Sam Heughan) overcome his suicidal thoughts following his rape at the hands of Randall (Tobias Menzies). The couple set off for safety in France with Claire hoping to find Charles Stuart (Andrew Glover) and prevent the Battle of Culloden. Claire also dropped the bombshell that she was pregnant with Jamie’s baby.

Much of the second season is told through flashbacks. In the season’s first episode (Through a Glass Darkly) Claire is back in Scotland with Frank (Tobias Menzies) and early on in her pregnancy. The flashbacks reveal what happened when Claire and Jamie’s arrived in France, where they set their sights on foiling the Jacobite rebellion. With Jamie’s cousin Jared Fraser (Robert Cavanah) by their side they infiltrate Parisian society to set their plan into motion. A stumbling block appears early on when Claire discovers that someone she thought was dead is very much alive and that discovery impacts on both her and Jamie.

This season of Outlander consists of 13 episodes, a slightly shorter order than the 16 episode first season, and it continues to build on the epic story that begun in season 1. The show feels different in large part to the new setting for Claire and Jamie. The backdrop of France adds a new energy to the show and with viewers invested in both Claire and Jamie by this point, the season doesn’t gets as bogged down with the set-up like the first season did.

One of the things that Outlander is so very good at is balancing historical drama with well fleshed out characters. At the heart of the show is Claire and Jamie and there’s a sense that the two will never get the break they deserve. Time and time again they come up against obstacles that jeopardise their relationship and their future together.

Both Caitriona Balfe and Sam Heughan are excellent in their roles. Their performances are a big part of the reason why this show has had so much success. Their chemistry is natural and you really care about both of the characters. They went through a very tough series of events in season one and things only get harder during season two as Claire deals with her pregnancy and Jamie tries not to act on his very raw feelings of revenge.

The Blu-ray release is packed with special features including a gag reel, deleted and extended scenes with introductions by Ronald D. Moore, an extended version of episode Faith, several behind-the-scenes featurettes, and a series of Outlander podcasts.

If you liked the first season of Outlander than you’ll love the second season. I would say the show is one that’s likely to appeal to women more than men but there is plenty for everyone to enjoy. At times the pace of the show does bog it down a little bit but it’s an ambitious series that gets it right more often than it gets it wrong. It’s the perfect boxset to binge on during the festive season but make sure you have plenty of wine and snacks on hand to help you through it.