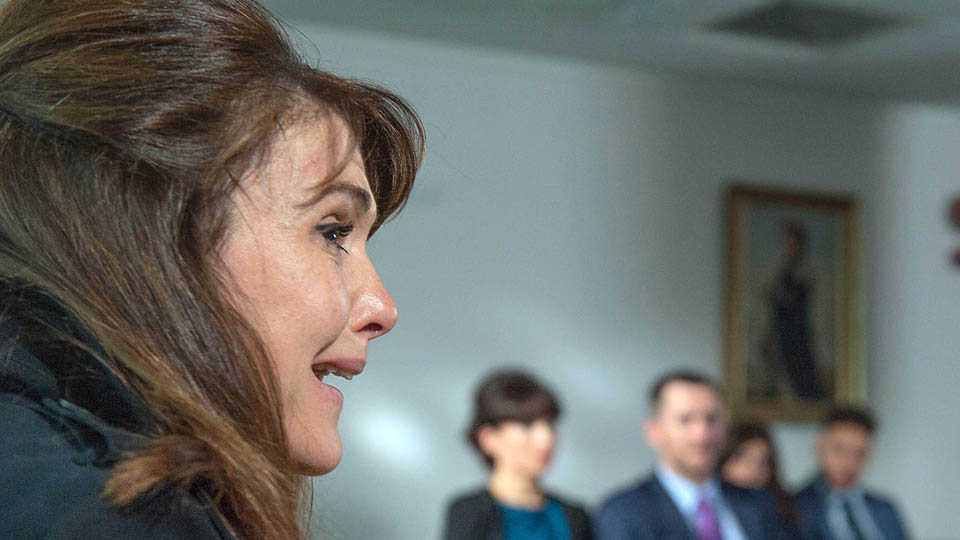 Welcome to our regular look ahead to what’s going to happen in Emmerdale this week and Emma makes an emotional confession, Pierce sees red and Frank is in a pickle.

Emma prescribes a case of self-medication to help her ease the guilt over James.  Leyla finds her fast asleep and when she sees the pills she tells her sons who fear she’s dead.  Ross presses on her whether she nicked the prescription sheets from Dr Cavanagh and she knows she’s busted.

She insists she’ll be fine for the inquest, but once alone her mask falls.  She turns up at the inquest promising the boys answers.  The pathologist takes to the stand and reveals that James’ drugs are consistent with his broken leg and then its Emma’s turn.  She breaks down saying that James’ death was her fault and the boys have no idea what is to come…

Pierce thinks that Liv was behind the flowers that Rhona has received and is raging when she denies it and accuses him of being just like her Dad.  Rhona warns Paddy that Pierce is on the war path leaving him worried about her.

Soon Paddy realises that Rhona wants to be with Pierce and interferes to make sure the pair are happy together.  But he warns Pierce to get professional help for his anger issues.  It looks like he’s taken it on board when he goes to counselling with Rhona by his side.

Belle is upset over her dad and Bailey, sensing that she’s upset over something, suggests she pour her feelings into a journal but she’s worried when she realises Joanie’s found her journal and may have read it.  At the factory, she’s relieved that Joanie is acting normal.

Jai and Priya announce that they are having to cut back the work force and suggest a ballot box for voluntary redundancy, making Kerry suspicious.  When the ballot box is emptied a furious Jai has to deal with his name on all the slips…but one;  Joanie’s name is pulled out, but who voted for her?

Zak is furious that Joanie’s lost her job and Belle is upset that everyone thinks it was her who got her sacked, but the real culprit is soon to be revealed and Joanie has a bombshell for Zak.  Later, they tell Belle they are moving.

Megan is giving Frank the cold shoulder so he turns his attention to his family and tells Tracy and Vanessa he can get David mate’s rates on Skydiving for his birthday.  Unfortunately, Eric lets it slip to David who tells them all that he’d rather do a fundraiser for his cancer ward rather than sky dive.

Frank dresses as an elf to help out at the fundraiser and doesn’t see waiter Bobby getting off the bus.  He pretends to be a reporter and asks Tracy about her Dad;  he’s soon threatening Frank and demanding money and fast.

Frank sees Tracy come in with a huge cash donation from Lawrence and Frank has to battle with his conscience.  Will he steal the money for Bobby?

Carly helps a failing Brenda with her sales technique for her knock off make up products but later realises the stock causes rashes after she uses some on Marlon.  Carly warns Brenda but is it too late?

Meanwhile, April schemes to get Carly to move in with her and Marlon.

Finn visits Kasim in the hospital to talk about his dad.

After a false start, Adam convinces Victoria that he does want a child with her but is shocked when she puts him on a fertility diet!