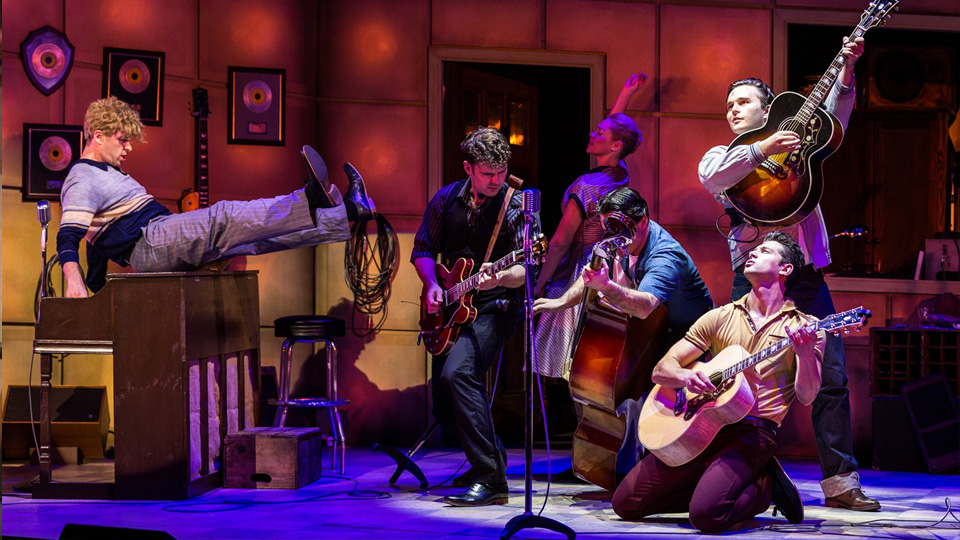 Leeds Grand Theatre is rockin’ this November as Million Dollar Quartet rolls into town. Based on the extraordinary story of Sun Records and its founder Sam Phillips, the musical offers is a whistle-stop tour of legendary hits from the Fifties, featuring Elvis Presley, Johnny Cash, Jerry Lee Lewis and Carl Perkins.

Whilst it may seem unfair to pigeonhole Million Dollar Quartet as another jukebox musical, it’s difficult to argue otherwise. The show is light on drama, serving to bookend a succession of incredibly well-performed rockabilly hit numbers from its famous stars. The story is beautifully simple, locked within the smokey recording suite of Sun Records: Sam Phillips is a DJ entrepreneur who sniffs out raw talent, records bold new sounds and ships his product to as many radio stations as possible. He is the man who discovered Presley, Cash and Perkins and launched the careers of Jerry Lee Lewis and Roy Orbison. To many, he is the true godfather of Rock ‘n’ Roll.

The core of the play revisits a unique moment when Presley, Perkins, Cash and Lewis drop into Sun Records studios and jam together in a fusion of competitive playfulness. From sing-offs to sarcasm, solos and slagging, the play recaptures the egos and conflict behind some of the most famous Rockabilly hits of all time.

The collaboration also signposts a transition when Cash and Presley announce they’ve decided to sign with a new, commercial record label. This is a story of songbirds flying the nest, with a father reluctantly waving goodbye to his graduating talent. Punctuated with classic hits like That’s Alright, I Walk the Line, Hound Dog and Blue Suede Shoes, the swansong session breathes its period on stage, crackling with an irresistible energy. Contextualized within the environment the tracks were committed to audiotape, Million Dollar Quartet succeeds in resurrecting the raw talent of its performers, convincing its audience they really are sharing space with the likes of Presley and Cash.

The musical is wholly sustained by a skilled cast who perform and play their own instruments live. Matthew Wycliffe showcases a superb talent on electric guitar as Perkins, whilst a cool Robbie Durham is perfectly cast as Cash in a considered, deep performance which is convincing from top to toe. Presley is powerfully drawn by Ross William Wild in a performance which is wholly natural; full of swagger and shyness, it is a study which captures the vocals and movements of the King with a refreshing subtlety. In a showstopping performance, Martin Kaye is electrifying as wild Jerry Lee Lewis, fighting his piano with all the rage of a controlled explosion. Katie Ray brings much elegant beauty to the boys’ club of performances with a steamy solo of Fever as Dyanne.

Jason Donovan gives a relaxed and centered performance as Phillips. Some may feel a little cheated that his role does not command a vocal performance, but Donovan has proven in recent years that his dramatic talent more than matches his musical abilities. Here he plays the senior, sage mogul with a casual drawl and swagger which feels wholly sincere. Phillips is a money man involved in big business, but Donovan successfully draws out the artistic essence of a man who truly loves, and understands, the new music he’s nurtured into existence.

Million Dollar Quartet is a fast and furious rock musical. Packed full of explosive rockabilly dynamite, it will enthrall and educate the young whilst washing waves of nostalgia over older rockers. Relentlessly rocking, it recalls and reaffirms an exceptional period which defined a generation and changed the world. Dig out your dancing shoes and go see.