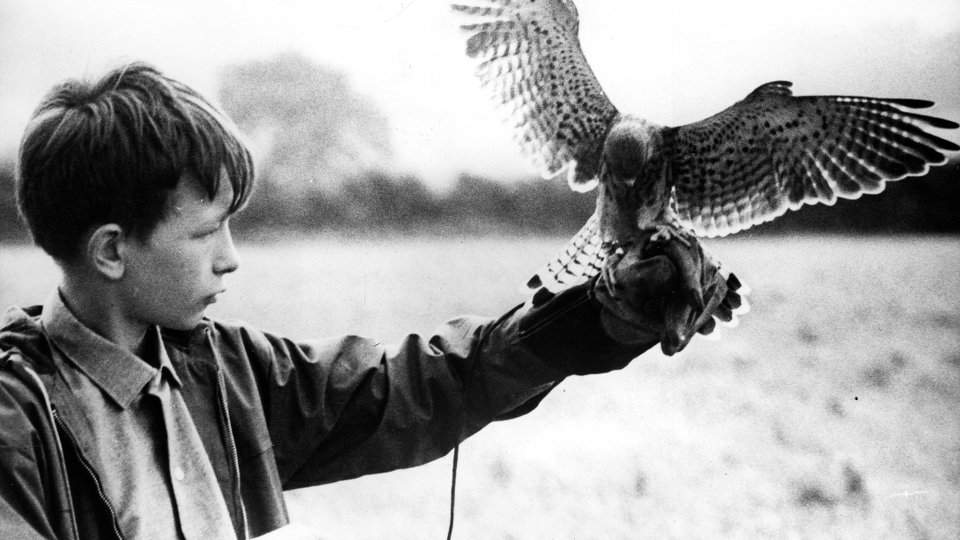 The story of Billy Casper as found in Kes is an unforgettable one, and it resonates with every generation that has come since the late Barry Hines wrote A Kestrel For A Knave. A year after the astonishing book was published, in 1968, Ken Loach set about creating a film adaptation which achieved an astonishing feat – it managed to be as artistically brilliant and profound as the source material.

It’s a simple enough narrative: we follow a day in the life of a scrawny, under-nourished teenager living in Barnsley in the sort of grinding poverty that was reality for most people living in large northern post-war towns and cities. A hopeless case, the uneducated, neglected and bullied Billy, picked on for his shortness, survives scraps at school and abuse from his brother at home. He survives the indifference of the education establishment (save for one teacher); and he survives the drudgery of daily life by escaping into the nearby countryside and adopting a pet kestrel that he teaches himself to fly and look after through a stolen library book. The beautiful bird – Kes – is the one ray of light in Billy’s life.

Even if you didn’t discover this remarkable film in your teenage years, it’s one that retains its power for viewers of any age. The cruelty of the school system is enough to make you glad you’re no longer part of it. This is taken to an extreme with the at once comic and grotesque but also bullying PE teacher Mr Sugden (played by the late, great, former boxer Brian Glover), who exemplifies the sadism of that particular species. The absurd football match between Manchester United and Tottenham Hotspur, in which Sugden lives out his frustrated dreams, and the subsequent torture of Billy in the cold showers, will send shivers down many spines. It’s a sequence that is as funny as it is tragic, heartless and sickening.

Ken Loach’s eye for naturalism, using non-actors and lending the movie a documentary-feel by shooting entirely on location, has never been more powerful, and the realism pulls on the heartstrings. Kes is never emotionally manipulative in a sentimental, Disney-style; Loach rather draws you in and allows the characters and the story to inform the viewer’s emotional responses. It is starker and more startling than ever in high-definition which makes it look like the film was shot yesterday.

David Bradley is perfectly cast as Billy. Even at a young age, he has a lived-in face that can convey both mischief and a survival instinct as well as the ever-betrayed wide-eyed innocence. Colin Welland, the best-known professional actor in the film, plays Mr Farthing, the sympathetic English teacher who takes an interest in Billy’s life and his escape from reality flying Kes.

Kes is a masterpiece. It’s a film that you think about for days afterwards, and once seen, is never forgotten. The social injustices and the gulf in opportunity between the affluent south and impoverished north in the decades after the war is perfectly spelled out in Kes. Times have changed, but social injustices and deep senses of alienation remain in Britain today, leaving Billy Casper an icon of the neglected, downtrodden and ignored.

This Blu-ray release has many extras, including a theatrical trailer. Those interested in Loach’s perspective on his finest work will enjoy a 1992 interview as well as a 2006 reunion where he sits on a panel with Barry Hines and Colin Welland, who have both sadly died since. Thankfully, their contributions to this amazing film will ensure their work lives on.