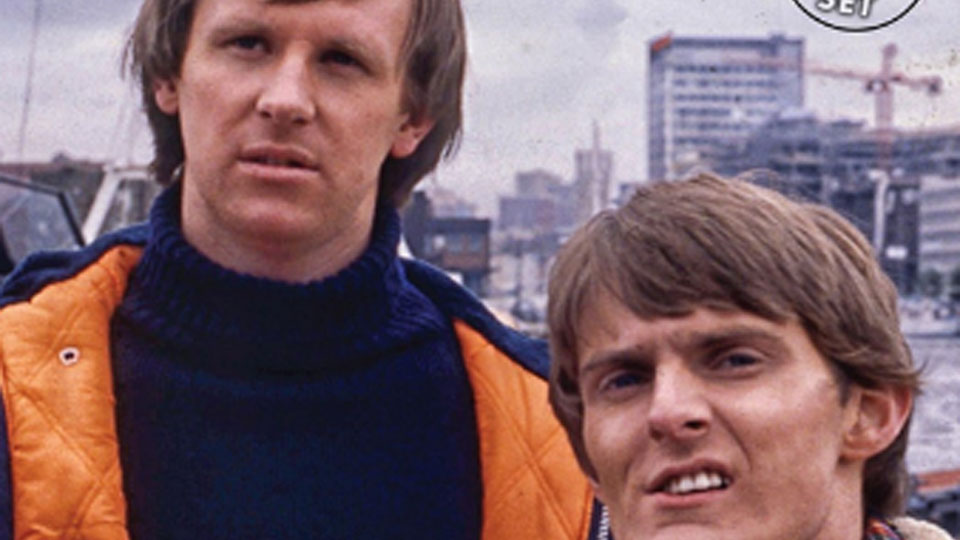 Sink or Swim is a situation comedy made by the BBC in the early 1980s. It concerns two brothers from Newcastle: the socially-climbing and aspirational Brian (Peter Davison) and the loutish Steve (Robert Glenister). The series follows their misfortunes as they at first relocate to London, before returning north when Brian goes to university.

Various girlfriends are thrown into the mix, most significantly in the form of Brian’s love-interest Sonia – a wholesome and humourless Guardianista who sells sandals and health foods. She proves a constant source of conflict, with her London garden-party idealism striking against Steve’s say-it-like-it-is pragmatic view of life.

It’s a product of its time, and it’s many years since sitcoms were made with such obvious set-ups and punch lines; yet it’s not without its charms, and it’s certainly many degrees of magnitude funnier and more appealing than the leaden series that writer Alex Shearer followed it up with – The Two of Us – which suffered relegation to commercial channels and was poor even by ITV’s inglorious comedy standards.

A note of historical significance is that the star of Sink or Swim, Peter Davison, took on the part immediately before his casting as the Fifth Doctor in Doctor Who. The perceptive viewer will notice that the colour of his hair changes between seasons, reflecting the highlights he was given for his part as the Time Lord. In one of the later episodes, Brian applies for a loan at the bank, which sees Davison appear opposite Nicholas Courtney (the Brigadier) one year before they worked together on Doctor Who – providing fans with an unusual alternative universe to enjoy.

As with any series of this kind, some episodes are better than others, but the thirty-minute running time for each always feels a touch too long, and at three seasons, it probably outstayed its welcome, too. Surprisingly for a sitcom of the time, it features a fair amount of location filming, which is committed to 16mm film and uses Central London as well as Bristol doubling for the capital in other scenes. The interior studio scenes are shot on tape, and the picture quality is variable, with occasional minor distortion.

It’s the camaraderie between Davison and Glenister (best known for Hustle) which carries the show, and it is a pleasure to see the two of them on screen together. Sara Corper is the least successful element of the main cast, with exaggerated acting that belongs to a different school to Davison and Glenister’s attempts to play it truthfully, but at least it’s refreshing to see the loony left ridiculed. Davison would later resurrect his generic northern accent, and with much greater success, in At Home With the Braithwaites.

Sink or Swim was a standard sitcom of its time. It didn’t push at the boundaries of comedy or offer anything especially remarkable. Yet there is a universality to the story of the Webbers that retains an appeal. As a northerner who moved south, originally to London, with both a mixture of Brian’s wide-eyed hope and desire to please as well as Steve’s unfaltering ability to see through the layers of liberal elite bullshit, it’s a set-up I can strongly relate to, and I enjoyed the majority of the episodes.

This is definitely a good purchase for nostalgia buffs. I said that it’s a product of its time, and there’s nothing wrong with that. Watching all three series of Sink or Swim transports you unmistakably to the early 1980s – a time when Peter Davison was rarely off the BBC.