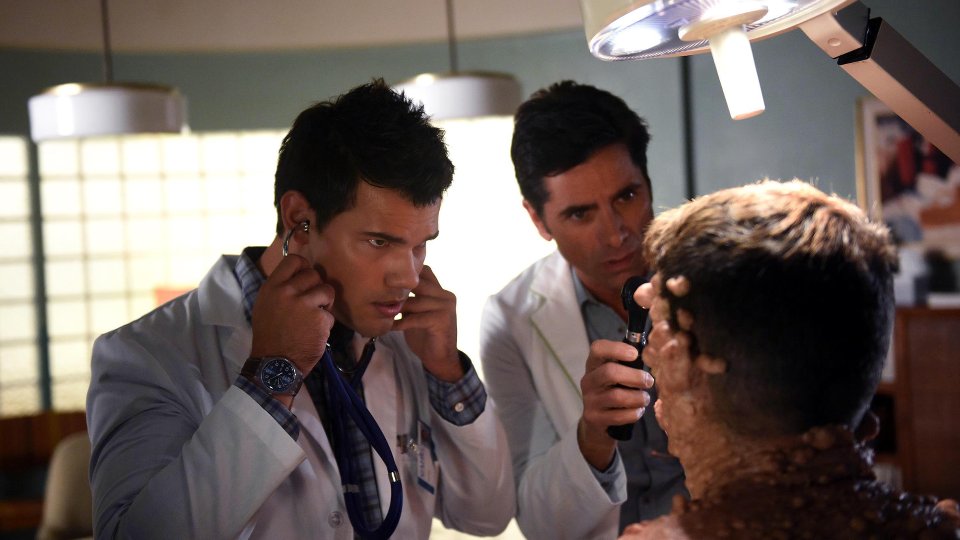 Scream Queens returned in the UK last week and a new killer is on the loose.

The Chanels have been released from the asylum following the events of season one and Cathy Munsch (Jamie Lee Curtis) recruited them to work in the hospital she purchased. Working alongside former sorority sister Zayday (Keke Palmer), the Chanels were also introduced to Dr. Brock Holt (John Stamos) and Dr. Cassidy Cascade (Taylor Lautner).

Hester (Lea Michele) came clean about the murders she framed the Chanels for and is now being kept in an asylum so she can’t hurt anyone else.

The Chanels and Zayday worked with Dr. Brock and Dr. Cassidy to solve the case of a woman diagnosed with werewolf syndrome. Chanel (Emma Roberts) came up with a cure but the patient’s joy didn’t last long when the Green Meanie appeared and beheaded her while she was bathing next to Chanel #5 (Abigail Breslin).

It was also revealed that shady goings on took place at the same hospital back in 1985. Are the two things connected?

The next episode of the season is Warts and All. Chad (Glen Powell) returns and discovers that Brock has a dark secret. Another run-in with the killer prompts Cathy Munsch to seek help from Denise Hemphill (Niecy Nash).

Tune in to E4 10pm on Wednesday to see the episode. Preview it with our gallery below: