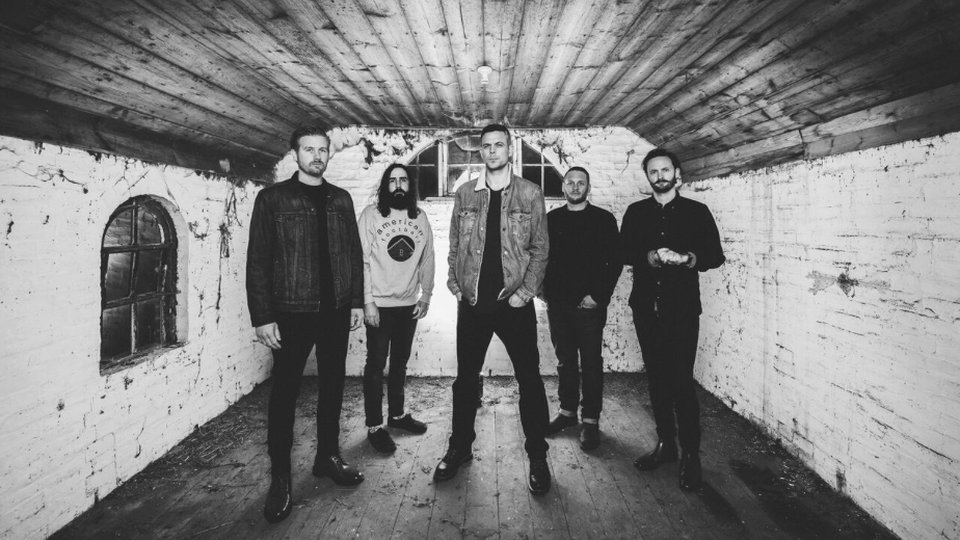 Lonely the Brave are a five-piece band from Cambridge. I’ve seen them play live before, more than once, but not for about a year. Since I last saw them they have released a follow-up album to their debut The Day’s War. Their debut was well received and they have built a following as singles were released and special editions appeared.

They have also completed a seemingly gruelling 2015 European tour. At the Haunt gig, I was stood behind a tall man and he was wearing a Lonely the Brave T-shirt which listed all the gigs, so I have a good idea of the dates and locations. I’m not sure there was a country they didn’t play. I think they must have spent much of their time driving from place to place.

Well, maybe that’s the way to get ahead. Their new album is titled Things Will Matter and it’s also the title of their Autumn UK headline tour. Earlier this year they announced that they will be supporting Biffy Clyro on their European tour when they finish their UK dates. Exciting times, it seems like the hard work is paying off and it is, of course, also due to the influences in their music which includes songs that emulate a stadium-anthem-rock sound as well as instrumentally, a post-rock direction. It’s this, as well as the thoughtful lyrics, that make their music both popular and memorable.

The Haunt was packed to the brim. The band had a different look to them, still dressed in plain T-shirts but with shaven heads and perhaps moving towards a heavier rock style. Generally, it was the upbeat anthems which had the best reception. They opened with the awesome Black Mire and lead vocalist David Jakes took to his usual spot left of the stage to sing. As the songs progressed, each one belted out, Jakes sometimes moved to sing with his back to the audience. When I first saw the band I thought he was a bit of an atypical front man, one not keen to engage with the audience but when you see him sing you realise that it’s passion that drives him. His voice is just superb, full of emotion, on par with Elbow’s Guy Garvey. He is a brilliant new British male voice to watch out for. Whether or not he endeavours to entertain with filler or build a rapport with the audience doesn’t actually matter. We were here to see him sing. He appears to have focused on working seamlessly with the other instruments and that is just fine.

When the band played their cover of Pink Floyd’s Comfortably Numb there was so much audience support, I don’t know if it was just me, but the band looked a bit bored. Except when Mark Trotter picked up speed for the epic guitar solo.

There was a solid performance behind Victory Line, not only the crisp and strong vocals but also drummer Gavin Edgeley, who delivered an energetic accompaniment. The tone of many of the songs is longing and there is a virtually unerring force with which the band deliver and perform across their oeuvre. Another stand out performance was Control. This was a song that got the audience singing along, the chorus of voices is something you would expect in a much bigger venue, and not in a 375 capacity converted cinema. There was a feeling this time, as before, that Lonely the Brave are made for bigger venues. Finally, when it came towards the end of the gig they launched into Backroads. This one starts slowly, and Jakes seemed more at ease addressing the crowd face on. It’s a slow burner and the chorus electrified the crowd who united with arms raised.

The band are on the third date of their tour and although they gave a great performance I think they will continue to perfect the delivery of their set. Jakes struggled with the in-ear monitor and had to abandon it. No doubt this affected their performance. There seemed to be issues with the levels of the instruments and signals went between the band and sound engineer for the first couple of songs. Lonely the Brave delivered an excellent performance despite this, testament to their expertise and experience.

Lonely the Brave are the kind of band that have a broad fan base. If you like rock music and lyrics that are sympathetic to the ups and downs of everyday life then you will find plenty to enjoy about Lonely the Brave. I hope they continue to develop their sound and align themselves with some of the more alternative influences that have guided their inspiration for music so far.

Advertisement. Scroll to continue reading.
In this article:Lonely the Brave