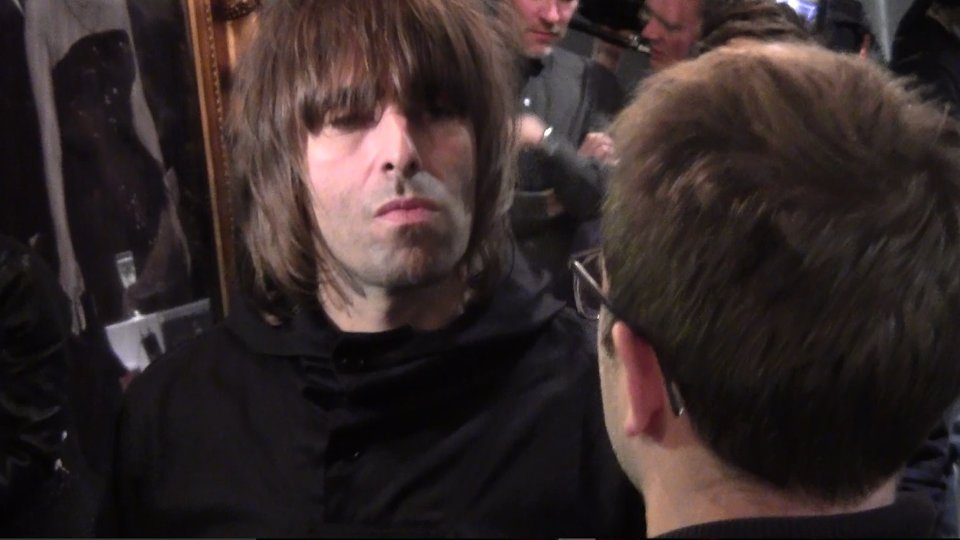 Liam Gallagher does not do things by halves. Having swaggered along Leicester Square’s red carpet for the London premiere of the new Oasis documentary Supersonic, he then jumped into a helicopter and made his way over to Manchester to ensure his homeland didn’t miss out.

Back in June Liam tweeted ‘some clown trying to tell me this film about my fucking band yeah MY band is not premiering in MCR’ – clearly something had to be done about the Londonifying of a film depicting a band firmly rooted in Mancunian heritage. Four months later his tweet is a well-chosen reference to the mode of transportation he currently finds himself travelling from the capital in, from the song which shares the film’s name: ‘She did it with a doctor on a helicopter’.

I do feel some nerves at the knowledge that this larger-than-life rock star, the idol of millions (including myself) for many years, is soaring across the country in a helicopter towards my interview. But I remind myself that I’ve always believed him to be a sound bloke if you strip away the bravado, and when he arrives I can sense genuine humility beneath his signature spirit:

I start my interview with Liam by asking him if the parallel premiere in Manchester was his doing. For a man who is the embodiment of self-importance, he does not rush to claim that his outrage in June is what set things in motion. “I don’t want patting on the back,” he says.

The journalists before me in our frantic huddle have already covered lots about the new film. There are a couple of repeated questions about whether or not he had forgotten any of the events that made it into the film, and why he thinks Noel hasn’t attended the premiere (“I reckon he’s in one of those really big houses eating tofu, while having a face-peel”). And of course: questions about an Oasis reunion. As if this would be the platform to announce one if it were on the cards. So that he doesn’t get bored of repeating himself, I decide to discuss songwriting.

I start by complimenting two of my favourite (and obscure) Oasis songs which he wrote – Boy With the Blues and Guess God Thinks I’m Abel. He says ‘thank you’ which is something I can’t say I’ve heard much in all of his interviews that I’ve watched, and his PR gives me a friendly nudge and smile – this was a good move.

He goes on to tell me about his upcoming solo record: “It’s [a] pretty ‘Working Class Hero’ kinda thing – Lennony vibe, you know what I mean? It’s like acousticy. Then there’s a couple of rock and roll tunes on there, but it’s not Oasis man. It’s not fucking stadium rock, you know what I mean?” I tell him I’m looking forward to it. “So you should be,” he says with a smile. “So am I.”

I continue the songwriting theme with a reference to the fact that he came up with the famous line ‘so Sally can wait’, and ask if he and Noel ever got any closer than that to writing a song together. It goes slightly over his head at first: “we can’t even fucking speak together; imagine writing a fucking song together.”

I clarify I meant back in the day. “He was the songwriter of the band and I was the singer. […] I didn’t wanna be a songwriter. I’m quite happy being the fucking cool bastard. […] I’m not arsed about writing songs – you do it because you have to.” I find this an unusual stance for a man working on his solo debut, but you can’t knock the honesty. I just hope this has no reflection on the craft of his new material.

I am assured by another founding Oasis member that Liam’s solo album is going to be really good. Paul Arthurs (known only as ‘Bonehead’) describes the record as “typical Liam.”

Bonehead, a friendly and animated man, also dismisses the idea of himself making songwriting contributions within Oasis: “I didn’t get a chance. […] I’m not a songwriter. I’m still not a songwriter. I can write a song and I have done, but not on the scale of Noel.”

I comment that Bonehead seems to have maintained a better relationship with the Gallagher brother who turned up that day. “I’ve always been closer to Liam. I’m probably closer with Liam now than I ever was. […] Maybe it’s because we’re outside of the band and we haven’t got the pressure of all that. We can do our own thing. We can ring each other and say ‘do you fancy a weekend in the sun?’ and go and do it.” Bonehead was less than keen to share exactly where the pair head off to.

He mills over the question of, should Oasis reform, would it be the original line-up?

The ultimate question. Judging by the passion of the Mancunian fans at their own bespoke premiere, there are many who would say ‘yes’. I spoke with two approachable rock veterans that night who are both raring to go should they get the call. It’s endearing and agonising to see everyone is still mad for it.

Watch the full interviews with Liam and Bonehead below:

Supersonic is released on DVD and Blu-Ray on 31st October 2016. Liam Gallagher’s debut solo album will be released next year.