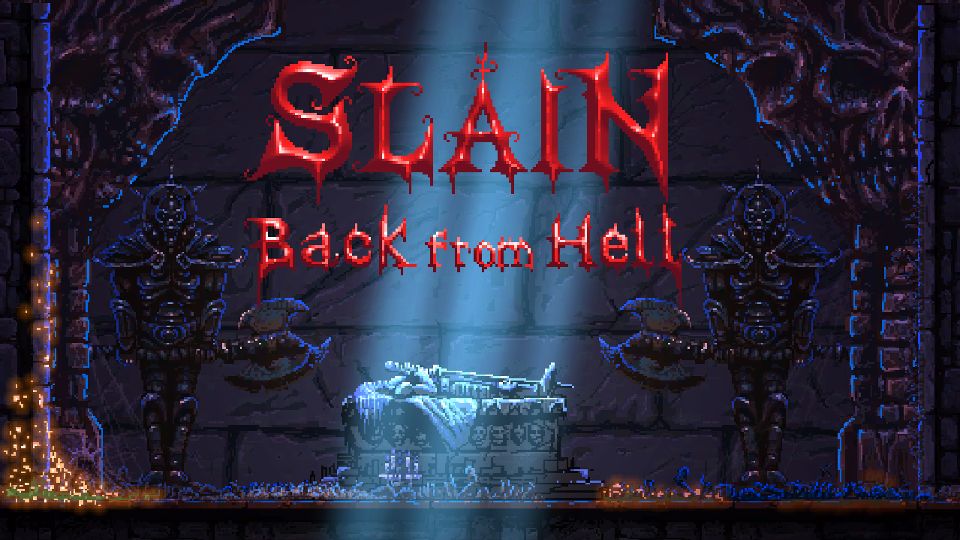 PlayStation 4 gamers can headbang their way to glory while slashing, blasting and shredding a bevy of monstrosities into gory bits with the launch of Slain: Back from Hell. The game was developed by indie game developers Andrew Gilmour & 22nd Century Toys with Digerati Distribution & Marketing handling publishing.

Slain features brutal arcade style combat with bloody, intense platformer gameplay that puts a strategic twist on the classic hack-and-slash games of the ‘80s and ‘90s.

Set in a dark, archaic world, Slain has players take control of a grizzled warrior as they seek to liberate the kingdom from deadly overlords. Using elemental weapons, lethal mana attacks and cunning skill, players will battle and exploit the weaknesses of enemies to either save the doomed land or face being slain themselves. A brooding heavy metal soundtrack from former Celtic Frost member Curt Victor Bryant adds to the ferocity and gothic aura of the game, serving to heighten the intensity throughout the myriad battles.

Watch the Slain: Back from Hell launch trailer below:

After initially releasing on PC earlier this year, Slain underwent a complete overhaul that has been widely praised by critics and gamers alike. Since being revamped, Slain’s Metacritic score has increased 35 points to 75% and the community has lauded Digerati, Andrew Gilmour & 22nd Century Toys for their commitment to Slain’s post-launch update efforts.

“Slain may have began with a rocky start, but our overhaul of the gameplay system and features has made Slain the ultimate gruesome, bloody platformer,” said Nick Alfieri, Director at Digerati. “All those that have played Slain: Back from Hell have praised the updates and we’ve seen our community drawing comparisons to the classic game Castlevania, which we hope PlayStation 4 gamers will experience as well.”

Slain: Back from Hell releases in North America today (September 20th) and Europe tomorrow (September 21st) on the PlayStation 4. It will also be coming to Xbox One (October 5th) and PS Vita later this year.

EF will be bringing you a full Slain review later this month. Check out the official Slain website for more information.

Advertisement. Scroll to continue reading.
In this article:Back from Hell, PS Vita, PS4, Slain, Xbox One