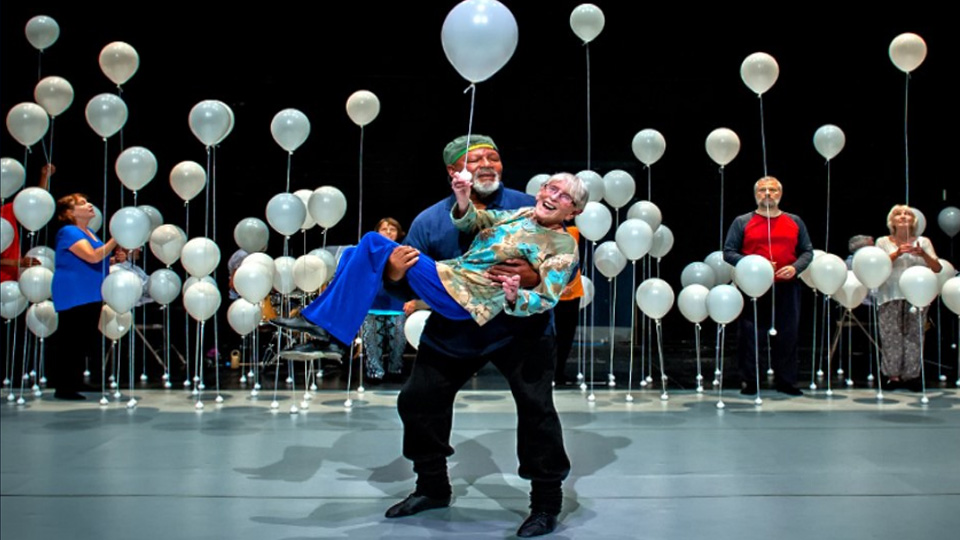 The Performance Ensemble and West Yorkshire Playhouse co-present Anniversary this month on the Courtyard stage. A collection of recollections expressed through movement, monologue and music, the play is performed by a cast aged 55 to 80 with a Dementia-friendly awareness for audiences.

The cast is composed of a collection of artists whose background in theatre ranges between several decades and several months, providing a vast scale of experience. What some of the performers may lack in formal training they make up for in charisma with a tender and tangible onstage honesty. Anniversaries of travel, separation, denial and death punctuate a showcase of ideas performed with a rare naturalism and pride. There is no set to speak of, the characters are real people, the memories true and painful, the laughter real.

Monologues are delivered into microphones in a direct presentation to the audience. The tales are true, with The Performance Ensemble choosing to play only themselves. Barbara Newsome shares the grief for the loss of her son and the memories of a father who claimed she’d amount to little; she proves the latter wrong in a beaming performance which sings with candour and confidence. Equally, Namron describes the scale of his long emigration to London as a child whilst Hum Crawshaw recalls the story of how he came to live with his son. It’s evocative, sincere storytelling; tales one would hear from a grandparent during a quiet, personal moment and never forget.

There is a stirring sadness to some of the material, be it happy times fondly remembered, or lamentation for friends and people who have faded into history. There is, however, a bubbling levity and optimism in the anniversaries which punctuate the piece. One of the funniest is, aptly, also one of the most tragic as Alex Elliott recalls how his heart has been brutally broken in a string of passionate and intense relationships. Like much of Anniversary’s content, it’s a story for many to draw direct comparison and empathise with on a personal level.

Director Alan Lyddiard brings a dreamlike quality to the production with smooth transitions between performances, aesthetically tied together in a cluster of floating balloons. Staging is intentionally minimalist and sparse, exposing the brutal backstage workings of a theatrical space as a canvas to true storytelling. The balloon theme expands into a beautiful spectacle which is simple yet impressive. West Yorkshire Playhouse often manages to pin down redolent visuals without needless complexity; balloons as metaphor for memory is a masterful, indelible concept.

Underscoring much of the performance is The Citizens Orchestra, with superb piano accompaniments including sax, violin, flute and drums. There is a cheerful playfulness to the score which is matched by Tamara McLorg’s heartfelt and convivial choreography.

One can take from Anniversary whatever is brought to it; be it a sense of one’s own history, mortality or aspirations for longevity. The piece is personal, brimming full of sentiment with an earnestness which places it above the usual criticism levelled at drama or musical.

Touching, elegant, gentle and endlessly playful, Anniversary succeeds most is in its honesty which reaches out and touches its audience. There is a sense that the play asks and inspires others to express themselves through performance to share their inner qualities. A mosaic of memories, Anniversary is a moving and tender show which is refreshingly mature in body whilst vibrantly playful of mind. As Hum Crawshaw perfectly sums up; these are voices of people who are not over the hill, but on the top of it.

Samuel Paynehttp://samuelpayne.weebly.com
Reviewer of Theatre in the North, including releases of classic film and television.
Previous article
Charlie and the Chocolate Factory 2016 review
Next article
#CrackTheFeverCode launches on Twitter