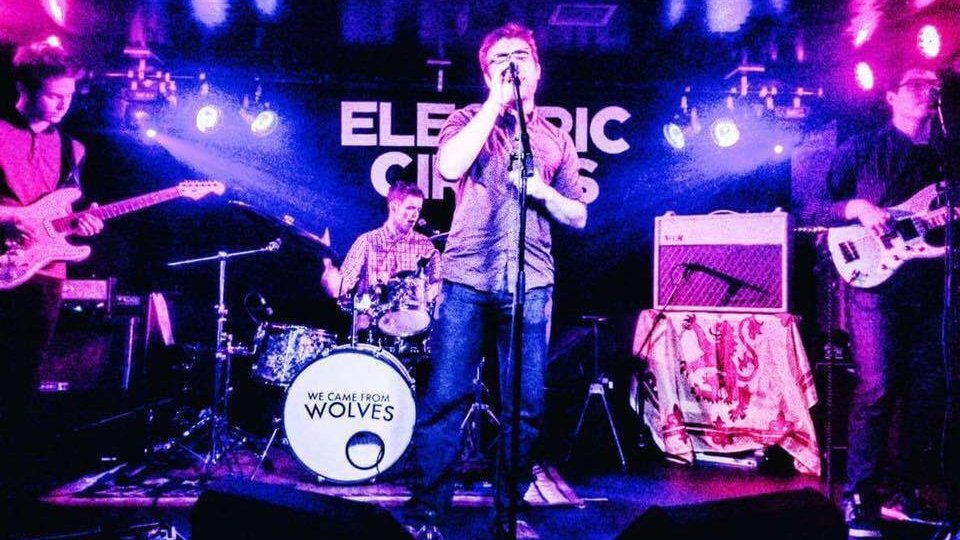 I’ve come across a great new single from a band called Victoria Sponge.

Talk About Tonight is driving, energetic and emphatic and it’s only been out a few days but I’ve already played it an unhealthy amount.

I had to find out what these guys are about, so I got in touch with vocalist Chris Irvine and guitarist Ross Mackay about their Glasgow-based band.

Victoria Sponge – are you guys as sweet as you sound?

Ross: We can only speak for ourselves, but if you have good taste…

How long have you guys been together?

Ross: About four years. But to be honest we only really feel like we’ve properly got going in the last year or so. Most of us are now at university in the same place, apart from Chris who has to commute over to us in Glasgow, but yeah, it’s allowed us to focus more on the band within a really vibrant music scene.

What is the music scene like in Glasgow? Is your style of music suited to their tastes?

Ross: It’s really mixed, which I love. I’ve seen Venga Boys and Snarky Puppy here – that’s quite a variety! Each of us in the band have all got quite broad tastes, which compliments our songwriting I think, but also allows us to appreciate the huge number of live acts that you can see here. I also play guitar in the Strathclyde University Jazz Orchestra, which has been fantastic, and you meet a lot of talented musical folk through things like that.

Chris: The best gigs I’ve ever seen have been in Glasgow. There’s a great atmosphere in the city, and if you’re lucky enough to get a taste of that at one of your own gigs it just gives everything you need to have a great time.

What genre do you guys consider yourself?

Chris: Our official labelling on iTunes is Alternative Rock, but we do have a lot of bluesy funk sounds I think, and as Ross said we all have broad tastes, which means we have many influences. We hope people can hear that when we play. For example, I reckon the songs that I write aren’t too far off from being folk tunes, until the rest of Victoria Sponge get their hands on them. We’re just an interesting mix of musicians that produce – we hope – great material.

Who are these broad influences?

Ross: For me, I love the groove of Vulfpeck-

Chris: The groove of who?

Ross: Educate yourself, mate. Fleetwood Mac, of course, and all hail the guitar wizardry of Guthrie Govan! I mean there’s too many to list in a brief answer.

Chris: I’m into The Beatles like a regular hipster. Love those guys. Also recently Coldplay and Oasis have been doing the runs on my iPod. Maybe I just like people that make a lot of money from their music, who knows…? Set your sights high!

So will you be watching the Oasis documentary next month?

Chris: Absolutely, I’ve devoured all of the documentaries available on YouTube and I need some more Gallagher brother madness in my life! Also going to check out Eight Days A Week, the Ron Howard film about The Beatles’ touring years.

The most current of your influences that you mentioned were Coldplay, and even they may be on the way out soon… Any new(ish) names you guys are into?

Chris: I’m more discovering things from the past really, the recent past… Iain Morrison is a folk singer-songwriter I enjoy. There’s a Glasgow band called Taking Berlin who released a three track EP that I think is great.

Ross: There’s this band Victoria Sponge that are just hitting the scene… Their new single is delicious.

How did you guys come up with it?

Ross: It started off as a bit of a jam at a practice session. I played a thing on the guitar, Jamie (drummer) laid down a beat, Adam (bassist) grooved along with us, Chris made up a vocal melody and some lyrics… It was just all these pieces coming together, and we thought it was damn cool, and it was just a case of polishing from that point.

Chris: It was the first time we’d ever done something like that, because usually we each will bring a song to the group and work on it, flesh it out and such. ‘Talk About Tonight’ was kind of everyone going off and doing their bits from scratch and coming back to everyone else and seeing what happened. It was great; really organic.

Do you think you will be following a similar method going forward?

Ross: I think so – especially now that we’re all in the same place, and we’re going to be really pushing to get gigs and getting ourselves out there in the Glasgow circuit. We’re going to have more time to do that sort of stuff. So yeah, why the hell not?

Chris: No question for me: we absolutely will be. We’ll not just do that, though, because we all still have our own ideas pre-written to try out, but my bandmates are all pretty talented blokes. Why wouldn’t I want to take complete advantage of that?

Who’s the best frontman of all time?

Ross: It has to be Hendrix.

Ross: We supported We Came From Wolves at the Electric Circus in Edinburgh recently, that was fun.

Chris: Yeah that was actually. For me the best gig was the Record Factory in Glasgow for me. It was a scummy promoter that put us on but the tech team and venue were great and the crowd were too.

A scummy promoter? Do expand on this potential slander.

Chris: He’s one of many out there that try to get the band to pay to play.

Ross: You were given tickets, you had to sell a certain amount and then beyond that you could keep the profit, but we’re talking huge numbers here that were unrealistic and exceeded the venue capacity. And several bands on the bill were doing it.

Chris: It’s a scam that happens everywhere, you just have to learn to avoid it. For every crap promoter you’ve got a good one, just look out for them!

On a positive note, what would be your dream venue to play?

Ross: Something big, I guess!

Chris: I like small venues where you can get closer to the crowd, but yeah something big would be an adrenaline rush.

Ross: Maybe something iconic in Glasgow, like Oran Mor or King Tuts, just to say we’ve done it.

What do you think you guys take from Glasgow that you couldn’t get elsewhere?

Chris: Well, none of us are actually Glaswegian, but we have parents who are and obviously the universities are a pull, so we’ve been inevitably drawn to the city. But we have all fallen in love with it a bit.

Ross: When you’ve spent so long in a place like Aberdeen, where the music scene is about as existent as a unicorn, you just get overwhelmed by a city that’s so opposite to that, you know? It’s been great, and personally I think it’s invigorated our music. We all feel pretty full of energy as a band right now. I feel optimistic.

Victoria Sponge can be followed on Facebook and Twitter and their new single Talk About Tonight is now available on iTunes. Watch the lyric video below: