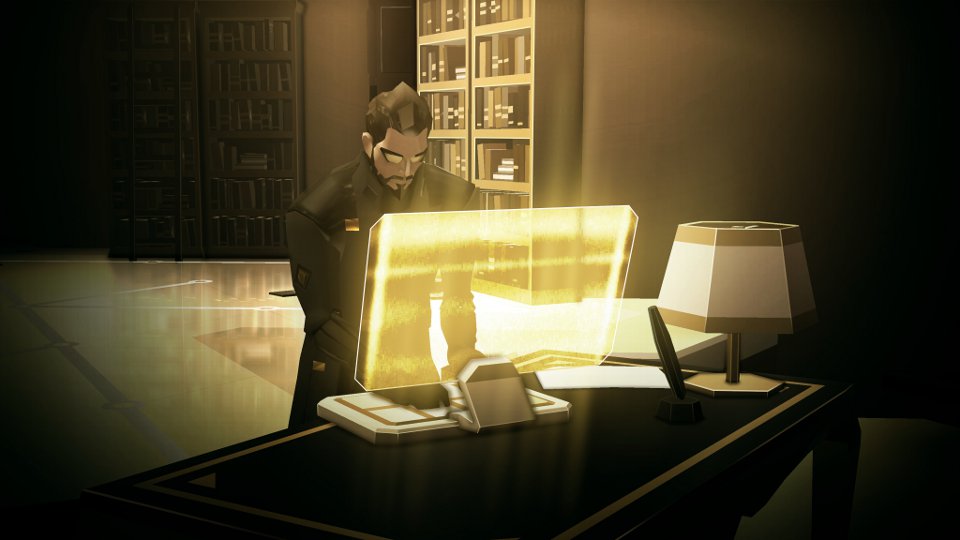 Following on from the success of Hitman GO and Lara Croft GO, Square Enix Montréal are back with a new GO title based on Deus Ex. The GO series takes popular franchises, retains their core elements and turns them into new turn-based strategy experiences.

Deus Ex GO puts you in the role of series protagonist Adam Jensen. If you’ve played the previous GO games and Human Revolution or Mankind Divided then you’ll probably already have a good idea of what to expect from Deus Ex GO.

Each puzzle in the game is a room and your aim is to guide Jensen to the exit. There are a series of connected nodes forming pathways across each room and many of these contain some kind of obstacle for you to avoid or overcome.

The game starts out simple but gradually introduces more types of obstacle which increases the complexity of each puzzle. To begin with there are enemy agents patrolling the paths. You can sneak past some of them while others need you to time your moves just right so that you can sneak up on them to incapacitate them. Should you get spotted they will activate their titan shields making them temporarily invincible.

As you progress through the 50 levels Jensen must overcome turrets, robots and titan shield traps. Hacking is introduced allowing you to turn these obstacles to work in your favour. For example you can hack a turret to kill a guard or use a titan shield trap to block a path.

I found the first 20 or so puzzles to be very easy but after that it began to take multiple attempts to figure them out. There’s a built in hint system if you get really stuck to allow you to keep progressing. Sadly once you’ve played through the campaign there is little reason to come back to it.

However there are additional weekly challenges to keep you entertained and really test your puzzle-solving skills.

Check out some Deus Ex GO screenshots in our gallery below:

Graphically the game looks the part using the same kind of art style seen on the console game. Adam Jensen also looks the same as he does in those games and there’s some nice animation work for his actions.

One unusual thing about Deus Ex GO, that some players won’t like, is the lack of a tutorial mode but I found this to be a refreshing change. So many games have unnecessary tutorials that take forever to play through. Deus Ex GO is rather straightforward to play and easy enough to learn with a little trial and error. It also helps that there’s little penalty other than restarting a room when things go bad.

A bonus for Deus Ex fans, who are also playing the new Deus Ex: Mankind Divided, is that you can link the game with your Square Enix account. Once done your progress in Deus Ex GO can reward you with up to 5 Praxis Kits. These are used in Mankind Divided to upgrade Adam Jenson’s abilities.

Deus Ex GO is not quite as good as Hitman GO or Lara Croft GO but overall I’ve had a great time with it. The puzzles are fun to solve and the later levels will definitely have most players scratching their heads for a little while.