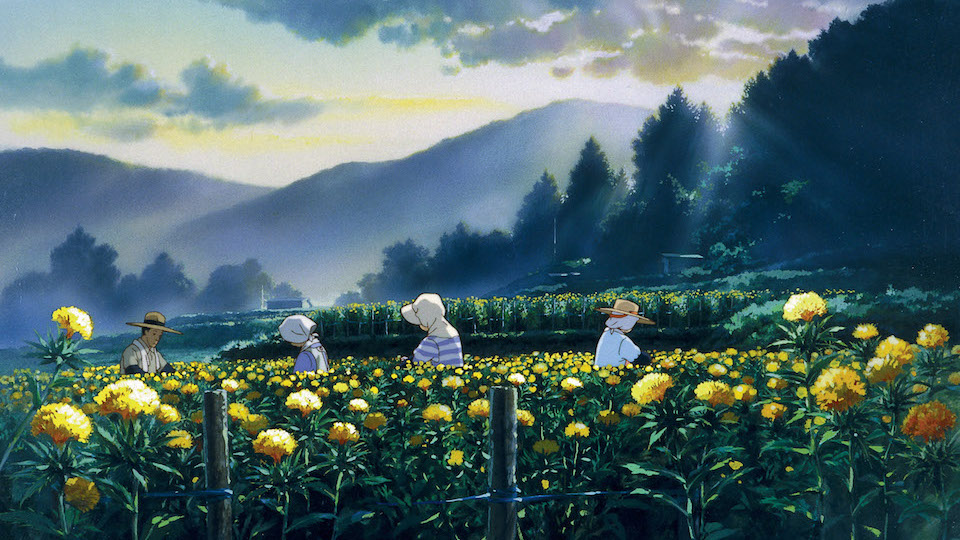 Isao Takahata’s Only Yesterday is an almost forgotten film from Studio Ghibli’s esteemed catalogue of animated masterpieces. It is a rare and beautiful thing to discover something new from one of the giants of Japanese animation, and this film comfortably exceeds the weight of expectation. Following its brief cinematic run, it is now being released on blu-ray with a new English soundtrack, featuring the vocal work of Daisy Ridley (Star Wars: The Force Awakens) and Dev Patel (Slumdog Millionaire).

Whilst I’m sure the purists among you will only watch the film with the original Japanese audio, I can tell you that having watched it twice; once in English, and once in Japanese with subtitles, the English version is not just excellent, it is better. Heresy, I’m sure, but the new script translation by David Freedman, overseen by Studio Ghibli producer Geoffrey Wexler, captures so much more nuance and emotion than the subtitles do. The delicate phraseology and manner of speech is lost in the subs, with many lines of dialogue being clipped and edited for easier reading.

And anyway, who would want to concentrate on words, when the images are this beautiful? Set in 1982, Only Yesterday tells the story of Taeko, a 27 year old, unmarried woman, living and working in Tokyo. For her holiday she takes a trip to the country, where she is going to work in the fields picking safflowers during the harvest. On the sleeper train she is overcome with memories of her childhood, specifically her fifth grade self in 1966. The film seamlessly switches between past and present with dreamlike artistry. Both time periods are clearly delineated, with the sharp, classic anime colours for 1982, contrasted with the muted colour scheme and hazy soft focus of 1966. The white space around the edge of the frame indicating the blurry edges of memory.

When Taeko arrives in the country, she is met by Toshio, a young farmer. As they spend time together a potential romance blossoms, and Taeko becomes even more nostalgic for the past. There are events in her past (some good and some bad) that have shaped the woman she has become, and she must confront and understand these in order to better understand herself. There’s the memory of her first crush, the awkwardness of puberty, the joy of discovering The Beatles, the pain of an overheard conversation not meant for her ears, and the strained relationship with her detached father.

It is almost like an animated Ingmar Bergman film. A sort of anime version of Wild Strawberries. This isn’t a film that western audiences would ordinarily associate with animation, and this is perhaps why it has taken so long for it to be widely available. It is crucially not a kids film. It is nearly two hours long, and there is no fantasy or whimsy, or any of the other supernatural elements so synonymous with Studio Ghibli. This is a film about the emotional weight of memory, the collections of trauma and joy we carry in our subconscious. It is also a film about Japan’s relationship with agriculture, and the role of women in society.

Only Yesterday is an astonishing film. Beautiful and insightful. It perfectly grasps the complex psychology of growing up. All the pain, happiness and embarrassment that stays with us forever. You’d have to be made of stone not to be moved the ending.

In this article:Daisy Ridley, Dev Patel, Only Yesterday, Studio Ghibli